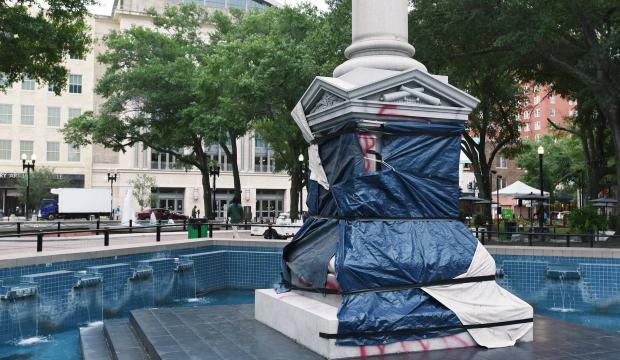 The poll was conducted via live dial to 512 registered Duval County voters between Oct. 2 and Oct. 4.

Duval County has a number of monuments on city property.

The inventory provided by the Parks Department revealed three monuments, put in place between 1898 and 1926; and eight historic markers.

The monuments include the Confederate Monument in Hemming Park, the ‘Monument to the Women of the Southland’ in Confederate Park in Springfield, and a Confederate Memorial Services grandstand at the Old City Cemetery.

Brosche characterizes public sentiment on these monuments as fairly evenly split, and she addressed the state of the statues at a Wednesday luncheon.

Notably: she is cool on a referendum on removal.

“It’s about what they mean to the entire community, not just one section of the community,” Brosche said Wednesday, adding that she doesn’t “personally favor” a referendum.

“I’ve studied what it is we’ve taken to the voters in the past, and I personally have a hard time putting a vote to the majority, to decide [for the minority],” Brosche said, occasioning murmurs from the crowd.

In this article:Anna Brosche, Confederate monuments, University of North Florida