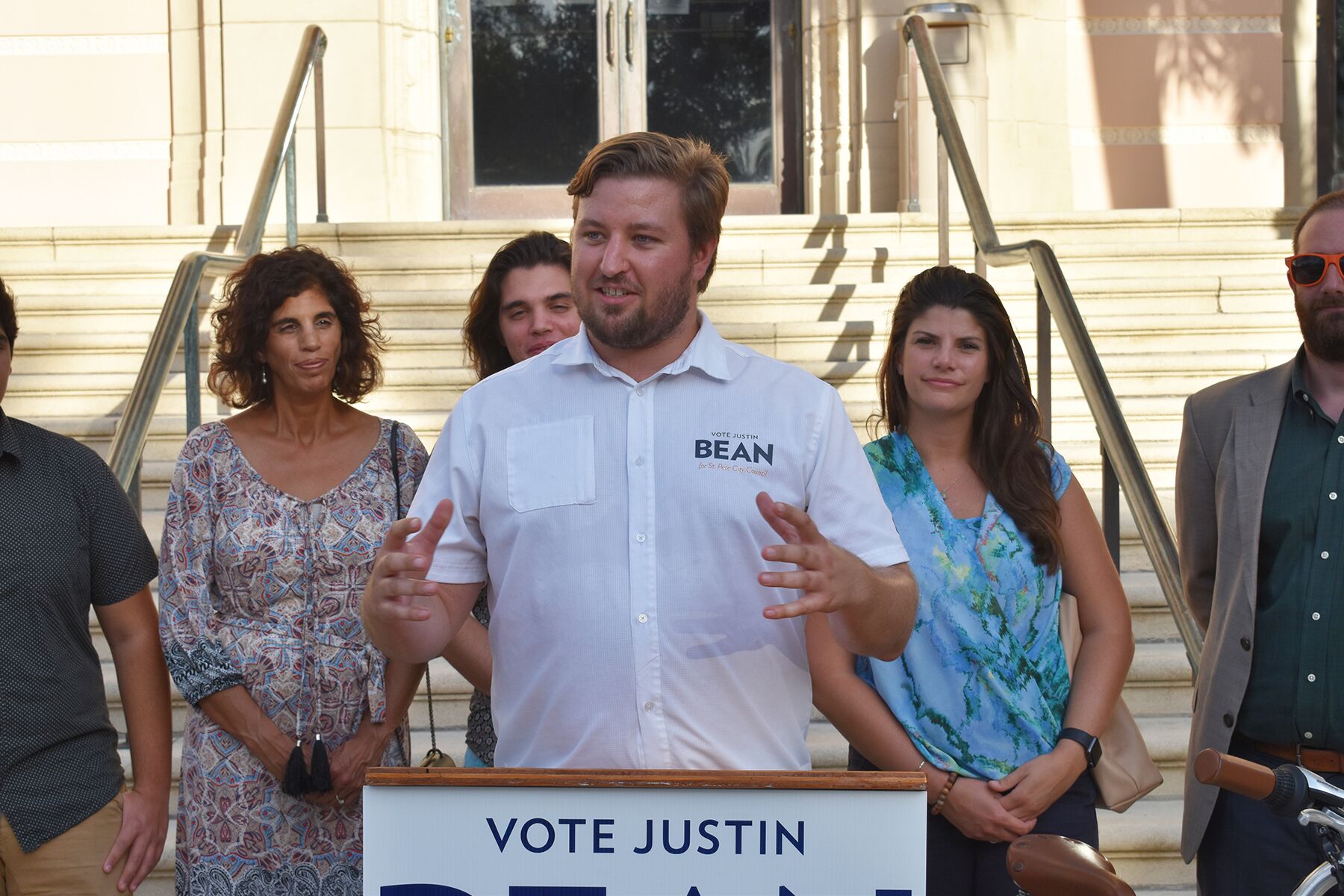 If elected to St. Petersburg City Council, Justin Bean says bringing a grocery store to Midtown is a top priority.

“It’s something that we need to focus on now,” the District 6 candidate told reporters in front of City Hall late Thursday afternoon. He had spent the entire day crisscrossing the city at five locations to highlight his platform as he goes against Gina Driscoll on Nov. 7.

The 30-year-old businessman began the morning highlighting economic development by visiting Jabil in the northern part of the city.

He then jettisoned to Williams Park in downtown St. Petersburg, which allowed him to again remind voters that of his charge there last year to create an official business district to attract economic activity and development. He took a PSTA bus to get there, an experience he said “is not necessarily an easy thing to do.”

Bean explained how the park can be a location to host more public events and then celebrated how many festivals the city already engages in, referring to the just-concluded Shine Mural Festival and the upcoming El Cultura Festival.

From Williams Park he biked over to the Tropicana Field parking lot. The 85 acres of land houses optimistic expectations for redevelopment for the city’s political and business establishments, although when that will take place remains in flux as the Tampa Bay Rays continue to search for a new home.

“When we think of the redevelopment that we’re going to do at the Trop site, we gotta think about how we’re going to heal that wound that’s in our community and bring people back together,” he said, referring to the fact that the the stadium was built on top of the former Gas Plant neighborhood, an African-American community that was dismantled in the 1980s to make way for the stadium.

Bean worked as a consultant on one of the site’s redevelopment proposals. He said could it be enhanced with bike and pedestrian paths.

From the Trop, Bean went to Tangerine Plaza in Midtown, where he made his comment about the need for a grocery store. The lack of a grocery store has become a flashpoint between Rick Baker and Rick Kriseman in the mayoral race after Wal-Mart pulled out earlier this year. Sweetbay did the same in 2013.

At a debate Wednesday night, Baker said he would get a new grocery store built in Midtown. Kriseman said that his staff was looking at “different models,” such as grocery stores with smaller footprints than traditional stores, as well as co-ops.

Bean comes down on Baker’s side of the argument.

“I believe the best case would be a standard, full grocery store and that would be what I would seek to put there first,” he said, “but we gotta work with what we can get, but the community there deserves the best and we need to try to do that first.”

Bean then headed down to Melrose Elementary School on 13th Avenue South — an institution with severe challenges in recent years and was one of a handful of schools featured in a Tampa Bay Times report on struggling schools. He said the city needs to improve and expand on early childhood education. He said that was important for some people who currently don’t qualify for some father programs, or may qualify, but aren’t college-bound to get good paying jobs and stay in the community.

He then traveled to the Grand Central District (28th Street and First Avenue South) to talk about workforce housing.

Regarding the increasing concerns with gentrification and rising rents on Central Avenue, Bean said he agreed with Mayor Kriseman that the unique small businesses dotting the neighborhood are what make St. Petersburg “an amazing place to live.” But he disagrees with the mayor’s thoughts about limiting chain outlets in the area, saying that people enjoy them.

“I don’t think limiting what goes where will have a greater economic impact but I do want to keep the local feel as much as possible,” he said.”But I don’t think putting a ban is going to accomplish that, so I would look to do what I did at Williams Park, which is start a business district to create an identity for a place.”

The Bean-Driscoll match figures to be a close race, as Driscoll and her supporters are emphasizing the political party differences (she’s a Democrat, he’s a Republican) in a city that leans left but is officially a nonpartisan contest.