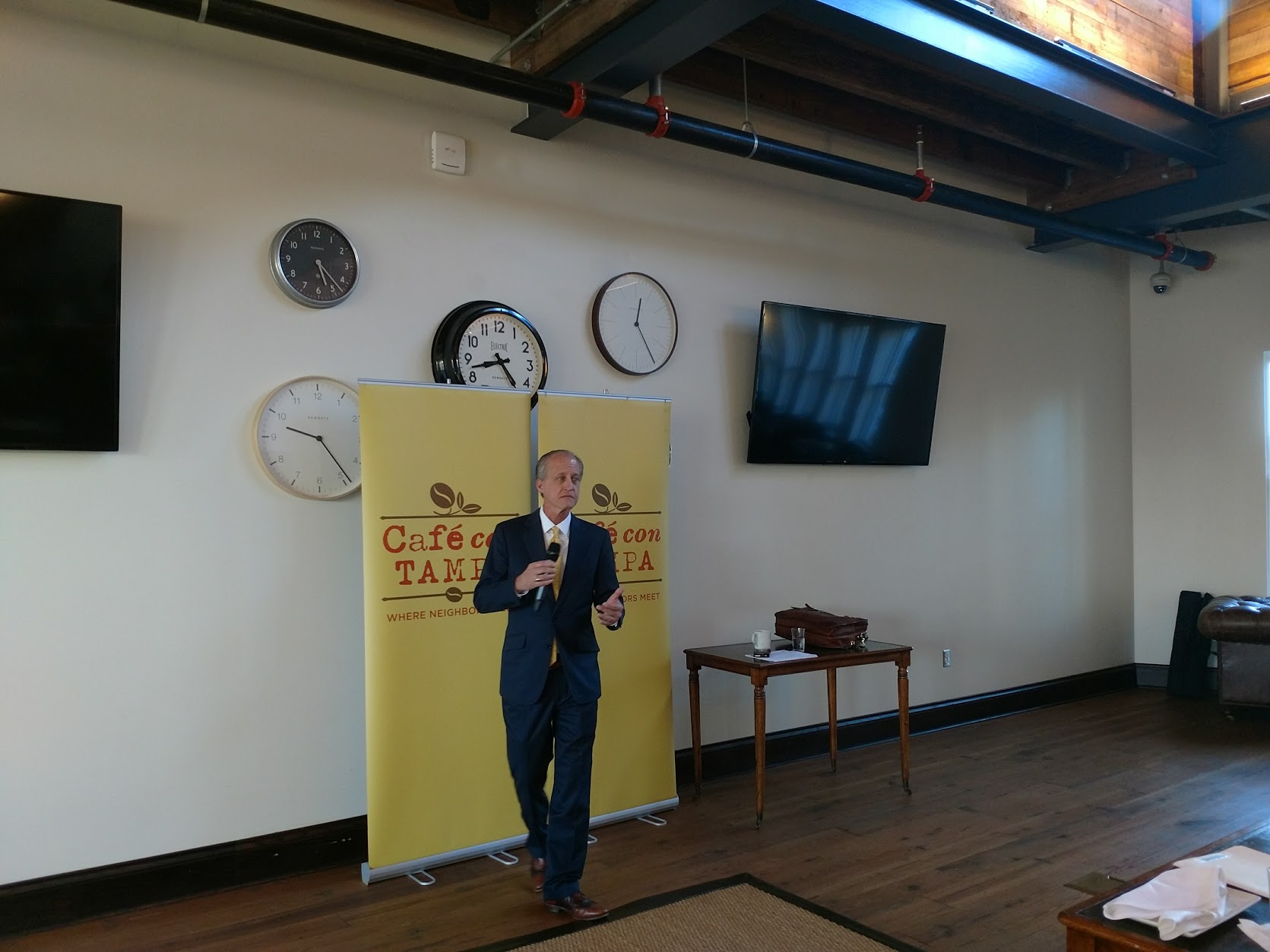 A proposed constitutional amendment that seeks to automatically restore some felons’ voting rights appears more likely than ever to come before Florida voters next year.

But ballot access is only one step toward becoming law.

The amendment must pass with 60 percent of voters next November — no sure thing since it will likely face a well-financed opposition campaign.

Offering a flavor of that counter-argument is Richard Harrison, executive director of Floridians for a Sensible Voting Rights Policy, a nonprofit formed to defeat the constitutional amendment.

The proposal would not apply to murderers or sexual felons, Harrison explained at Cafe Con Tampa the Oxford Exchange in Tampa Friday morning. He noted that it leaves far too many other violent felons eligible to get voting rights back.

“It doesn’t make sense in our view to treat the entire spectrum of felonies as though they are all the same,” the Tampa attorney told an audience of dozens of mostly supporters of the proposed amendment.

Florida is one of three states that permanently revoke civil rights of anyone convicted of a felony, a system that has disenfranchised an estimated 1.6 million people. Even after felons complete their sentences, pay their fines and serve probation, they must wait at least five years to ask the state to restore their rights, which can take a decade or more.

During his tenure as governor between 2007-2011, Charlie Crist made it easier for former felons to regain their rights, restoring the ability to vote to more than 155,000 felons. But in 2011, Rick Scott reversed that change, mandating a waiting period before felons could even apply for clemency. Fewer than 3,000 people have regained voting rights since Scott took office.

Harrison mocked supporters who cite petty crimes that qualify as felonies in Florida as an argument to change the current law. He said those advocates don’t want to talk about ex-felons who abuse their wives or shoot store clerks.

“These are serious, serious crimes, and they are not the same as mylar balloons or lobster traps,” he said. “What’s wrong with this amendment is that it makes no distinction.”

For years, proponents have argued that the restoration of voting rights offers a second chance to a man or woman who previously erred but paid their debt to society.

That’s not good enough for Harrison, who says if it’s only about second chances, the amendment should be limited to first-time offenders, which isn’t in the language of the proposed amendment.

Harrison did concede there should be a faster track for nonviolent first offenders. He also said restoration of voting rights should be more difficult for repeat violent offenders.

With the vast majority of the country granting ex-felons the automatic right to vote after they have completed their sentences, South Tampa resident Jen McDonald offered to Harrison the example of the state of Vermont, which along with Maine, is on the complete opposite side of the argument as they allow prisoners to cast a ballot.

Harrison replied that with a population that he said was 98 percent white, he was “confident” that the Green Mountain State was not representative of Florida or much of the rest of the nation.

It was the first time race entered into this conversation, but it was always a part of a larger dialogue on the issue.

The perception has always been that the majority of ex-felons are black, and thus more likely to vote Democratic at the polls. However, the Brennan Center for Justice puts the number of ex-felons in Florida who are black at approximately 20 percent of the population.

Harrison immediately responded by citing the law was written in the 19th century (“it wasn’t my idea”) and that the 1968 Constitutional Revision Commission failed to change it when they had the chance.

East Tampa businesswoman and activist Dianne Hart disputed Harrison’s contention that first-time offenders don’t go directly to prison. She said she knows people who have been out of prison for decades and still don’t have their rights restored.

“There’s something wrong with this system,” Hart said, eliciting applause.

“I’m here to say to you very politely, I believe in a fair fight, but you’re not going to win it,” declared Donna Davis, a Black Lives Matter activist.

The discussion comes during a time when advocates for the amendment are confident that the measure will get a million signatures by the end of the year.

The Florida Division of Elections website currently shows that the “The Voting Restoration Amendment,” has 301,064 verified signatures.

This week, Desmond Meade, president of the Florida Rights Restoration Coalition, told Florida Politics that his group has hundreds of thousands more signatures waiting to be verified, and more than 750,000 signatures in hand.