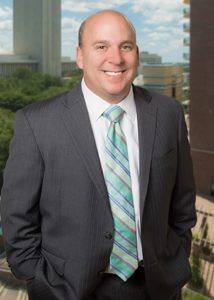 As a member of Florida’s legal community, I take very seriously any proposed changes to our state’s constitution.

In my role as a member of the Florida Constitution Revision Commission (CRC), I will carefully weigh any proposal before us based on the need to have these proposals embedded in our state’s most powerful legal document.

While amending our constitution is not something I take lightly, I do feel strongly about a proposed constitutional amendment I put forward called Marsy’s Law for Florida (CRC Proposal 96). This measure would ensure that victims and their families are provided with the same level of rights and protections as those given to the accused and convicted.

Marsy’s Law for Florida is a pro-victims’ rights proposal, but to me, it is more about bringing equity to the criminal justice process.

The United States Constitution enumerates 20 distinct rights to those accused or convicted of crimes. The victims or the family members they leave behind when a tragic loss of life has occurred have absolutely no rights. While those who are accused or convicted have 20 different rights, the victims and their families – Floridians who were thrust into the criminal justice system by the acts of others – have none. There is no equity in that.

I want to be very clear that the accused are entitled to their rights, as they should be. They deserve to have every single right currently provided to them under federal and state law. Nothing should change there at all.

What should change is that victims should have the same level of rights and protections too.

The U.S. Constitution is silent on victims’ rights. Our state constitution does not have to be.

Individual states have the power to include victims’ rights and protections in their constitutions. Most states have already done so. Florida is one of only 15 states that does not provide constitutional-level protections for victims of crimes. As the third largest state in the nation, we should be leading the way on the issues facing our society, including victims’ rights, not lagging behind.

Marsy’s Law for Florida is the answer. This measure would provide victims of crime and their families with clear, enforceable constitutional protections – just the same as those afforded to the accused and convicted. Nothing more and nothing less. By giving victims and their families co-equal rights to the convicted and accused, we will empower them to take an active role in their case and guarantee that they, at least, have the ability to be heard.

Marsy’s Law is gaining momentum across the country. It has already been enacted in six other states. Most recently, in November, Marsy’s Law passed in Ohio with 83 percent of Ohioans voting in favor of it. We know there is overwhelming support for Marsy’s Law here in Florida.

According to a poll conducted in October, 87 percent of likely Florida voters believe victims should have, at the very least, the same level of protections in the state constitution as those given to those accused of committing crimes.

I appreciate the support of Floridians and the support of my fellow CRC members Patricia Levesque, Darlene Jordan, Fred Karlinsky, Jeanette Nuñez, Brecht Heuchan and Sen. Darryl Rouson who are co-sponsoring my proposal.

We have a unique, once-in-20-year opportunity to ensure Floridians who are victimized, and their families, are treated fairly following a crime. Let’s bring equity to our criminal justice system. Let’s pass Marsy’s Law for Florida.

Tim Cerio is a member of the 2017-2018 Florida Constitution Revision Commission and an attorney who practices law in Tallahassee.

nextSunburn — The morning read of what's hot in Florida politics — 1.19.18