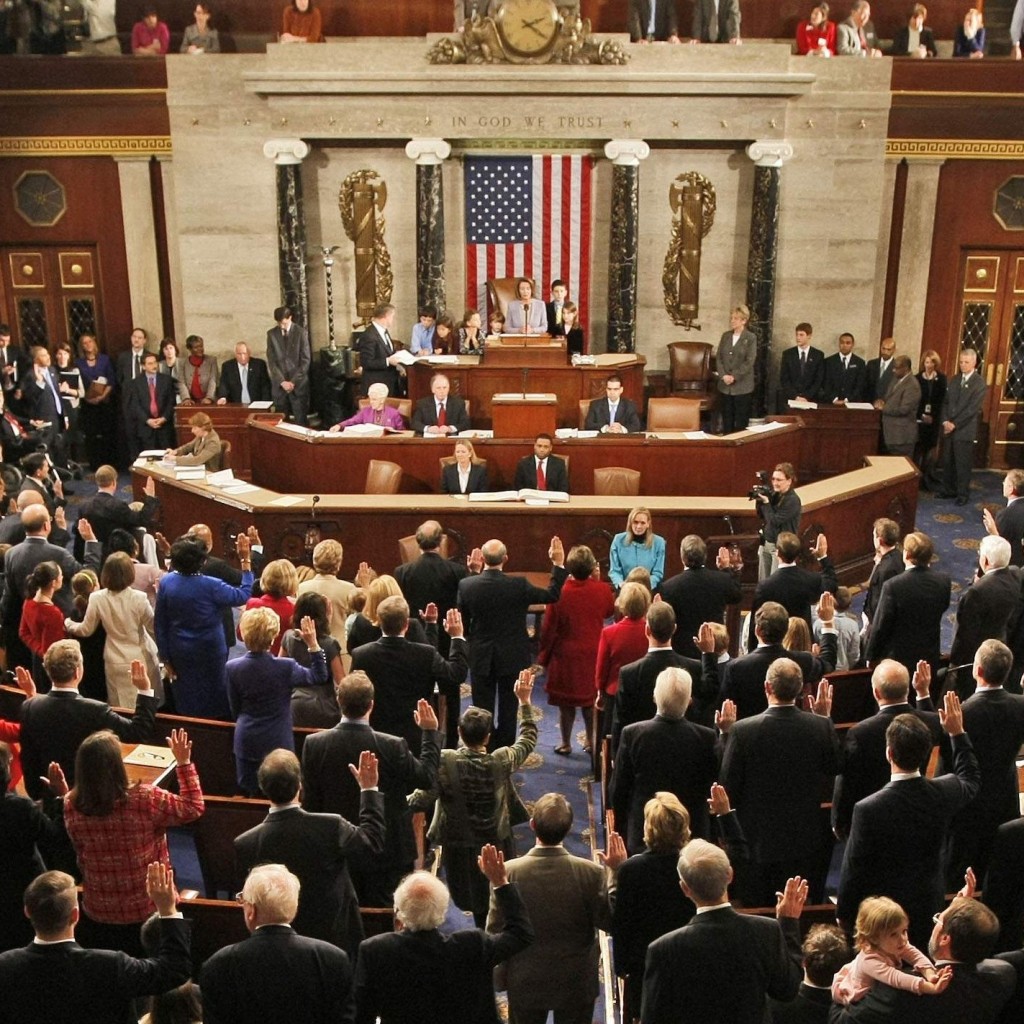 Among the immediate responses to the memo’s release:

“The recently-released “FISA memo” from the House Permanent Select Committee on Intelligence should cause all American citizens to be outraged, regardless of political affiliation. Truth, justice, and transparency are not partisan concepts — they are pillars of the American government.

“For FISA surveillance to be used for partisan political gamesmanship is nothing less than an assault on democracy itself. The DOJ and FBI spied on American citizens associated with the Trump campaign based on the unverified claims made in a dossier paid for by the Clinton campaign and the DNC. This is repugnant on every possible level. The other abuses detailed in the memo are equally horrifying. FBI agents leaked information to the media, then used the ensuing news stories as a justification for renewed FISA surveillance. This is a wanton miscarriage of justice, and the stuff of tin-pot dictatorships and banana republics — not the United States of America.

“I read the memo as soon as it was released to Members of Congress, and my heart sank. Not only did it lay bare a systemic pattern of abuse within the FBI and the DOJ, it confirmed my worst fear: America’s free and fair elections were being threatened from within. Our own Justice Department worked to tip the scales of justice, exploiting the tools of the intelligence community in order to benefit one political candidate. This is an American nightmare.

“Sixty-four other Congressmen joined my letter, and my fight to release the memo. Our calls for transparency were met with opposition from Democrats, from the Justice Department, and from FBI leadership. Today, with the release of the memo, our hard work came to fruition.

“I call on every American citizen to read this memo, not with preconceived partisan rancor, but with clear eyes and open minds. We must work together to ensure these atrocities never happen again.”

“As the Former Vice Chairman of the House Permanent Select Committee on Intelligence, I am outraged that Republicans wrote a classified memo and then voted to make it public in order to undermine the Mueller investigation. The partisan memo is rife with misrepresentations and inaccuracies, and it was released for purely political reasons against the advice of the FBI and the Justice Department.

“Even more shocking is the fact that House Republicans on the Committee blocked a counter-memo on the same subject from being released, preventing any refutation of their partisan smear-campaign. Their decision to politicize the intelligence and selectively release information to drive a political narrative is extraordinarily reckless, and does a grave disservice to the brave men and women in our Intelligence Community. For weeks, social media accounts linked to Russian networks have saturated the airwaves calling for a release of the memo. I am stunned that Republicans actually fell for it.”

“As part of this committee’s responsibility to conduct oversight over the U.S. Intelligence Community, we must ensure that individuals in the IC are not using political work product as a means to obtain warrants to conduct surveillance on American citizens.

“We feel that the so-called dossier was just that – a political document – and the American people need to know that. The intent of this memo is to shed light on past abuses in order to effectively prevent future abuses of the Foreign Intelligence Surveillance Act and similar laws governing the activities of the IC. It is not, in any way, intended to influence or undermine FBI Special Counsel Robert Mueller’s ongoing investigation into Russian interference in the 2016 election.”

“Trump and Republicans in Congress are undermining American law enforcement, the Department of Justice and intelligence professionals in an attempt to discredit the Special Prosecutor’s investigation into Russian interference with our election, financial payoffs and obstruction of justice. The refusal to allow the release of a corresponding comprehensive response memo by Intelligence Committee Democrats is an intentional attempt to suppress the full truth. I doubt the American people will be fooled by these deceptions.

“The DOJ emphasized to Chairman Nunes (who was supposedly recused from the investigation) that the decision to release classified information without DOJ and FBI vetting was ‘extraordinarily reckless.’ The selective release and politicization of classified information sets a terrible precedent and will do long-term damage to the Intelligence Community and our law enforcement agencies. If potential intelligence sources know that their identities might be compromised, those sources will simply dry up at great cost to our individual safety and national security. The Republican document mischaracterizes highly sensitive classified information. It fails to provide vital context and information contained in DOJ’s FISA application and renewals, and ignores why and how the FBI initiated, and the Special Prosecutor has continued, its counterintelligence investigation into Russia’s election interference and links to the Trump campaign. The sole purpose of the Republican document is to confuse the American people and undermine confidence in the Special Prosecutor’s investigation. This is one of the more shameful episodes in the history of the U.S. Presidency and some in Congress who are trying to protect their personal interest at the expense of the national interest.”

“By releasing this memo, the president of the United States is undermining the credibility of our intelligence community and serving a huge victory to Vladimir Putin, the Russian government, and many other intelligence services.”

“President Trump made the right decision to allow for the release of the memo to the American people.

“The memo demonstrates how politicized federal law enforcement had become during the Obama administration. The police power of the state must be blind to politics. There cannot be two standards of justice, one for Republicans and another for Democrats. We must return to a Federal Bureau of Investigation and a Department of Justice that we can trust. The American people deserve transparency and releasing this memo is a step in the right direction in restoring faith in our justice system.

“I urge Attorney General Sessions to continue doing all he can to ensure each and every American receives equal justice under the law.”

“This is a deliberate and desperate effort by Donald Trump and the Republicans to undermine Special Counsel Robert Mueller’s investigation of Russia’s interference with our election and possible obstruction of justice by White House officials. Not only has the FBI expressed grave concerns about the memo’s accuracy, but Justice Department officials believe its release endangers our national security. Republican efforts hands yet another win to Vladimir Putin. The Democrat’s memo must be released so that the public can get to the truth.”

“I am a strong believer in open and transparent governance. Making this memo public is the right thing to do and those that seek the truth should welcome the opportunity to expose any flaws in the process used by their government to gather information. No information vital to national security has been released and the leadership at the FBI should welcome this factual information, not seek to discredit it. When presented with the facts, the American people tend to get it right. In December I called for a purge, not of anti-Trump employees, as some have critics have claimed, but of the bad actors within the FBI and DOJ. The overwhelming majority of those employed by these agencies do an outstanding job every day, and we must make certain that the few who choose to politicize intelligence gathering and law enforcement are removed.”

DeSantis, from Ponte Vedra Beach, got a quick gig on Fox News to talk about the memo, and then he added this on Twitter:

“It answers the question about did the @FBI used this Democrat Party-funded dossier to obtain surveillance – and the answer to that question is yes.”

“The interesting thing about this memo was that a lot of journalists in Washington were against releasing this.

“This is a deliberate and desperate effort by Donald Trump and the Republicans to undermine Special Counsel Robert Mueller’s investigation of Russia’s interference with our election and possible obstruction of justice by White House officials. Not only has the FBI expressed grave concerns about the memo’s accuracy, but Justice Department officials believe its release endangers our national security. Republican efforts hands yet another win to Vladimir Putin. The Democrat’s memo must be released so that the public can get to the truth.”

“The release of the HPSCI memo today was important for greater transparency and oversight, serving the public interest. FISA collections are part of a uniquely critical program that supports global US national security. The recently passed and signed FISA Amendments Reauthorization Act will help provide some additional important oversight of this program, to prevent abuse and violation of American citizens’ civil liberties. There are thousands of courageous and dedicated men and women who serve the FBI, DoJ, and other federal intelligence agencies, and it is disappointing that the missteps of several high-ranking officials are tarnishing their work.”

In order for Americans to have trust in our democracy, Republicans must put partisanship aside and abandon efforts to shield the President from a legitimate investigation. It’s on all of us to prove that justice is worth defending.

“The DOJ called this ‘extraordinary reckless.’ The FBI expressed ‘grave concern.’ The memo-istas speak of a coup d’etat by the deep state.

“I’m on the side of the men and women who are working tirelessly to defend our country.”

Outside of Congress, the comments included this from Levine, on Twitter:

He also tweeted, “It is a sad day when Washington politicians choose to attack the agencies that keep us safe, rather than work together on the problems that affect our families.”

Former Republican U.S. Rep. David Jolly of St. Petersburg, who now is a strong #NeverTrump critic of the administration and its supporters in the party:

Folks, starting today, this is no longer about the Russians. This is now about the GOP.

“Florida Republicans are helping to sabotage the Federal Bureau of Investigation, risk our country’s security, and defy the requests of the leaders of our intelligence agencies, including the Trump Justice Department. Florida Republican Congressional members failed to protect Americans, that includes Rep. Tom Rooney, and Rep. Ileana Ros-Lehtihen, who sit on the House Intelligence Committee and could have prevented this memo from being released.