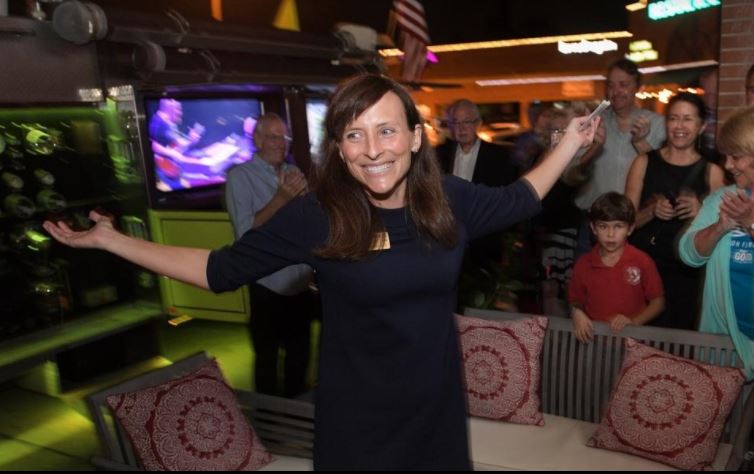 No matter what candidates said or did, or whether they ran embracing themselves with the president, or running as their own style of Democrat, it just didn’t matter. Voters were looking to send a message, and people who had Democrat on their name tag were the only vessel that existed.

My model for Sarasota going into Election Day said that if Republicans turned out between 2,000 and 2,500 more voters than Democrats during the day, Margaret Good would hold on, but it would be tight.

But as the margin demonstrated, this wasn’t a normal election.

Yes, Margaret was a good candidate, and yes, candidates and the campaigns they run matter. Yes, it helped that there was a national focus on the race, Vice President Joe Biden endorsing, grassroots money from everywhere — nor did it hurt that Corey Lewandowski came to town to reinforce that message.

All of these things mattered.

In 2010, a lot of fantastic candidates lost, and lost for reasons outside their own control. The lost because voters wanted to send a message, and since the president wasn’t on the ballot, they used the only proxy they could.

Not all special elections are created equal, and not all outcomes matter the same. This one probably matters more than most.

Here’s a few of my reasons why.

First, let’s go back to a little reminder about Florida. Most of Florida mirrors someplace else in America. Why did Donald Trump go to Pensacola to do rallies for Roy Moore? Well, that part of Florida is very similar to the deep south.

Go to a Jets/Dolphins game in Miami, and you might think you are at a Jets home game, or a Steelers/Jaguars game in Duuuval, and in addition to seeing Blake Bortles lead the almost-AFC Champions, you will get a good sense of where a lot of Duval comes from.

So, the voters here, in large part, have more in common with voters from suburban communities in the Midwest. In other words, these are the kinds of voters who voted for George W. Bush, voted for Barack Obama — at least in 08, and in many cases, also in 12, then voted for Trump. There are red states and blue states.

This district is very white and has an older average age than most. For evidence, among the voters who voted early, 94 percent were white, and 90 percent were over the age of 50 — two numbers that based on the overwhelming Republican Party advantage on Election Day will likely only rise.

In fact, out of the 27,000+ voters who have already cast a ballot, just over 900 are under 35. In other words, this is not a district where change comes from younger ethnic voters surging, as it has in many other specials around the country. Change comes here two ways: Democrats voting, and swing voters sending a message.

Personally, I’ve always been a bit obsessed with this district. Besides being a great community to visit, when I first worked for the legislature, this district was represented by a Democrat, Shirley Brown, and in 2006, when I ran the Florida House Democratic Caucus, winning this seat back was one of my personal goals.

In 2008, we laid down a real marker here during the presidential campaign, putting a real operation on the ground, sending in both Obama and Biden, and almost winning the county for the first time since FDR.

Why? Because if we are doing the things we need to do well here, we are going to do well in a lot of other places.

One other factoid about the district: The last two times the Democrats won this seat in an open seat: 1992, and 2006, both pretty good years.

Last time Republicans won it from a Democratic incumbent: 2010, not exactly a great year for my team. You get the idea.

So, here are a couple of my takeaways.

Largely the story of special elections around the country, women were the story here in Sarasota. Before Election Day, women were driving turnout, and while we don’t have Election Day data yet, I assume this pattern continued. Democratic women make up 19 percent of registered voters, but make up 26 percent of voters so far in this special election.

In fact, while district-wide turnout for the early vote was 21 percent, turnout among Democratic women is 30 percent. And these weren’t just super voters: Good was turning out a lot more Democratic women who had little or no primary voting history.

I thought Good was up somewhere around 8 points going into Election Day (her pollster told me his model had her up 11, and yes Tom, I said that seemed a little “rosy”) — and that was based on her winning about 15 percent of Republicans and winning a sizable majority of NPA voters.

She ended up ahead after Early Vote by 12 points, which means she had to be winning NPA voters by a margin of close to 2:1. In addition, Republicans had roughly a 16-point advantage on Election Day in terms of voters, and for her to maintain a strong win, she needed to maintain similar margins.

If you go back to 2006 or 2010, one of the signs that the wave was coming was chunks of NPA voters began to really perform as partisans. You’d see it first in the self-ID question in polls, where polling was coming back more Democratic or more Republican than it should, and same in the early voting.

Not all NPA voters are created equal, but if older white NPAs — driven by women turning out — are performing more Democratic, that’s going to be a good sign for 2018.

I’ve argued for some time Trump fundamentally misread his own election (something Democrats have also been guilty of). Trump has been gambling he can be a 40 percent president and appeal to a small segment of hard-right voters and be sustained by them, but last night was just the next proof point that this is toxic for the Republican Party, at least among swing voters.

Nights like this require two things: the “Blue Wave” and the “Red Revolt.” I lived the opposite in 2010, where Republicans came out of the woodwork, and elements of the Democratic coalition either stayed home or sent a message with their vote.

Republicans outnumbered Democrats by 13,000 in this district, and by roughly 2,500 in terms of people who voted in the special election.

Putting a finer point on it: On Election Day, Republican voters outnumbered Democrats by over 2,000. They only won the day by 110 votes. A bunch of Republicans chose to revolt today — both by not voting and by voting for Good.

In years like this, when swing voters are frustrated with the incumbent president, their only vehicle to express their frustration is through members of the incumbent party. And in HD 72, that revolt happened with center-right voters — which in some ways, is why this matters more than some other races.

Just as Democrats struggled in 2010 and 2014, when their base voters stayed home, as Obama proved in Florida in both 08 and 12 — and in a lot of states in the Midwest in both cycles, Republicans face real math problems if they can’t run up the score with voters like these.

So yes, this matters. It matters for confidence, but more than anything, it matters because this shows center-right moderates felt the need to send a message — and the only way they could send a message is to vote against the president’s party.

And trust me, having lived through 2010 and 2014, this is the biggest challenge Republicans will face in the coming months, figuring out how to navigate their own base, while still talking to voters who are dissatisfied with the direction of the presidency.

Energy around this race was ridiculous.

Good received almost 3,000 contributions in the last month, which is pretty much unheard of in a State House race. I had Democratic friends from literally every corner of the country asking how they could make phone calls or help out.

The folks on the ground did a great job of harnessing grassroots energy. I remember in 08, sometimes it is hard just to guide the mob of supporters in the same direction, and just like in the Miami race, the party folks from House Victory, the FDP, and the rest of the progressive groups are working together, not against each other.

Terrie Rizzo, the FDP Chair; State Rep. Kionne McGhee, the incoming Democratic Leader, and Reggie Cardoza, who runs House Victory, all deserve real credit in sticking the sword in the ground here and seeing it through. In addition, congratulations to one of my best friends, pollster and strategist Tom Eldon, who I think is now 5-1 lifetime in this seat.

And to the GOP team that lost, I’ve been there. In 2010, more often than not, all you could do was never enough.

Nine months out, the win matters for what it says about politics now, but it in some ways, it matters less about Florida than it does about those parts of the country where these Florida voters come from.

But more than anything, I do think we are in this for a while.

Voters keep voting for change, but as long as Washington keeps reading their calls for change as a mandate for one way, just as we’ve seen a lot of this for the last decade, I think we will see more nights like this for some time to come.

previous'Leave it be': New ad for gambling initiative out