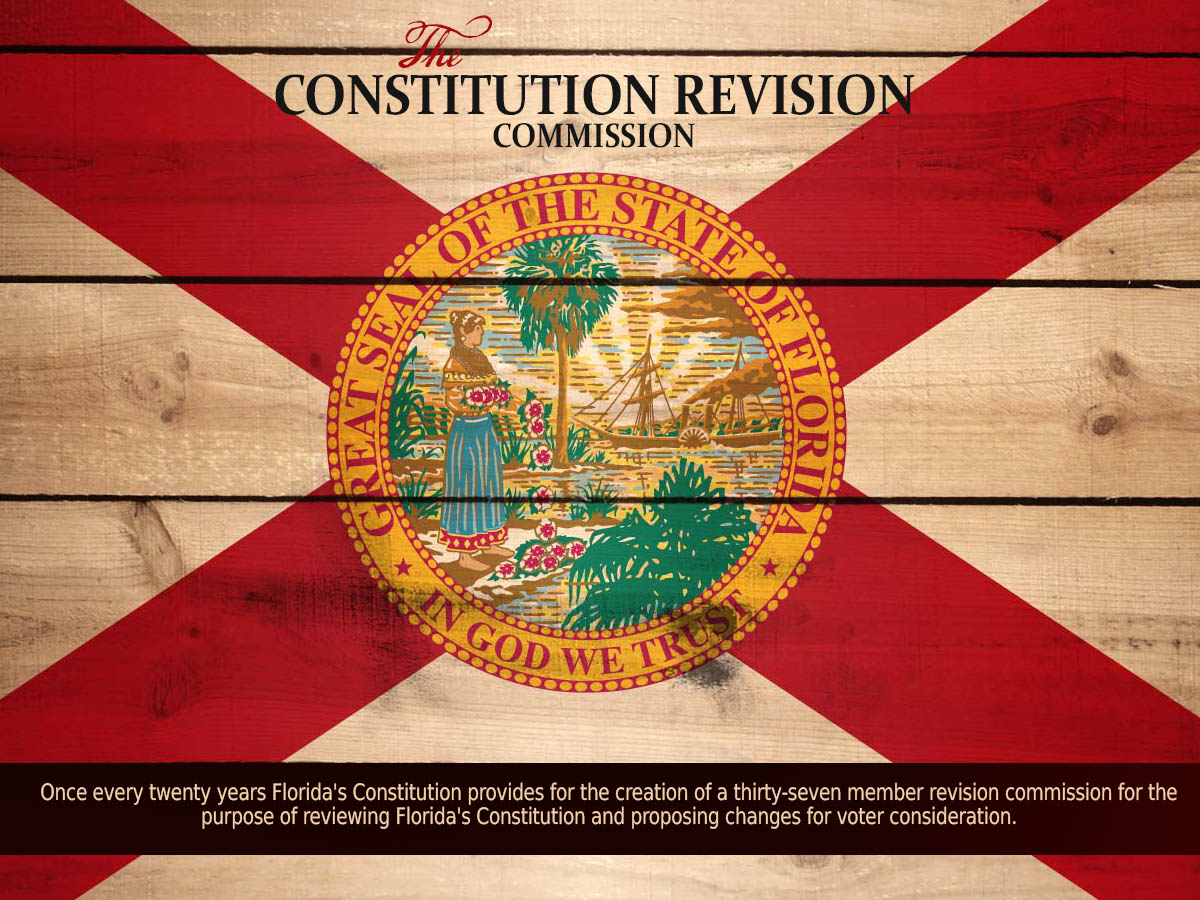 What many Florida voters may not realize is that the Commissioners are not elected members of a legislative body. Unlike the Florida Legislature, the Commission is not designed to resolve long-standing, heavily debated complex issues. I think we can all agree these types of issues are not best dealt with by placing narrow and often confusing verbiage directly on the ballot. According to former Supreme Court Justice Kenneth Bell who serves alongside me on the Foundation of Associated Industries of Florida CRC Working Group, the purpose of a state constitution should be “limited to the core or fundamental law of the state, with more detailed measures left to statutory law,” as outlined in his “A Guide to Amending Florida’s Constitution.”

Unfortunately, the current CRC, made up of outstanding men and women, are having to do that very thing right now. They are dealing with heavy, complex issues that have been before the Legislature many times in some cases, without resolution. Some may think if the Florida Legislature cannot reach a decision on an issue the next step is inclusion in our state’s core document. That is often an incorrect assumption. Many issues have been around for years without resolution, even after intense debate and thorough research. Some issues are resolved eventually, but that is generally accomplished by duly elected officials who spend time to fully understand the complexities of issues while trying to avoid expected and unintended consequences of their actions.

One of the classic examples of how NOT to amend a state constitution occurred in 2002 when a proposed constitutional amendment was added directly to the ballot via citizen initiative to prevent the caging of pregnant pigs. Yes, you read that correctly. Encased in our most precious document is language dealing with pregnant pigs. An issue perhaps worthy of a debate in the legislative circle, but not in the state constitution. Due to this approved constitutional amendment, there was nationwide discussion that Florida was “the next California” where government by referendum could make the state all but ungovernable.

I don’t see that it has reached that point, but there are clearly signs it could be heading in that direction.

Would a similar measure belong in the United States Constitution? The U.S. Constitution is a document that has lasted over two centuries, remains focused on ensuring government does not intrude upon the constitutional rights of citizens, and offers a clear and concise description of how national government should be structured. Shouldn’t the purpose of the state instrument be similar in nature and composition? The U.S. Constitution has just 8,770 words; whereas, the Florida Constitution has more than 44,000 words. What does that tell you? Let’s look closely at some of the past and current proposals and consider their validity for inclusion.

In addition to the aforementioned pregnant pig debacle, another prominent amendment was the high-speed rail mandate. Passed by voters in 2000, this amendment decreed a high-speed rail be built in Florida. Just two years later, that amendment had to be repealed by the same electorate that had originally passed it. Why? Because it was shortsighted and failed to address key questions, such as how it would be financed or the fluidity of the technology of current transportation.  There are several ideas currently being discussed by the CRC that fall in that category.

Current CRC Proposal 88, regarding a “Declaration of Rights” for nursing home patients would add substantial additional rights for a single class of citizens, over and beyond what all citizens should expect. Additionally, it would open a Pandora’s box of lawsuit claims. It could be argued, why not include “special” rights for children, the mentally handicapped, veterans, the homeless, etc.? Where does it end?

Another current CRC proposal is E-Verify – a federal citizenship verification technology not yet fully worked out or implemented.  hould our state constitution mandate Florida businesses provide what is essentially a federal government function in verifying the naturalization and immigration status of every employee and job applicant? Moreover, rapid advances in technology may soon make E-Verify technology archaic and obsolete. These problems are very similar to the high-speed rail amendment that was repealed.

Alternatively, there are several suitable amendments to the constitution that are being considered. One such amendment, CRC Proposal 97 establishes that the required 60% approval rate needed to pass an amendment would be based on actual turnout, not just those voters that voted on the amendment.

Another current issue that makes sense for inclusion in the constitution is this year’s proposal dealing with the Power to Tax. Submitted by the Florida Legislature, this joint resolution would require a two-thirds vote of the Florida Legislature to increase state taxes or fees. The Power to Tax and how to apply or impose those taxes is an essential element in any constitution, just like the power that is appropriate to address the general welfare of the citizenry.

While these are just some examples of past and present proposals, we encourage voters to evaluate whether each item on the ballot is an issue better suited for more thorough debate and study in the Legislature or whether it meets the restrictive criteria to be written into a constitution. If you support an idea but it’s not one that belongs in Florida’s constitution, but rather in statutes, we urge you to contact your local legislators and tell them you support the idea, but not the inclusion of it in our state constitution.

Dr. Ed Moore is the president of the Independent Colleges and Universities of Florida and is member of the Foundation of Associated Industries of Florida’s Constitution Revision Commission Working Group who recently released a brief on “What Belongs in a State Constitution.”