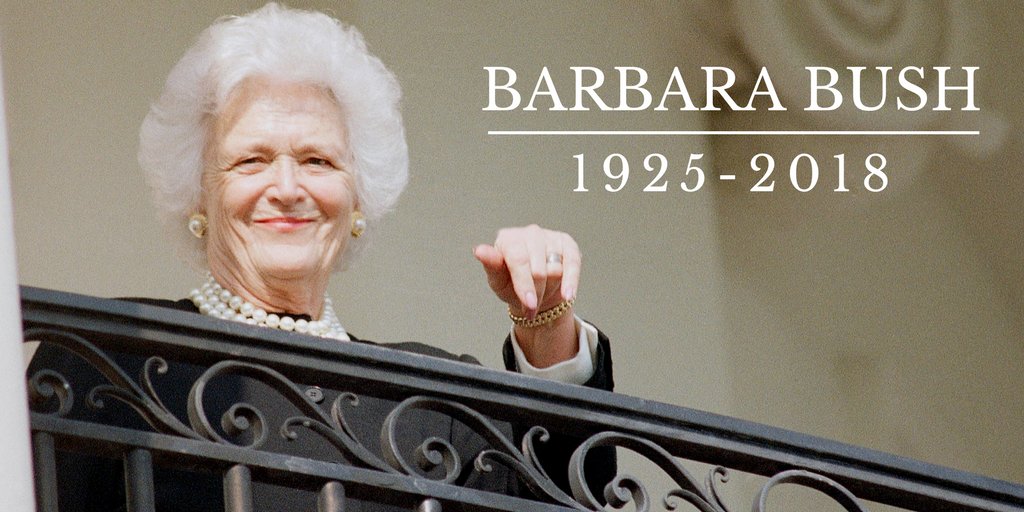 Former U.S. first lady Barbara Bush, the only woman to see her husband and son sworn in as U.S. president, died on Tuesday, the Bush family said. She was 92.

Bush was the wife of the 41st president, George H.W. Bush, and mother of the 43rd, George W. Bush.

Here is a compilation of reactions from the nation and Florida’s elected officials and politicians:

“It is with sadness that we add our voice to that of the many Americans expressing their admiration, love and support for Barbara Bush as we acknowledge her passing this evening. The former First Lady will always be remembered for bringing strength and dignity to the White House, the Presidency and America. She supported the 41st President as a wife and the 43rd President as a mother at times of critical change for our nation. Because of Mrs. Bush’s dynamic personality and devotion to her family, she will serve as an inspiration for future generations of Americans to come. Barbara Bush always approached her responsibilities with great integrity, and will also be remembered for her humility and understanding of the challenges of everyday Americans. On behalf of all of us, we pray for her and her family at this sad time.”

“Columba and I join every member of the Bush family in offering our sincere gratitude for the outpouring of love and support for my Mom in recent days, and throughout her remarkable life. I’m exceptionally privileged to be the son of George Bush and the exceptionally gracious, gregarious, fun, funny, loving, tough, smart, graceful woman who was the force of nature known as Barbara Bush. Thank you for your prayers, and we look forward to celebrating and honoring her life and contributions to our family and great nation in the coming days.”

I think my Ganny would have wanted us to remember her by picking up a book and reading to our child, grandchild, or finding an opinion different then our own. I love her and miss her very much.

She did it her way – with grace and class. pic.twitter.com/mTAVfOVXlp

“Barbara Bush was a remarkable woman and terrific first lady. We are all saddened by the news of her passing.”

“Our nation mourns the passing of former First Lady Barbara Bush. She was a great woman, whose commitment to God and country inspired all Americans. Her legacy will live on through her family. Jeanette and I are keeping the Bush family in our prayers.”

“Our hearts are heavy to hear about the passing of First Lady Barbara Bush. She was an incredible First Lady, wife, mother, grandmother, and role model for all Americans. Sending our love, thoughts, and prayers to the Bush family during this time.”

“Heartbroken to learn of the passing of Barbara Bush. She was an American original and a fierce advocate for literacy. Many prayers are with my friends in the Bush family.”

“Incredibly saddened to hear about the passing of Barbara Bush. She was an amazing First Lady and role model to so many. My heart is with @GeorgeHWBush, @JebBush, and their entire family.”

“First Lady Barbara Bush was a force to be reckoned with. A selfless servant to our country and a champion for literacy. May the heavens lift her up and give her wings. Melissa and I extend our deepest condolences to the entire Bush family.”

“May God bless the Bush Family.”

“Sad to say goodbye to a wonderful woman and role model: #BarbaraBush. Condolences to my friends @JebBush @JebBushJr @georgepbush and the entire Bush Family. My family, our community, and the country mourns your loss and celebrates a beautiful life.”

“Barbara Bush was a great American. She had a profound effect on so many Americans and always exemplified class and grace. RIP. Casey and I send our thoughts and prayers to the 41st President and the rest of the Bush family.”

“I am heartbroken to hear of the passing of former First Lady Barbara Pierce Bush. She was the matriarch of an upstanding, patriotic family, shaping her children into honorable men and women, two of which who would later serve our country as President and Governor. During her time in the White House, she focused on literacy initiatives, declaring that it was the ‘most important issue.’ Her innate propensity for kindness and passion to help others will continue to live on through her foundation, the Barbara Bush Foundation for Family Literacy.  I offer my deep condolences to former President George H.W. Bush, their children, grandchildren, and great grandchildren. Barbara Pierce Bush’s legacy is a blessing to our country.”

“Former First Lady Barbara Bush said the most important things in life were faith, family, and friends. She embodied all that and more. She was smart, tough, sincerely patriotic, a wonderful mother, and always the classiest person in the room. Our faith renews us and reassures us that she will live on in the hearts of all who knew her and that we will all meet again on the other side of this mortal life. May she rest in peace.”

“Very sad to hear that Barbara Bush passed away. My condolences go out to the entire Bush family. You are all in my thoughts and prayers at this difficult time.”

“Barbara Bush made our country a better place. She touched countless lives, and always graced us with dignity and civility. My thoughts and prayers are with the Bush family, during this time of great sadness.”

“I’m deeply saddened by the passing of First Lady Barbara Bush, and amazed by the life she lived. She was loving, wise, and strong; a woman of tremendous character and grace; and the rock of the Bush family. My thoughts are with her family tonight.”

“Very sad to hear of First Lady Barbara Bush’s passing. She was a woman of great strength who dedicated countless hours of her own life improving the lives of others, and our nation is a better place because of her. Praying for the Bush family during this difficult time.”

“An unabashed patriot and public servant, Barbara Bush was a smart and strong First Lady. She fiercely defended family and friends, and was a great advocate for literacy. My condolences go out to her entire family.”

“Barbara Bush’s contributions to our nation will never be forgotten. From the family that she raised to her work with child literacy, the world is truly a better place because of her. Tonight, my family and I pray for the Bush family as they mourn.”

“I’m saddened by the passing of Barbara Bush. She was an amazing matriarch and is an American icon.”

“Abby & I are incredibly sad to hear about the passing of Barbara Bush. She was a role model, an inspiration, an enforcer, a proud American, and most importantly a wonderful wife, mother, & grandmother. Our hearts & prayers are with Gov @JebBush & the entire Bush family.”

“Reflecting on an incredible American life. Barbara Bush set so many standards for us to follow. Fierce, unconditional and warm love of her family, class with candor, sense of self, understanding of the blessings and responsibilities of citizenship. A beautiful American life.”

“Saddened to hear of the passing of First Lady Barbara Bush. She was a strong and graceful woman who improved the lives of so many Americans. My prayers are with the Bush family in this difficult time.”

“First Lady Barbara Bush had class and integrity. She was a wonderful role model for all who followed. She will be missed. I pray for peace and comfort for @JebBush and the family.”

“Barbara Bush was admired across the country for her kindness, spirit and strength. She was a tremendous mother and First Lady, and we will always honor her legacy.”

“Barbara Bush exemplified what we should aspire to be like as Americans. She was graceful, yet never lost her common touch, sharp, but never boastful, and deeply committed to her family and her Country. America lost one of its greatest daughters tonight. Mrs. Bush- thank you. RIP.”

“We’ve lost an honorable public servant & a voice for civility that is dearly needed in times like these. The country’s hearts are with her family & loved ones tonight.”

“Wife. Mother. First lady. Advocate for children. Our country benefited from Barbara Bush’s service. May she rest in peace.”

“Barbara Bush was a voice of class and character who loved her country with as much heart and dedication as she did her own family. She will be sorely missed, but forever remembered. My thoughts and prayers today are with the Bush family and their loved ones.”

The nation mourns as one tonight. Barbara Bush’s memory will live on through her legacy of service for generations to come.”

“May we all quietly reflect on the life of the former First Lady Barbara Bush and how her grace, strength and values impacted all of us for the better. May she Rest In Peace and may her family celebrate the joy that she brought into their lives.”

“We are heartbroken by the news of former First Lady Barbara Bush’s passing,” said Chairwoman McDaniel. “Barbara Bush was known for her immeasurable kindness and generosity as First Lady, mother, wife, grandmother, and great-grandmother. An entire nation loved her and admired her unfailing faith. Barbara Bush’s memory lives on through the love of her family. We at the RNC are praying for peace and blessings for the entire Bush family.”

The Republican Party of Florida:

“We will lift the Bush family up in prayer during this difficult time. First Lady Barbara Bush was a remarkable woman who left an indelible mark on our country. She will be greatly missed.”

previousSunburn - The morning read of what's hot in Florida politics - 4.18.18