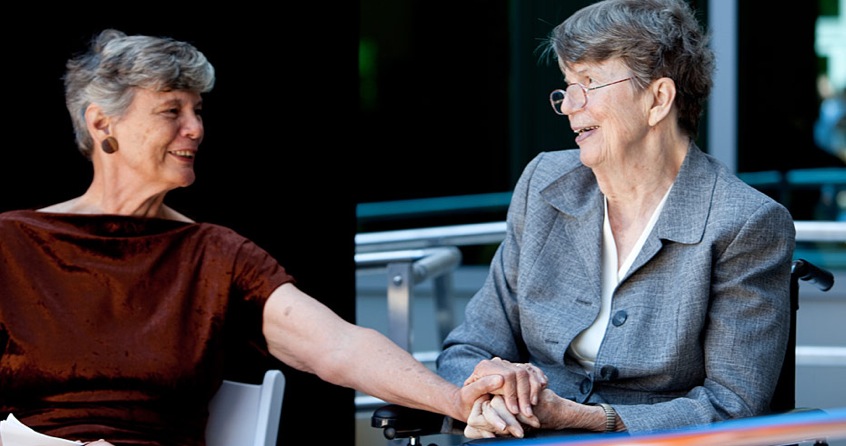 Maggy Hurchalla and her sister, the late Janet Reno. 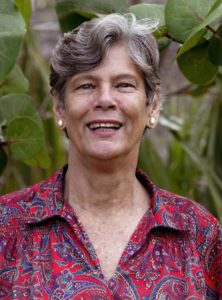 The slappee is a 77-year-old grandmother, a prominent Florida environmentalist, a sister of the late Janet Reno. Now, after expressing her rights of free speech in opposing a land development, Maggy Hurchalla is on the hook for $4,391,708 in a court-ordered judgment.

She doesn’t have it. She drives a 2004 Toyota Corolla with 207,000 miles on the odometer. “They can do whatever they want, but I’m not going away,” Hurchalla said. “If you can’t complain and moan in a democracy, what’s the point of having a democracy?”

The slapper is the scion of a family of multibillionaires, a developer who reshaped a proposed polo community into a dusty rock pit, a fellow with a penchant for litigation and also a criminal record.

George Lindemann Jr., heir to a cellphone, natural gas and broadcasting fortune, once spent 33 months in jail for hiring a hit man to electrocute a show horse named Charisma for $250,000 in insurance loot.

Disputes, court cases and regulatory actions have been detonating for ten years over Lindemann’s 2,200-acre “Lake Point” project in far-western Martin County, near Lake Okeechobee. Hurchalla, a Stuart resident and former county commissioner, has been one of the project’s most active critics, opposing it on environmental and other grounds.

Now, the latest and perhaps most weighty chapter of this tangled, acrimonious legal saga involves what Hurchalla, her attorneys and many outside experts call a patently obvious “SLAPP” suit filed in 2013 against Hurchalla by attorneys for Lindemann’s Lake Point project.

SLAPP stands for Strategic Lawsuit Against Public Participation. Banned by law in many states but only moderately restrained by Florida law, SLAPP suits are just as self-described.

They’re intended to chill public expression, public discourse and public participation in controversial issues. They’re intended to strip away fundamental First Amendment rights to engage in free speech and — as the U.S. Constitution sanctifies — “to petition the government for a redress of grievances.”

Put another way, SLAPP suits are nuisance suits on steroids — intended to harass and burden with thick, unremitting legal filings and perpetually rising legal costs people who criticize or otherwise oppose consumer products, government agencies or, as in this case, business executives or their projects.

“The point of this is simply to frighten anyone else from ever — ever — saying anything about them again,” said Hurchalla, whose late sister was the second-longest serving U.S. Attorney General in history.

Generally, SLAPP suits are not about money, but rather about achieving silence. “Generally” is the key word in that sentence.

The suit at issue here includes a financial component — that $4,391,708 judgment (plus court costs that could add another $1 million) imposed this past February by a six-member jury after an eight-day trial.

That trial and many other elements of the case were overseen by Circuit Judge William Roby, who seems enduringly hostile to Hurchalla and curiously friendly to her opponents.

In March, Lake Point lawyers obtained from Roby orders to freeze and garnish Hurchalla’s bank and other accounts. The orders also require her to produce countless tax returns, bank statements and many other personal documents. Interestingly and rather uniquely, similar orders were filed against her defense attorneys.

In what they call one of the more egregious incidents involving Roby, Hurchalla and her attorneys say they were summoned into a meeting with him after just one day of testimony in her trial and before her side presented any testimony at all. They say he told her that she likely would lose and that she should sign a letter he presented to her — a letter in which she would apologize for her previous comments about Lake Point and promise not to criticize it in the future.

She refused, and her lawyers say the offer revealed her opponents’ true motivation. “The judge sought resolution, not by suggesting any monetary payment, but through an agreement for steps that would intrude on Mrs. Hurchalla’s rights to free discussion of public issues, past and future,” they wrote in an appeal.

Her legal team is trying to get Roby removed from the case, demanding — among other things — a new trial before a different judge.

“What it comes down to,” Hurchalla said, “is that I criticized a rock pit operation owned by the son of a billionaire and was convicted in a SLAPP suit on which we are now engaging in a very important First Amendment fight.

“These lawsuits are meant not just to harass and intimidate and get you to give up, but also to make everyone else say, ‘I’m not going to be in that situation,’” she said. “It’s meant to kill free speech, and it’s being used more and more around the country.”

In recent weeks, outraged by Judge Roby’s persistent refusal to recognize Hurchalla’s First Amendment rights and by his other rulings and actions, some of Florida’s foremost legal minds have joined Hurchalla’s legal team.

These include Talbot “Sandy” D’Alemberte of Tallahassee, a former president of the American Bar Association and former president of Florida State University, and Richard Ovelmen of Miami, one of the nation’s most prominent First Amendment lawyers. They are working without fee.

“Honestly, so much has been done wrong here,” D’Alemberte said. “I’ve been practicing law since 1962, and I’ve never seen anything quite like it. If we can’t win this case, I should be disbarred.”

Also taking interest in the case are some of the nation’s leading First Amendment defenders. “I believe the actions taken by Lake Point against Maggy and the threats against Nat are over the top,” said Barbara Petersen, president of the First Amendment Foundation in Tallahassee.

Nat is Nathaniel Reed, 84, another leading Florida environmentalist, a former assistant U.S. secretary of the interior and a director of the Everglades Foundation. Lake Point attorney Ethan Loeb of Tampa also went after him, trying to compel Reed by written notice to alter previous testimony in a deposition or retract statements that tended to support Hurchalla and express opposition to the rock pit project.

Loeb allegedly did this without notifying Hurchalla’s attorneys, even though Reed was listed as a witness in the case. In response, Hurchalla’s defense team is seeking professional sanctions against Lindemann’s defense team, claiming attempted witness tampering and harassment.

Meanwhile, Reed told Lake Point’s team, in effect, to go out to that mining pit and … pound rock.

“In closing,” Reed wrote in response to Loeb’s demand, “let me just say that I take your letter as a threat against me personally and as your attempt, as a member of the Bar, to try to intimidate me to change my testimony. I find your actions unprofessional.”

As one can see, the case at issue here is complex, with many branches and side cases. Over the last decade, it has generated scores, maybe hundreds, of filings, motions, countermotions, subpoenas, rulings, depositions and appeals — and very many billable hours for Loeb and Lake Point’s other attorneys.

In a nutshell, here’s the background:

Lindemann paid $47.7 million in 2008 for the land he was to call Lake Point. The property was designated as a polo community, but when the Great Recession and housing crash exploded a few months later, he repurposed the project into a mining operation.

Hurchalla, Reed and others eventually came to oppose the project, on environmental and other grounds. Among other things, Lake Point proposed to store publicly owned water in the rock pit’s empty holes and then sell the public’s water back to … the public.

Hurchalla spoke openly and lobbied privately against it. At first, she and other opponents gained traction, with both Martin County and the South Florida Water Management District (SFWMD) opposing Lake Point’s plan.

Then, Lake Point brought in the heavy legal artillery from Tampa. By last year, both Martin County and the SFWMD found reason to reverse course, approve the rock pit operation and sign settlements. The mine currently is producing road rock and other products.

The pivotal Aug. 23 closed-door meeting in which the SFWMD agreed to settle the case remains under wraps. When about 20 members of the public asked the public agency to provide a public record of a matter of public interest, the district claimed it was being harassed and threatened to issue subpoenas and take legal action against them. Judge Roby ruled against the environmentalists in that one, too.

This also has aroused defenders of free speech and open government.

“I believe the action taken by the SFWMD is dangerously chilling…,” said Petersen of the First Amendment Foundation. “Do I need to worry each time I make a public records request that the custodial agency will haul me into court?”

That battlefront remains active, as does the battlefront involving Hurchalla, who got slapped big-time with that lawsuit five years ago.

In their court documents, Lake Point’s lawyers deny that they are engaged in a SLAPP action. Instead, they say, the case really is about her alleged “tortious interference” in a contract between Lake Point, the county and the water district.

They’re really big fans of free speech, Lake Point’s lawyers said, and they would never bury an opponent under reams of legal actions in a vindictive attempt to harass and silence that opponent. They said this in a 593-page court filing that weighed 6 pounds.

“Free speech, however, has limits,” they wrote in that filing. “Nobody — not even Maggy Hurchalla — has the right to lie to government officials in order to cause harm to third parties without certain consequences.”

Nonsense, says D’Alemberte, the rest of the defense team and Hurchalla. No one on their side is lying about anything, they said.

“This is a matter of principle,” Hurchalla said. “If I back down to a billionaire bully, no one will ever be able to walk up to a podium in a public meeting or send an email to a public official or speak to a commissioner again.

“I have two grandchildren who tell me they’re very proud of me. There is nothing in the world like having your tall grandson come home from college and hug you and tell you that he’s proud of you for not giving in or giving up.” 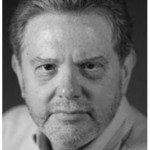 Martin Merzer is a former senior writer for the Miami Herald, who maintains a special interest in First Amendment and environmental issues.