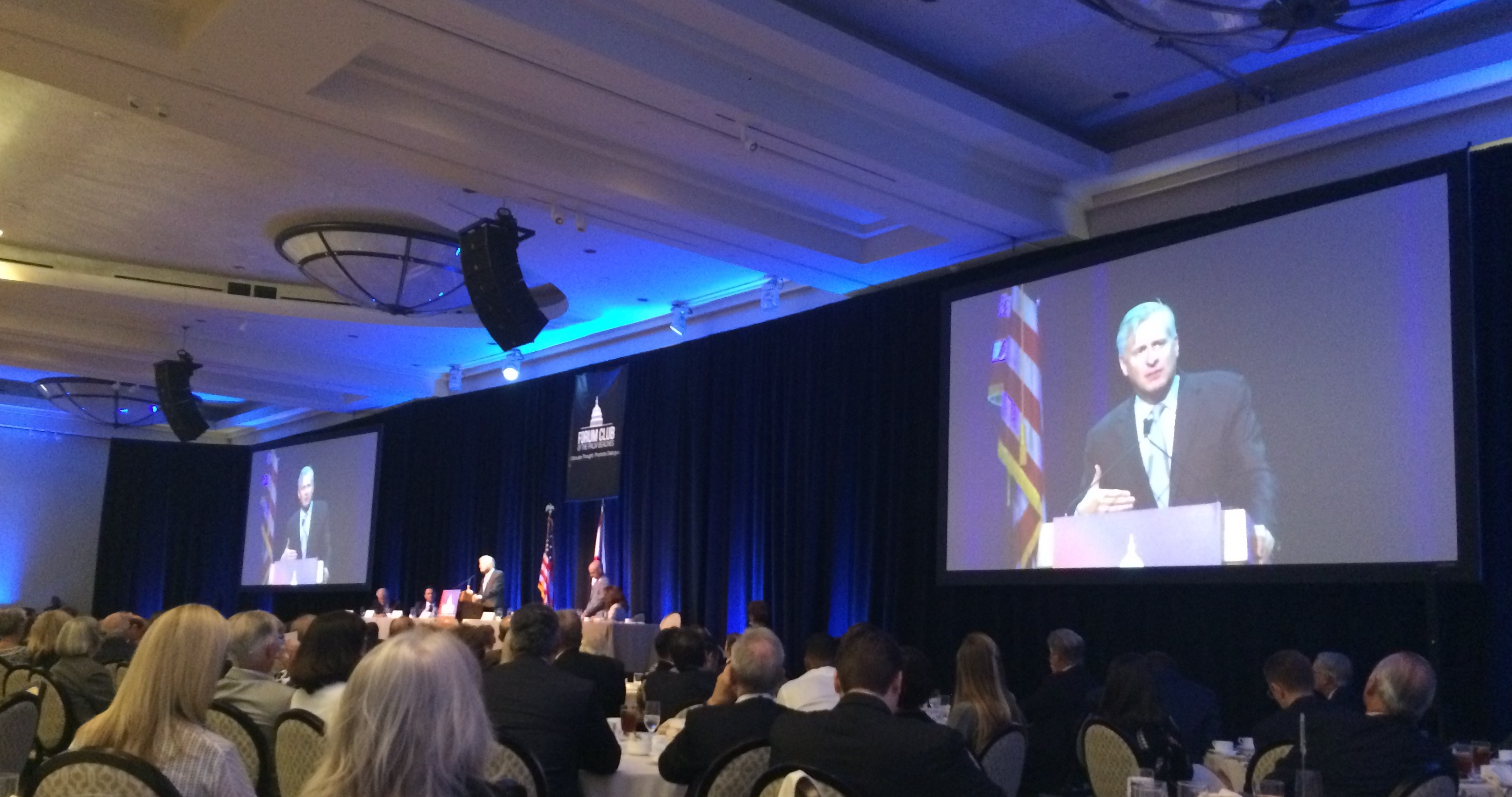 Listening to historian Jon Meacham speak to the Forum Club of Palm Beaches Tuesday, you’d be forgiven for forgetting one of the biggest political rallying cries of the past few years: “This is not normal.”

Instead, Meacham says, we’ve been here before.

He would know. Meacham’s newest book, “The Soul of America: The Battle for Our Better Angels” covers past episodes where Americans overcame periods of seemingly intractable divisiveness.

America is certainly divided right now, at least politically. The Pew Research Center has measured political polarization since 1994, and their most recent numbers show the sharpest division ever between Republicans and Democrats.

“It’s not a great moment if you are measuring overall social happiness in the United States,” said Meacham Tuesday. “Tribalism is the great problem of the age.”

Though ultimately hopeful, Meacham says tribalism is something Americans need to try to get past in order to solve the biggest problems of the day.

However, Meacham’s outlook was ultimately positive, saying later in the speech, “I have nothing but confidence in the broad future of the country.”

That positivity comes at least in part from previous episodes highlighted by Meacham where Americans overcame, at least temporarily, some of the major issues concerning people today.

Meacham first pointed to the 1920s, where the Ku Klux Klan experienced a sort of rebirth, driven at least in part by anxiety about immigration.

“50,000 Klansmen marched down Pennsylvania Avenue in 1925 without their masks on. It was very much an open thing.” Many people likened last year’s rally in Charlottesville to these sorts of open displays of hatred.

But Meacham credits our major institutions for beating back the rise of the Klan. He says the press did its job uncovering the group’s atrocities, and noted the courts upheld laws designed to weaken the Klan’s influence.

Then, the early 1950s saw the rise of McCarthyism in the fight against communism. Taking note of Senator Joseph McCarthy’s often wild and unprovable claims, Meacham said the press back then struggled with deciding “whether you simply reported what a person in power said, even if you had every reason to believe it was not true.”

Ultimately, the press turned a more critical eye toward McCarthy. Eventually he was discredited and censured by the Senate.

Meacham said there are similarities between McCarthy and President Donald Trump, who often says things later proven to be false, but says these comparisons aren’t driven by partisanship. “I would be saying exactly the same thing to you if a Democrat had been elected and a Democrat behaved the same way.”

This era of divisiveness isn’t isolated to debates about the president. Just last week, Florida saw widespread protests targeting Publix for donating to gubernatorial candidate Adam Putnam due to his support of the National Rifle Association.

Though Publix was not promoting the NRA directly, gun control activists were outraged about the company’s support of someone who did. That was enough for gun control activists, who have targeted the NRA for its resistance to certain gun control measures following the shooting at Stoneman Douglas High School in Parkland. Ultimately, Publix ceased all campaign donations.

Earlier in the month, the script was flipped when new NRA President Oliver North harshly criticized those activists, calling them “civil terrorists.”

Thought these types of flare-ups seem commonplace in 2018, Meacham says the defeat of the KKK and McCarthyism show that Americans can evolve past chaotic events and get back to periods of relative normalcy and working together. But he says it may take an effort from the population at large to make change.