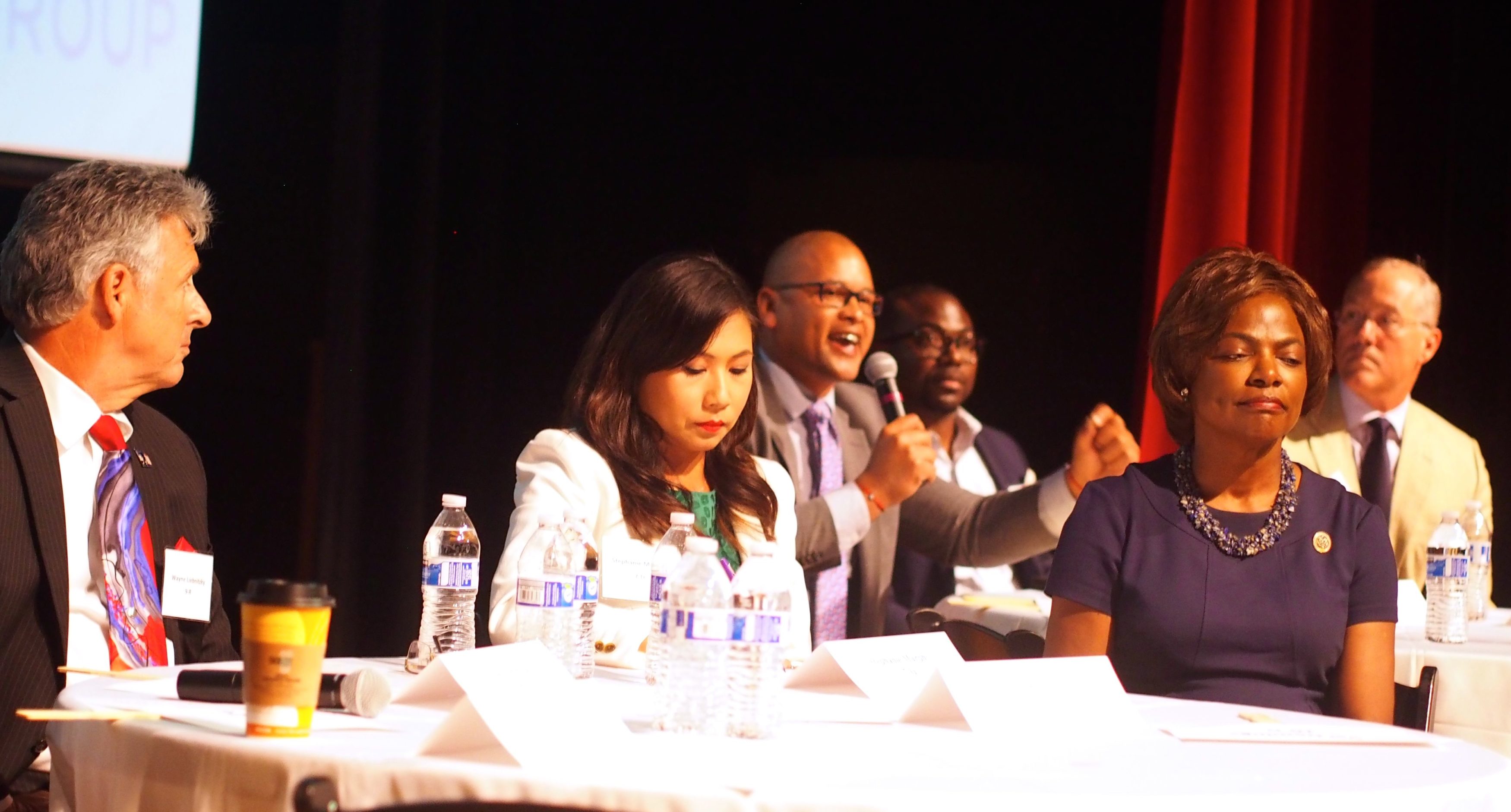 The result was mostly cordiality, with many of the sparks provided from candidates furthest on the left and right, Chardo Richardson and Wayne Liebnitzky.

Richardson sought to draw a direct line between himself and political compatriot Alexandria Ocasio-Cortez, who won a stunning Democratic primary in New York, and passionately stuck to hard-line progressive positions advocating single-payer health care, abolishment of the Immigration and Customs Enforcement agency, and gun control, while declaring a “human rights crisis” created by President Donald Trump‘s policies on immigration. And he stuck it to Congress.

“The only way we can fix Congress is to reform Congress,” he declared.

Liebnitzky spoke with more calm and consideration, as is his demeanor, but staunchly defended conservative positions on such things as immigration, health care, and a border wall, noting that the Cuban Mariel boatlift of 1980 demonstrated both that good people try to come and “there also are some bad cats who come here,” and the 2nd Amendment, even in the face of the Valentine’s Day massacre at Marjory Stoneman Douglas High School in Parkland.

“I think it was 19 times that individual down at Parkland was investigated,” Liebnitzky declared. “How many more laws do we need? What it was is a failure of the system.”

Conspicuous by their absences were two candidates who’ve been in the fiercest fights of the upcoming primaries: Democratic former U.S. Rep. Alan Grayson, whose trying to win back his CD 9 seat from Soto; and Republican Scott Sturgill, who has been in a bloody Republican primary battle for Miller in CD 7.

Also not appearing was the third Republican in the CD 7 primary, Vennia Francois.

As the questions rolled over guns, immigration, health care, partisan fighting, and other issues, the candidates pretty much lined up left to right with their answers: Richardson, Wade, Demings, Soto, Murphy, Miller, and Liebnitzky. Demings, Soto and Murphy touted their accomplishments in Congress, Miller touted his accomplishments in the Florida House of Representatives, and Richardson, Wade, and Liebnitzky offered hard-line oppositions.

At times those closest in the partisan divide, Murphy and Miller — potential opponents in the purple CD 7 — sounded in more agreement than they were with the candidates on the far wings of their parties, talking about the needs for bipartisan work and talk between partisan rivals. Murphy sounded as if she wanted to not be pulled toward Richardson on the left, while Miller sounded as if he didn’t want to be pulled toward Sturgill in the right during their primary battles, and instead, preparing to battle each other somewhere closer to the middle.

“I’m proud to say I’ve been named the most effective member of my freshman class as well as the seventh-most bipartisan member of Congress,” Murphy stated.

She stood her ground on key Democratic positions and Miller stood his ground on key Republican positions, such as the staunch defense of 2nd Amendment rights even to oppose bans on assault weapons, supporting a border wall of some sort, and working piece-by-piece on health care reform.

Yet Miller sought to stress his pragmatism in working on legislation, and that means working with Democrats. He even allowed: “I applaud Congresswoman Murphy for breaking through that.”

Miller likely hasn’t said anything like that about Sturgill for months.

He also spoke of fueling the American economy with the kind of growth seen in the last quarter to the point that the United States not only finds the revenue to heal its own problems but begins lifting the entire world economy.

Soto and Demings, however, leaned left a bit, but still made efforts to describe Congress as far more functional than it gets credit for being, and bipartisan efforts far more common.

Soto’s challenge from Grayson on the left is real and foreboding, perhaps more so than what he might be expecting from Liebnitzky, whom he defeated in the 2016 election. Soto spoke strongly about the need for immigration reform to include DACA renewal, comprehensive immigration reform, and the need for improvements to the Affordable Care Act, and especially for gun law reforms to include, at the very least, a banning of bump stocks. He also talked about the four bills and 42 amendments he said he got approved.

While Wade provided some of the most practical details of the night on such subjects as poverty levels in Central Florida and some of the most personal responses on things such as health care, he often appeared lost in the crowd of veteran politicians.

Demings responded as if she had no real competition, often offering her own fire as she railed against immigrants’ children in cages and getting guns “out of the hands of criminals and terrorists.”