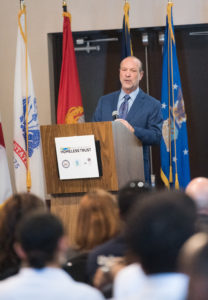 Miami-Dade County has become the latest community in the United States to effectively end the problem of veteran homelessness.

A ceremony Thursday commemorated the achievement, spearheaded by the Miami-Dade County Homeless Trust.

“After four long years of leaving no stone unturned, I am proud to officially announce that Miami-Dade County has effectively ended homelessness amongst veterans in our community,” said Ron Book, chair of the Trust.

According to data from the organization, the county identified 317 homeless veterans in 2014, 142 of which were unsheltered. By January of this year, that number of unsheltered veterans had been brought down to just nine, a reduction of nearly 94 percent.

“Since December 2014, together with our network of providers and partners, we have housed close to 600 homeless veterans and we prevented homelessness for hundreds more who were at risk,” Book said.

Today, unsheltered veterans represent less than one percent of the homeless population, according to the group’s most recent data.

The Trust was founded in 1993, and is led by a board of 27 volunteers. The trust works to advise the County Commission regarding the implementation of the Miami-Dade County Community Homeless Plan.

The Trust doesn’t provide services to the homeless population directly. Rather, it coordinates available funds and oversees compliance of agencies contracted by the county.

In 2014, the Trust increased its focus on the issue of veterans’ homelessness, after Miami-Dade County joined the U.S. Department of Veterans Affairs‘ 25 cities initiative. That initiative was designed to ramp up local efforts across the country to tackle this issue.

“This is a commitment from our community leaders that no one who has served our country should be forced to sleep on the streets,” said Book.

“We know we cannot say that no veteran will ever become homeless again. But we can say, and we can say with conviction, that we have a system in place now to make certain that veterans’ homelessness will be rare, it will be brief.”

Book also spoke of the county’s partnership with the U.S. Department of Housing and Urban Development (HUD), an agency led by Secretary Ben Carson that helps address housing issues at a federal level.

“We’ve never had, in 24 years, a stronger relationship with [HUD] than we have had under this administration. And 100 percent of that credit goes to the man that leads that agency.”

Secretary Carson was on hand to deliver remarks, congratulating Miami-Dade County on the importance of this work.

“Those who once wore our nation’s uniform deserve more than a life on the streets and we have no greater responsibility than to make certain they have a home they can call their own,” Carson said.

U.S. Rep. Mario Diaz-Balart, who represents Florida’s 25th Congressional District and chairs the House committee in charge of appropriating funds to HUD, was also on-hand to speak about the government’s efforts.

“Our veterans sacrificed so much to defend our freedom, and we owe it to these brave men and women to help them in their times of need,” Diaz-Balart said.

“As Chairman of the House Appropriations Committee on Transportation, Housing and Urban Development, I am grateful to be in a position to contribute towards this goal, and will continue to do my part to ensure we put an end to veteran homelessness across the country.”

“Today, we say with certainty that Miami-Dade is treating its veterans with the respect they deserve,” Gimenez said.

“Behind every number and percentage, there’s a person,” Book added. “It is about never giving up on people.”