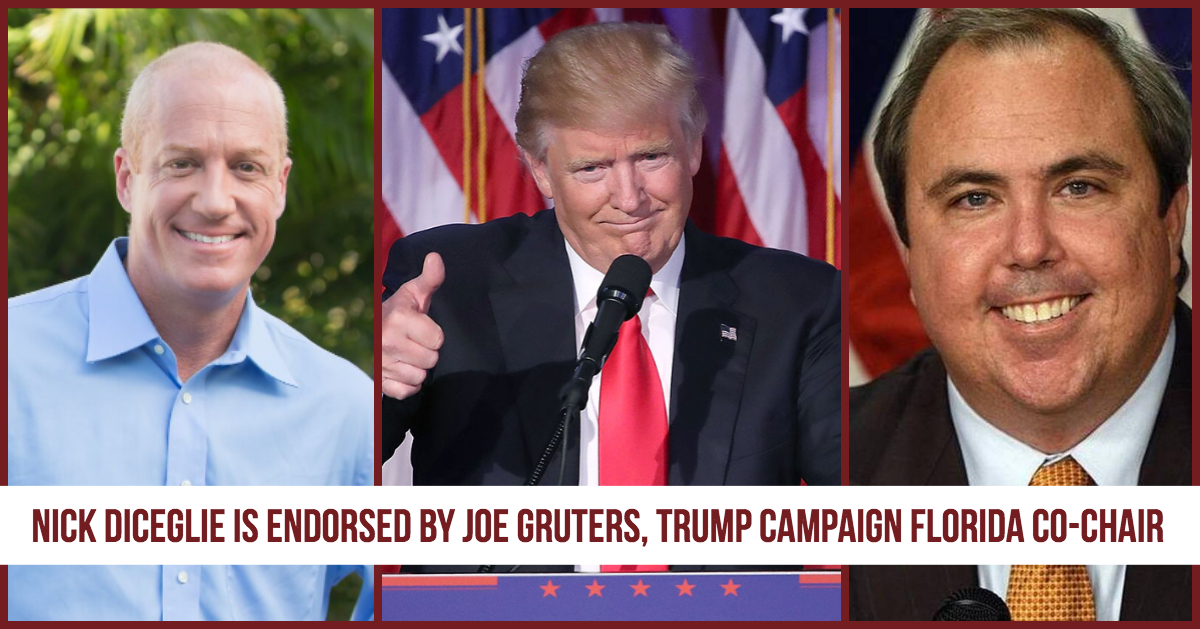 “As Chairman of the Pinellas County Republican Party, Nick worked tirelessly to increase Republican voter registration and improve a grassroots operation that helped turn Pinellas County from blue to red,” Gruters said. “His help was a critical part of helping Donald Trump win Florida in 2016. In fact, President Trump and his campaign had so much confidence in his support that they selected him to be one of Florida’s 29 members of the Electoral College, where he cast a vote for Donald Trump.”

While Gruters’ endorsement isn’t from “the big man himself,” it’s about as close as you could expect for a state House race and could carry some weight among HD 66 voters, who broke plus-14 for Trump two years ago.

“I am honored to have the endorsement of Representative Joe Gruters,” DiCeglie said. “He brings a tremendous energy to our party, which proved to pay dividends in the 2016 election. He too is an ardent supporter of our President and his leadership didn’t go unnoticed as Trump named him Florida Co-Chair of his campaign. Rep Gruters and I are like minded individuals who share the same agenda as our President and his support means a great deal.”

In addition to his leadership role in Pinellas County Republican politics, DiCeglie is the owner and operator of waste management company Solar Sanitation. That part of his resume got the spotlight in his first TV ad, where he said he outlined his plans to “clean things up in Tallahassee.”

DiCeglie and Jacques will go head-to-head in the Aug. 28 Republican primary for the open seat, currently held by term-limited Rep. Larry Ahern. The winner of that contest will face school teacher Alex Heeren, a Democrat, in the Nov. 6 general election.

Jacques, who is also on the airwaves and boasting fresh endorsements, has the advantage in the money race.

HD 66 is a coastal Pinellas seat covering part of Clearwater as well as Belleair Bluffs, Indian Rocks Beach, Indian Shores and Seminole. It is a safe Republican seat that has been held by Ahern since it was redrawn ahead of the 2012 elections.

previousEileen Higgins gets behind Jason Pizzo in SD 38