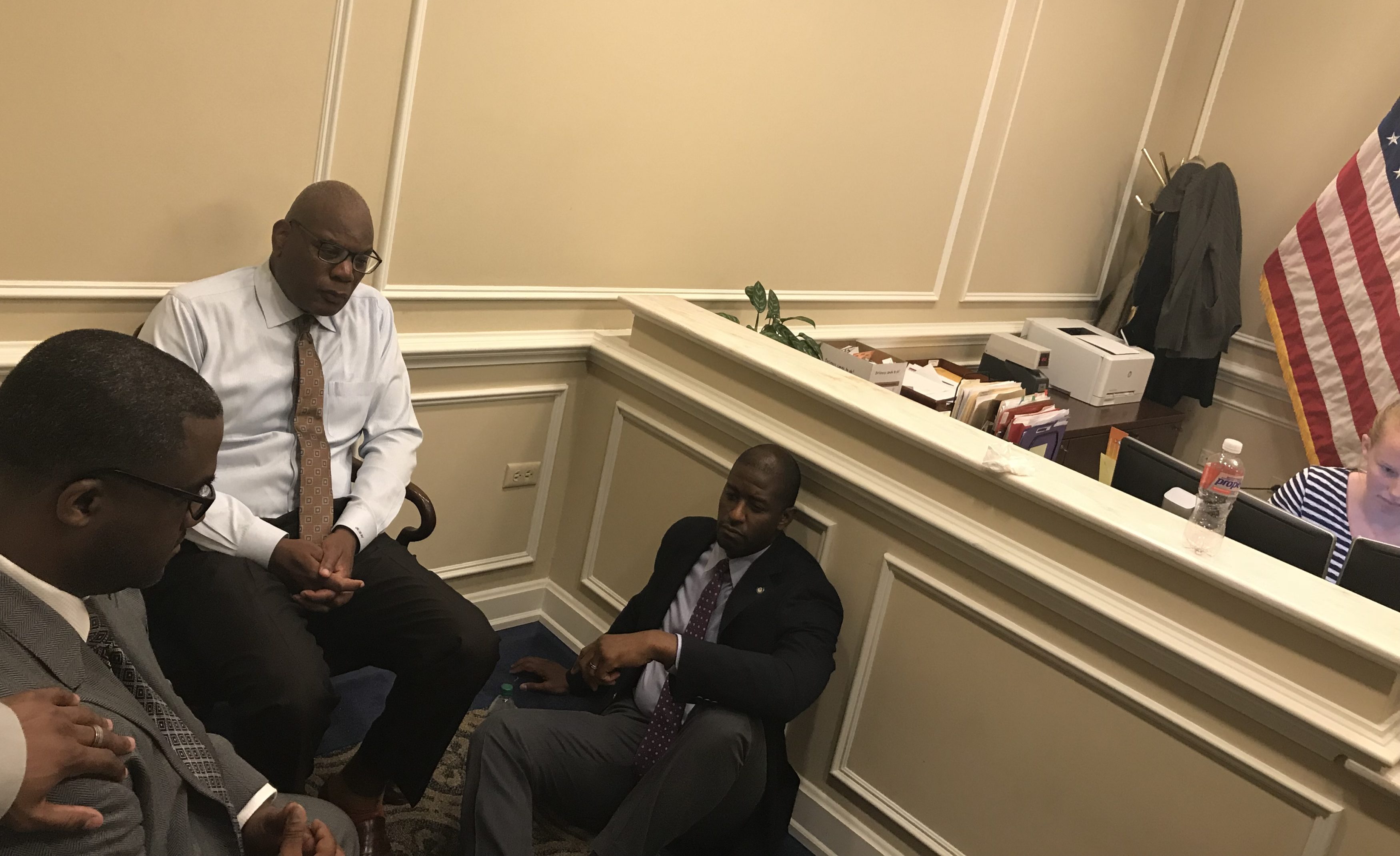 What began as an intimate protest at a church in Tallahassee over the state’s controversial ‘Stand Your Ground’ law turned into a small march to the capitol and a subsequent meeting between a senior member of Gov. Rick Scott’s staff and some of the state’s high profile critics of race relations and gun violence, including Democratic gubernatorial hopeful Andrew Gillum.

At Bethel Baptist Church, just blocks from the Capitol, Gillum, Congressman Al Lawson, local clergymen and Attorney Ben Crump criticized the state’s ‘Stand Your Ground’ law, charging, among other things, that the law is unjust and unfairly applied against minorities.

A staffer at the entrance informed the group that Scott is in Colombia. This was later confirmed by Scott’s spokesman.

In Scott’s absence, the group requested a representative from Scott’s staff. At one point, Holmes reminded the receptionist that he served as vice chair of the Governor’s Task Force on Citizen Safety and Protection, launched after the death of Trayvon Martin. Gillum, eager to meet with a member of Scott’s staff, called the Governor’s cell phone number, eventually speaking with an unnamed spokesman. No promises were made and as media left, Gillum and the clergymen sat in the entrance.

According to a news release that followed the Wednesday afternoon meeting, Gillum demanded that Scott contact the McGlockton family and Jacobs, consider declaring a State of Emergency over the ‘Stand Your Ground’ provision and convene a statewide clergy to “discuss the dangerous racial implications” of the controversial law.

The rally and march were some of a few to follow in the wake of the fatal shooting of Markeis McGlockton last month in Clearwater and local Sheriff Bob Gualtieri’s decision to not pursue charges because he believes the shooter acted within the boundaries of the state’s ‘Stand Your Ground’ self-defense law.

Joining the faith and government leaders at the church were members of the McGlockton family, as well as Britany Jacobs, McGlockton’s girlfriend. Together they had three young children.

In both cases, Crump charged, “if they just called the police, this never would’ve happened.” Much of the discussion at the church highlighted that Drejka is white and McGlockton is black.

“Can you imagine if the dynamics were reversed,” Crump asked rhetorically, “and there was a white woman sitting in her car with her two children and a black man like Markeis McGlockton came up to some stranger yelling, screaming and cursing at that white mother?

“And the white father came out to defend his family, to defend his property,” Crump continued, “And the black, strange man shot the father who was defending his family …  Does anybody believe the police would not have arrested him on the spot?

He added: That’s “if he had not been executed in that convenience store parking lot.”

Gillum, while at the church, renewed his call for Gov. Scott to declare a State of Emergency over the law, and reminded the audience that if he were elected to Governor, he’d suspend the law immediately.

The ‘Stand Your Ground’ provision “allows vigilantes under the cover of the law to become judge jury and executioner all in their own right,” charged Gillum.

Referencing the shooting of McGlockton, Gillum added, “No action taken on that day that should’ve resulted in a death penalty.”