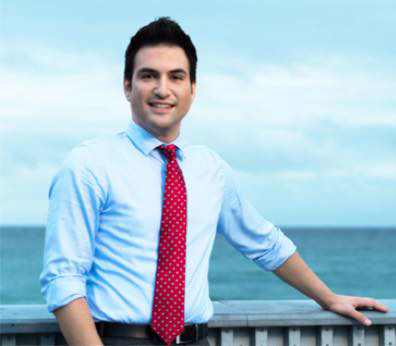 House District 89 candidate Matt Spritz is facing questions from his fellow Republicans after a previous quote surfaced in which Spritz essentially declared himself a “Never Trumper.”

The since-deleted Facebook comment from Spritz read, “Never said I was for [Donald] Trump. I’m not. Nor will I defend him.” 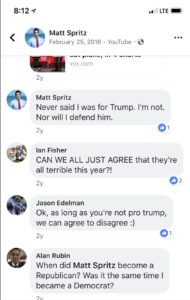 The comment has Spritz facing questions as the HD 89 Republican primary inches toward a close. Election Day for the primary will be held on Aug. 28.

Accountant Mike Caruso, who’s facing off against Spritz for the GOP nomination, released a statement on Facebook hammering Spritz for his comments. Caruso declared he “has been behind President Donald Trump since the beginning. No questions asked.”

But it’s not just his primary opponent criticizing Spritz on the Trump issue. Sue Snowden, who served as chair of the Trump campaign in Palm Beach County, said Spritz was a non-figure when it came to the 2016 campaign.

“I never saw or heard of Matt Spritz during the entire 15 months of my being the chair,” Snowden said. 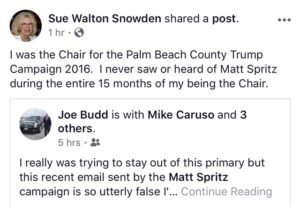 Snowden now serves as Treasurer of the Palm Beach County Trump Club. Her husband Larry is the group’s vice president.

Joe Budd, a founder of Trump Club 45 PBC, also had had harsh words for Spritz, calling a mailer from his campaign “so utterly false I’m not going to let it stand.” 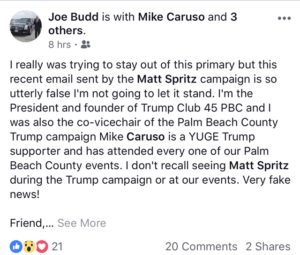 The issue could haunt Spritz when it comes to the primary.

While Trump’s overall approval numbers have been lackluster from the time he stepped into office, polls consistently show Trump with support among his party in the 80 to 90 percent range. And those numbers are typically at the higher end.

Should Spritz go on to win the nomination, his general election prospects could take a hit as well.

Republicans have only a slight plurality in voter registration in HD 89, according to the latest numbers released by the Florida Division of Elections. GOP voters edge out Democrats just 35.6 percent to 33.4 percent in the district. That means if a sizable share of Trump supporters decide to stay home, it could be a boon for the Democratic candidate.

In comments to Florida Politics, Spritz said this of Caruso’s criticism: “My opponent is taking a Facebook comment from three years ago completely out of context and trying to use it against our campaign because he’s losing and desperate.”

Spritz then pointed to his current support of Trump. His campaign’s Facebook page is full of messages framing him as the most pro-Trump candidate in the race.

“I’m ready to support President Trump’s agenda in the Florida House, but I need your help,” reads one post.

“We need more leaders in Tallahassee who will support our President,” says another, in which Spritz touts an endorsement from Joe Gruters, former co-chair of the Trump campaign.

Spritz has also latched onto issues Trump has promoted during his presidency, staking out a hardline position on immigration and criticizing Miami Dolphins players for kneeling during the national anthem.

Spritz contended his past comments were a “non-story.” He also pointed to a $1,000 donation Caruso received from the Herb Law Firm and another $250 donation from James Herb.

That’s the same James Herb who is suing to have President Trump declared incompetent.

“Anyone who actually supports our President would never, in a million years, have taken that check,” said Spritz. “But [Caruso] did.”