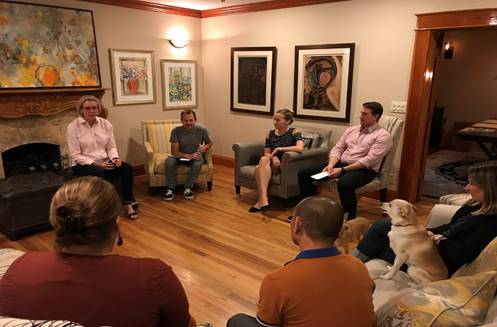 Former Tampa Police Chief Jane Castor is making her case to be the next mayor of Tampa one living room at a time.

“I have always said that Tampa’s greatest resource is our citizens, and I am doubling down on my commitment to include residents and all of our neighborhoods into our campaign by going to every neighborhood across the city to listen to what they think are the most pressing issues facing Tampa,” Castor said.

“As I create my platform, I want to know what our citizens’ vision for Tampa’s future is, because their voice is critical to everyone’s quality of life. This is an exciting time in Tampa’s history, and I’m even more excited to hear from our community about what the next chapter in our city’s story should look like,” she concluded.

“When Jane was Chief of Police, it was always clear that she led by example and that there was a big heart beating underneath the badge,” said William Truett. “Sitting with Jane, and being able to tell her about our concerns, shows she truly cares about every neighborhood in Tampa, not just mine.”

Dates and times for all future stops on the the neighborhood listening tour can be found on Castor’s campaign Facebook page.

Castor is one of the better funded of the nine announced candidates with nearly $159,000 in hard money fundraising and another $225,000 raised for her affiliated political committee, Tampa Strong.

Castor has $345,500 on hand between the two accounts, putting her behind only Straz, who has provided his campaign with self-funded $1.55 million in self-funding thus far and has already started rolling out ads for his campaign.

There are six months to go before the mayoral election is held on March 5, 2019. The new mayor and councilmembers will take office on April 1, 2019.