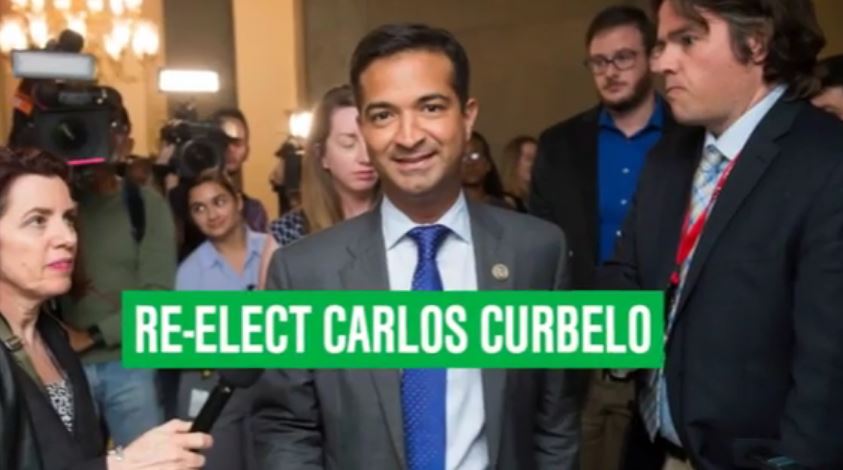 A pro-clean energy group is jumping in with a new ad campaign supporting Republican U.S. Rep. Carlos Curbelo in his bid for re-election.

Citizens for Responsible Energy Solutions (CRES) is a Washington, D.C.-based group which aims to support Republicans who push for clean energy policies in Congress.

The organization endorsed Curbelo back in June during the primary campaign. Now, it’s dropping $221,000 on a radio, digital, mail and phone ad buy supporting Curbelo against Democratic challenger Debbie Mucarsel-Powell.

“An independent voice for South Florida, Carlos Curbelo has championed comprehensive policies to make American energy independent by decreasing our dependence on foreign oil and increasing our production of natural gas, wind and solar,” the ad’s narrator says.

“Working across the aisle, Carlos has pursued common sense clean energy policies that grow our economy, create jobs here at home and preserve our climate. Carlos Curbelo: our champion for South Florida.”

While Democrats have generally pushed for more regulations to clean up the environment, Curbelo has at times broken with his party to do the same.

In July, he proposed a carbon tax bill, which would raise money by taxing emissions from coal and natural gas production. Republicans swiftly shot down the measure, even passing a resolution condemning any carbon tax plan.

Still, Curbelo has said he’s committed to his efforts on the environment.

“I’m proud of my work to break through the polarization and build bipartisan consensus on renewable energy development and new technologies,” Curbelo said in June, when CRES announced its endorsement.

“These efforts will directly address the threats climate change and sea level rise pose to our local and national environment.”

“Congressman Curbelo understands how important South Florida’s environment is to the local economy, which is why he’s been a tireless champion for creating jobs and preserving the area’s unique natural resources and climate,” Dozier said.

“In a tough political year, the Republican candidates who will be successful in Election Day are those willing to tackle the most important issues facing their home districts and the country. CRES is proud to stand behind Rep. Curbelo and his record of supporting clean energy and the economy in Florida’s 26th Congressional District.”

Dozier’s assessment may be correct. It certainly couldn’t hurt Curbelo to win over some more independent or left-leaning voters. Recent polling has shown a tight race in CD 26, and Mucarsel-Powell outraised Curbelo in the most recent fundraising period.

While some analysts still give Curbelo an edge, others say it’s a true toss-up.

You can watch the new ad from CRES below.