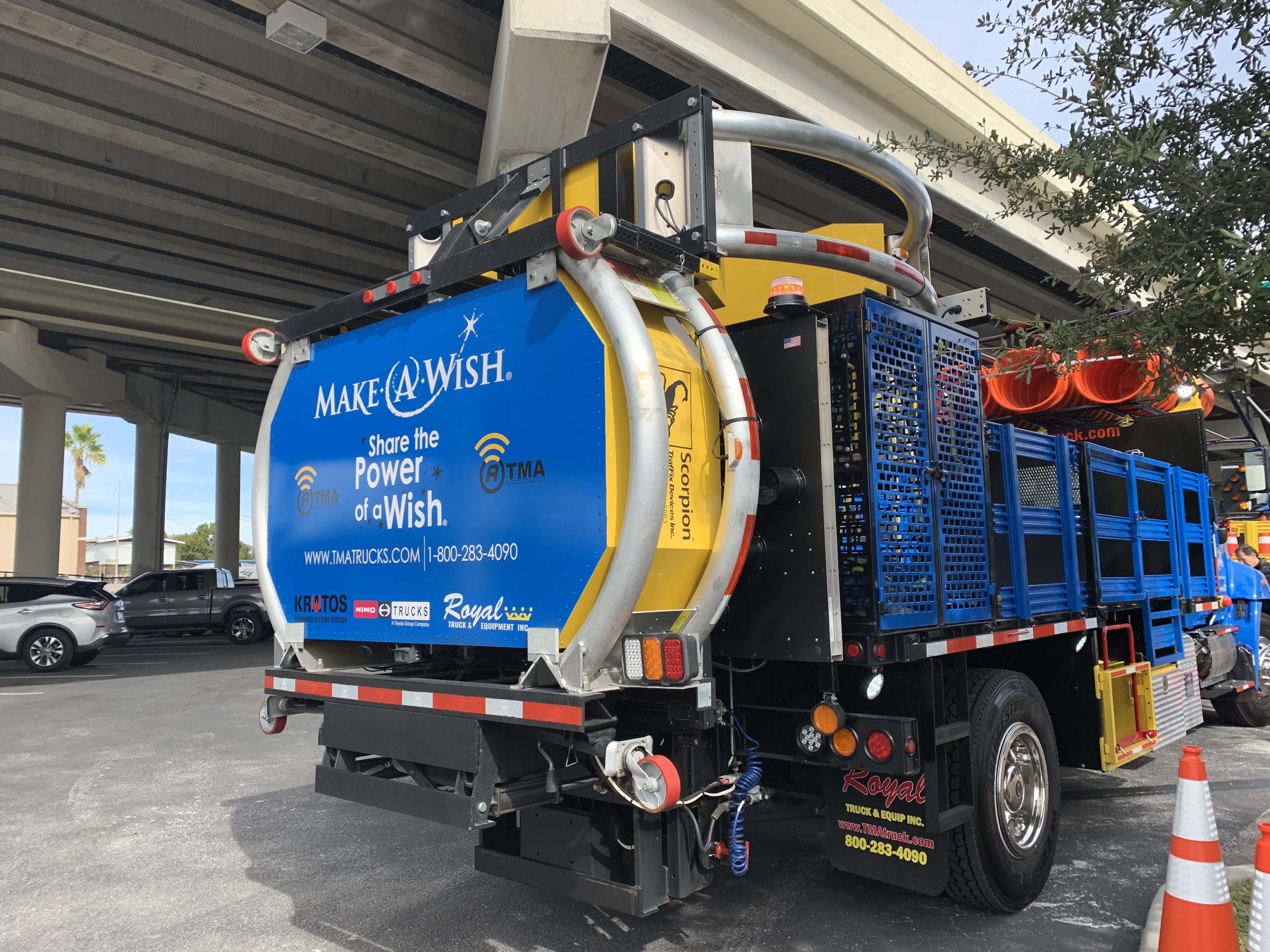 After his 2017 inauguration, the President of the United States climbed aboard a semi, honking its horn with all the joy of a six-year-old.

Pack that big truck full of super high-tech equipment that lets it drive all by itself and suddenly that mammoth of a vehicle becomes even cooler.

That’s what defense contracting company Kratos Defense and Security Solutions is doing, and their work is saving lives. Not yet clear is how many, but every year at least 500 people are killed while conducting work on roads and highways, as a result of oncoming vehicular traffic plowing into them.

Kratos is equipping attenuation trucks with autonomous vehicle technology to protect workers from getting hit by staging the unmanned vehicles behind work crews. The company showed off its live-saving tech creation at the 2018 Florida Automated Vehicle Summit in Tampa this week.

Attenuator trucks are built with shock-absorbing buffers on the back and around the vehicle. A driver follows work crews and waits in the truck as a barrier to protect against oncoming traffic. But that driver is basically a sitting duck as the vehicles’ sole purpose is precisely to wait to be hit.

“A truck got hit, and the driver was airlifted from the crash, but someone still had to get in that truck,” said Rob Roy, president of Royal Truck and Equipment, an attenuation truck manufacturer. “No one wanted to get back in that truck.”

Now they don’t necessarily have to.

Kratos retrofits the already hardened trucks with a series of radar, lidar, sensors and high-powered GPS technology to allow the truck to follow behind a manned “lead” vehicle without a driver operating it.

Lidar uses laser light pulses to detect objects, while radar uses radio waves. Combined, the two create a robust vision of what is surrounding the device sending out the respective lidar and radar signals.

The trucks use sensors to maintain a set distance behind the lead vehicle. Radar and lidar along with GPS coordinates that keep track of location within just inches keep the truck in its lane and detect potential road hazards.

The truck follows GPS “breadcrumbs” from the lead vehicle to maintain course. When the lead slows down, it slows down.

The truck is also equipped with a series of panic buttons, not surprisingly giant red buttons, to stop the truck in an emergency. The lead vehicle driver also has access to a kill switch.

The technology is not quite advanced enough to drive without its lead, but it’s not intended to.

The fully automated attenuator trucks are one of a growing number of examples that driverless technology is already here. The same technology used to allow the buffer trucks to follow manned vehicles to keep them safe is only a few tweaks away from being able to navigate roads and highways without a manned guide.

Kratos offered rides in the truck along a closed portion of the Lee Roy Selmon Expressway’s reverse express lanes near downtown Tampa. Passengers get a literal front row seat to a vehicle that, once properly programmed, took on a mind of its own.

Thumb inserts on the steering wheel allow the wheel to move freely without human intervention. Cables on the gas and brake pedals made it look like a ghost was in control as they depressed seemingly by magic.

The entire experience was not unlike sitting in the passenger seat of a normal truck. The engine roared just the same. The vehicle maintained course and sped up and slowed down accordingly. In perhaps an extra realistic twist, if you happen to ride during heavy braking, the truck does not brake nicely.

That’s also by design. If the truck needs to stop, it’s going to stop. And with no one riding in the cab, a hard stop isn’t a big deal.

previousContractors say Florida is the best environment for builders