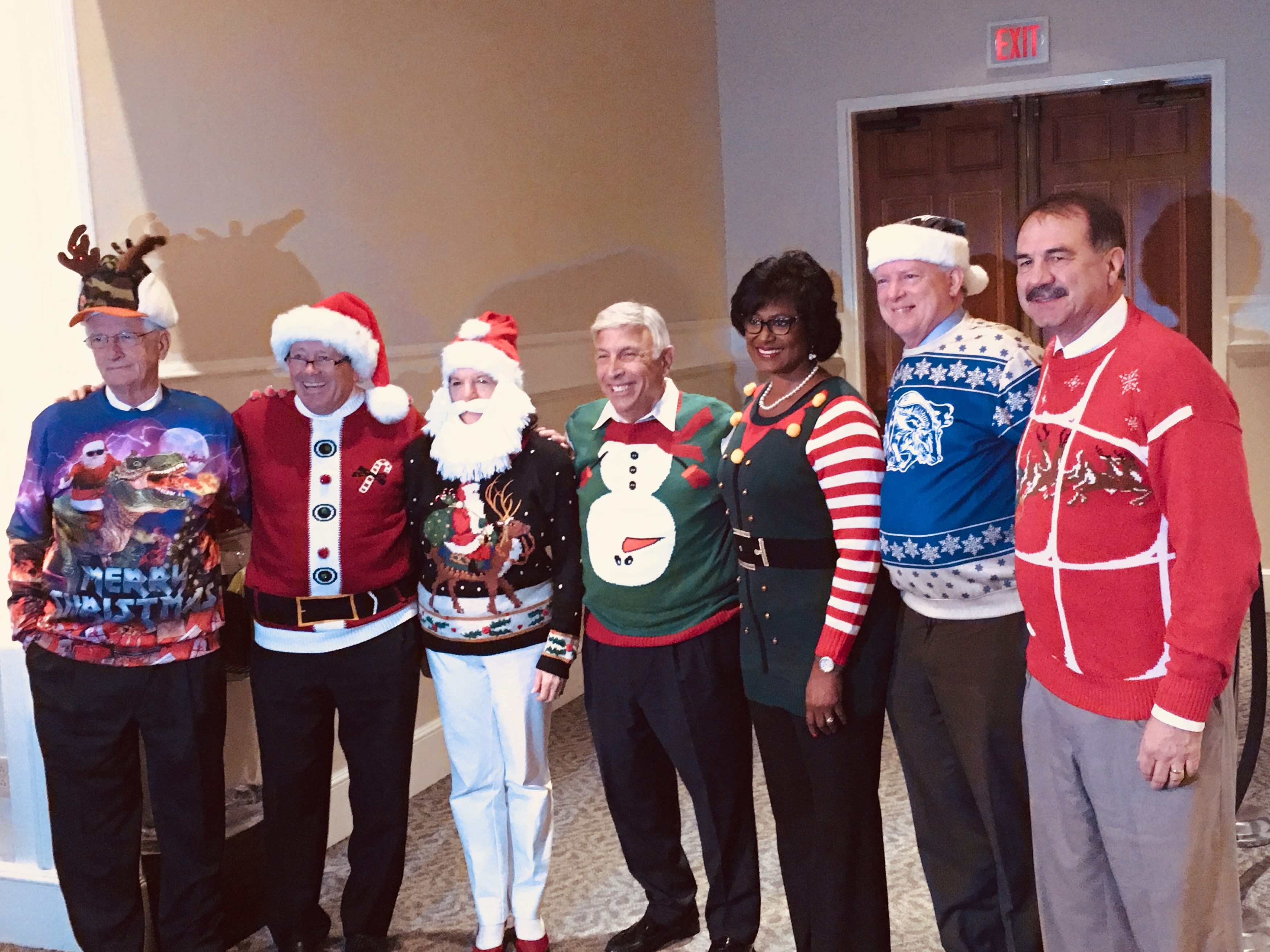 All good things come to an end: and so it is for the 2018 calendar for the Jacksonville City Council, which met Tuesday for the final time this year.

Just a few of the highlights, beyond the X-Mas sweaters depicted in the graphic….

Health care options for public safety: New changes to collective bargaining agreements for police and fire employees were to be ratified via the Council consent agenda, but were pulled by Councilman Garrett Dennis for questions.

Ordinances 2018-756 and 2018-757 would allow the unions to separate from the city health care plan in 2020. Public safety may have a negotiating advantage on insurance rates, given the overall health of police and fire being better than that of city employees. With defined benefit plans not available for new hires after 2016’s pension reform, better health plans can help with recruitment.

Dennis asked if the collective bargaining was a precondition for unions endorsing Mayor Lenny Curry‘s re-election. Once satisfied that it was not a quid pro quo, he said he’d vote for the bill.

Hart Bridge money: Mayor Lenny Curry has secured the $37.5 million needed to remove the Hart Bridge offramps and a stretch of the expressway, as a way of routing traffic and action onto Bay Street and near the showcase Sports Complex.

Ordinance 2018-785 appropriates $12.5 million from the Florida Department of Transportation, money ceded earlier this year for that purpose.

The U.S. Department of Transportation likewise came through with its $12.5 million share this week.

The federal grant application said the “project directly addresses the main impediment to development along the waterfront in this section of downtown. This project will demolish the elevated bypass, and in its place will construct a ramp from the Hart Bridge to street level on Bay Street. A second ramp will be constructed at the corner of Bay Street and A. Phillip Randolph Boulevard to go over Hogan’s Creek, a creek the City has plans to activate in the near future.”

The bill sailed through on the Consent Agenda.

Beyond development, the grant application pointed out the fact that the elevated expressway destroyed neighborhoods and that returning roadways to grade would help revitalize some of the most left-behind neighborhoods in the city.

Tighter ethics rules: Ordinance 2018-822, filed by Council President Aaron Bowman at the request of the Jacksonville Ethics Commission, mandates that officials and employees avoid leveraging their positions or resources for personal gain.

But this bill isn’t done yet.

The bill was substituted and re-referred to the Rules Committee.

On Tuesday, the Jacksonville City Council Rules Committee downed a bill that would have returned a $2.775 million grant from the United Arab Emirates.

City Council voted the appropriation through without a hitch in the summer, but second thoughts clouded members (and potential 2019 mayoral candidates) Anna Brosche and Garrett Dennis when they considered the UAE’s human rights record, deemed to be among the world’s worst.

Brosche and Dennis have become punching bags for the Council, and this bill saw most everyone on Rules take a turn before John Crescimbeni proposed a substitute to turn the bill into a gesture of appreciation.

Brosche wanted her name off the bill. Told she couldn’t do that, she motioned for withdrawal, and got it.

Or so it seemed.

Councilman Greg  Anderson urged no comments from the audience, as an Abraham Lincoln impersonator nodded.