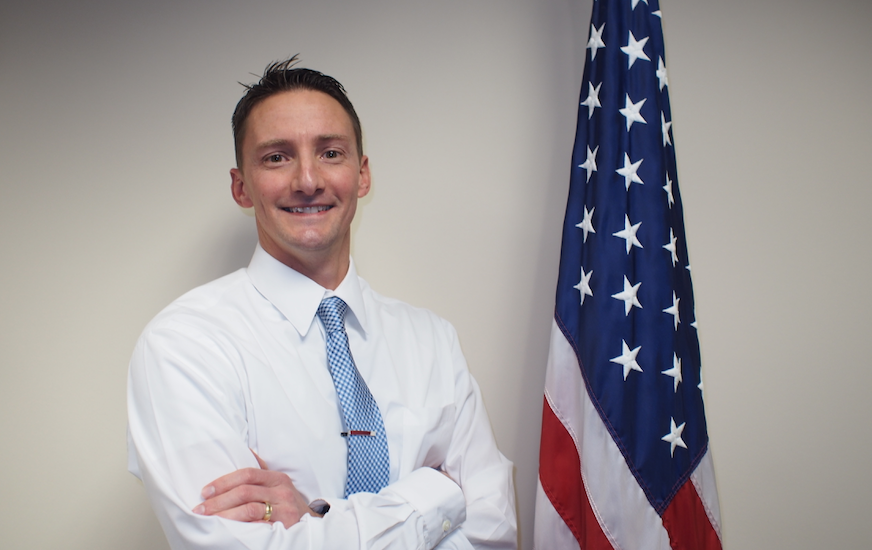 A former Navy intelligence official with a background in national security analysis who also is studious of economic theory, running on a generally moderate Democratic platform, seeking to flip a long-held Republican seat against a well-established opponent in increasingly purple Seminole County.

No, not Stephanie Murphy.

Meet Justin Miller. Thursday night Miller introduced himself to Seminole Democrats to officially kick off his campaign for Florida Senate District 9, a contest with another Democrat and a Republican opponent who ought to be considered a prohibitive favorite, former state Rep. Jason Brodeur.

“I love Stephanie Murphy,” Miller said. “She absolutely, positively represents the district well. She represents the party well. And she’s a Blue Dog. I stand somewhere between a Blue Dog and a New Democrat.”

Miller, 39, of Oviedo, spent 20 years in the Navy, mostly in intelligence operations, often working with the National Security Agency. He entered the Navy out of high school, and while in the service Miller earned a bachelor’s degree in political science and a master’s degree in public policy from American Military University. He retired from the Navy last year as a senior chief petty officer with designations in information warfare, surface warfare, and aviation warfare.  He now runs a non-profit in Orlando that provides scholarships for STEM students, and is developing a public policy think tank, the Policy Research Institute of Orlando.

In August Miller filed to run for the SD 9 seat, but his campaign has been quiet, and has not been raising money until now. Also in that race is Democrat Rick Ashby, an engineer from Oviedo, who is running on a more progressive platform. Miller characterized his Thursday’s appearance at the Seminole Democratic Executive Committee meeting as his debut.

“There’s work to be done,” Miller said of his desire to run. “I’m kind of an idealist. Not a naive idealist but I really think that the problems we have we can address in a civil way.”

Neither Democrat has much money yet. Miller has about $4,000 on hand, including $1,500 he lent his own campaign. Ashby has less. Brodeur, by contrast, has raised almost a quarter million dollars for his official campaign, and spent about half of that. Plus, Brodeur has another $120,000 socked away in an independent political committee that has shown the ability to raise [and spend] money in big chunks. Does Miller think he can compete?

“We’ve got traction to get to. There is a machine here in Seminole County. We haven’t tapped into that, I guess, but hopefully my kickoff will help us get some visibility,” Miller said. “I know that there are a lot of folks watching now that we’re into 2019 and gearing up for 2020.

“I’m an optimist. Seminole County is a 50-50 district. Semionole and Volusia County because District 9 creeps up into Volusia County. The district is evenly split, and so I think it’s competitive,” Miller said.

Miller defines himself as progressive, but not an ideologue. He passionately espouses most Democratic positions and values on education, equality, environment, gun laws, climate change, and health care, while describing himself as a fiscal conservative, and carving out an economics view that he says balances the needs for labor and business.

He also commits to making stopping human trafficking a priority, along with Medicaid expansion and addressing low wages.

“Inequality is a significant issue, not just for your economy, because the idea is people need to buy things to keep things moving, right? It’s all about monetary velocity. So If folks don’t have expendable income or can’t even pay their bills, that affects everything,” Miller said.

previousDelegation for 1.11.19 — Insights from the Beltway to the Sunshine State