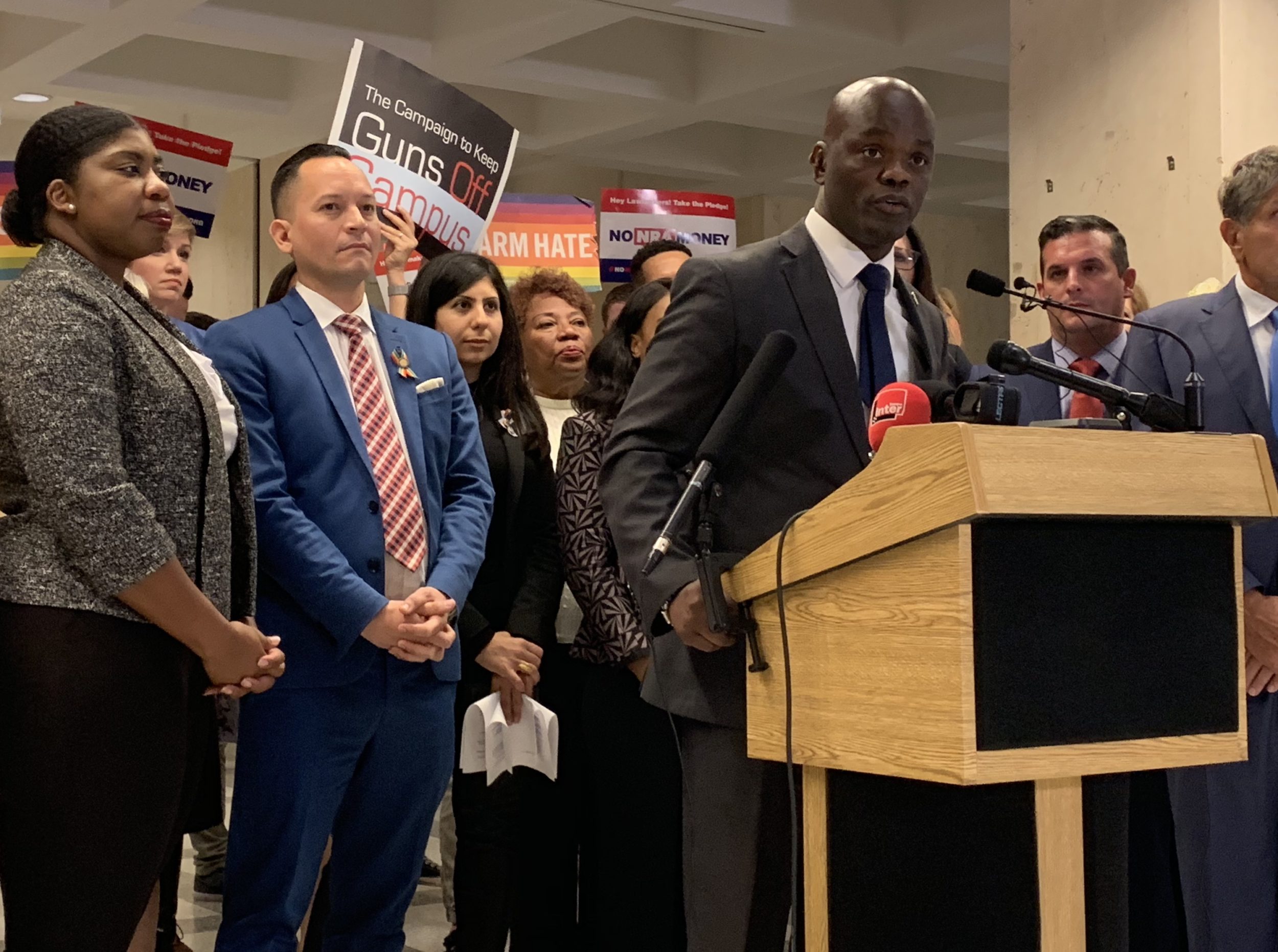 Legislators look for action after the Marjory Stoneman Douglas shooting.

Approaching the year mark of the Parkland high school shooting, Democratic lawmakers are highlighting a number of wide-ranging proposals to change the state’s gun laws.

The agenda comes as legislators split over whether the state should allow teachers to carry guns, an issue lawmakers already fielding deliberation ahead of the March 5 start of the Legislative Session.

House Democratic Leader Kionne McGhee of Miami suggested his party colleagues will be adamantly opposed to the measure, included in SPB 7030 and recommended by a fact-finding panel spawned after the Parkland tragedy on Feb. 14 that left 17 students and staff dead.

“I am 100 percent against arming teachers, it doesn’t make sense,” McGhee said. “It’s very dangerous as it is now when scissors are thrown across the classroom — we don’t need to add into that mix a firearm that can dislodge projectiles that cause bodily harm. It’s wrong.”

One proposal highlighted during the Tuesday news conference would offer counties flexibility with money that otherwise would be spent on a controversial school guardian program.

The guardian money could instead be used by districts for “school safety programs,” the bill’s language reads.

Those measures (SB 712 and HB 655) are part of a number of other bills on the Democrats’ gun-control agenda.

Lawmakers passed and Republican then-Gov. Rick Scott signed into law major departures from the GOP norm on gun control last year, including a mandatory three-day waiting period for firearms purchases and an increased age prerequisite (21) for all gun purchases.

Still, some measures little chance of going anywhere in the Republican-controlled Legislature. During his remarks, McGhee noted that changes to gun policy at the state level have “chances of passing that are very slim.”

For example, Democrats are again championing an all-out ban on assault weapons and high-capacity magazines (HB 455 and SB 466). The Florida House made national headlines last year after refusing to consider the same provision on the floor.

Parkland activists are attempting to circumvent the legislative process by getting a similar ban on the ballot in 2020.

State Rep. Margaret Good, a Sarasota Democrat who says she took office hours before the Parkland shooting, is sponsoring a universal criminal background check bill (HB 135). It seeks to prevent unlicensed sellers from selling guns to a buyer who hasn’t undergone a background check.

“I have done the research: states that require background checks have fewer instances of gun-related violence,” Good said.

Other gun bills backed by Democrats make modest changes and could be more palatable in Tallahassee.

As Orlando Democratic Rep. Carlos Guillermo Smith put it: “The reality is that there are so many options for [Republicans] to choose from.”

South Florida Rep. Javier Fernandez is sponsoring a bill (HB 753) that would require the completion of a detailed firing range course in order to obtain a concealed-carry permit. Currently, Florida law requires other coursework, like a “hunter education or hunter safety course” approved by the Florida Fish and Wildlife Commission.

Fernandez jokingly referred to the measure as “really radical.”

Another bill on the Democrats’ agenda would make changes to who supervises the concealed-carry permitting process. While wonky and under the radar, the legislation could meet resistance.

The bill (SB 108), sponsored by state Sen. Lauren Book, a Plantation Democrat, would shift oversight of the concealed-carry permitting process to the Florida Department of Law Enforcement, overseen by an appointed official.

Currently, the program is under the Department of Agriculture and Consumer Services, now led by Democratic Agriculture Commissioner Nikki Fried.

But the National Rifle Association came out last week in support of keeping the program under Fried’s supervision, paving the way for opposition in the future.

Other bills are forthcoming, according to the House Democratic office. For example, vocal freshman Democratic state Rep. Anna Eskamani is filing a measure alongside Democratic state Sen. Lori Berman that would require those convicted of domestic violence to surrender their firearms.

Smith, who was first elected to the House after the 2016 Pulse shooting and is sponsoring the House’s assault-weapons ban, will also be filing a bill that would bar from buying guns people committed of hate crimes.