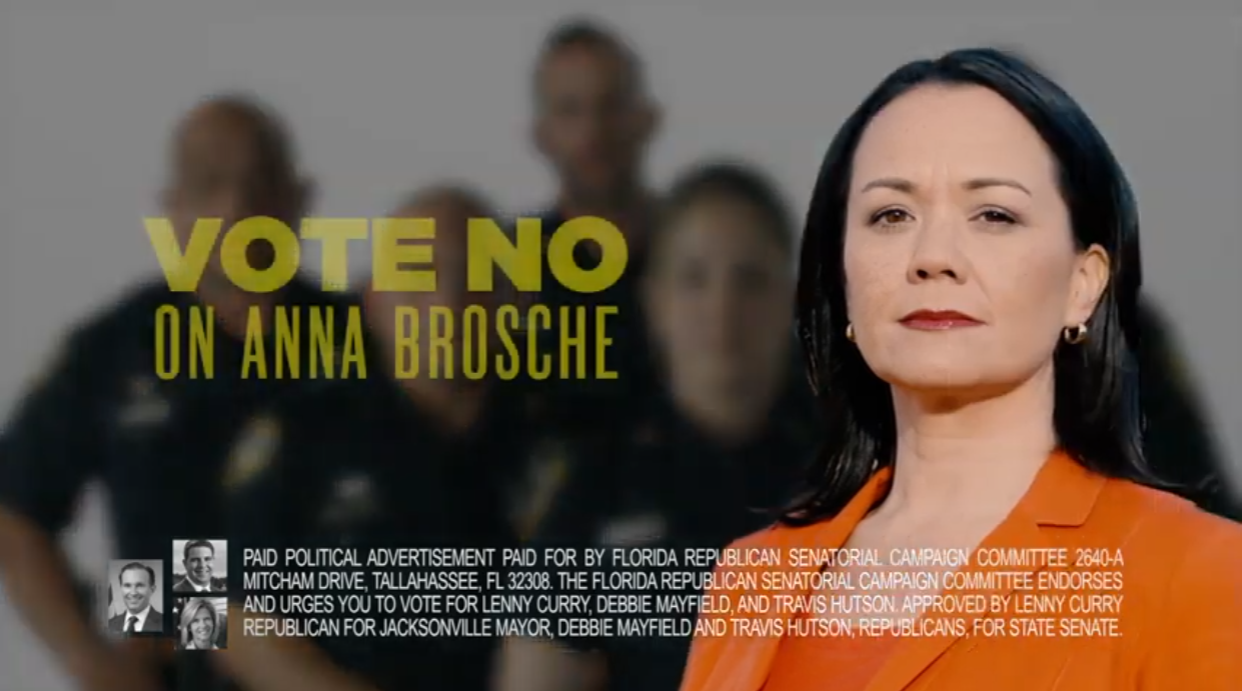 In Brosche’s one television spot, which started running last week, she said Curry had “nothing to say” about violent crime, as he was more focused on disparaging her.

The new Curry spot, with buys “shadowing” the Brosche spot, makes the counterargument.

With police officers doing the voice-over, the spot asserts that “Anna Brosche is lying.”

“She’s playing politics with life and death. She’s never had our back. And now she attacks the hard work of law enforcement,” uniformed peace officers say in the ad.

The spot contends that Brosche has never filed a bill relating to public safety, a major talking point of her campaign.

While she has signed onto bills regarding trespassing in Hemming Park and increased penalties for false burglar alarms, there is little indication that either of those issues will determine the 2019 election.

Nor do those cold-button issues particularly jibe with the campaign jeremiads about the so-called “Curry Crime Wave,” a rash of gun violence that saw Brosche, a Republican, stand with Jacksonville Democrats Monday as they called for curfews and enforcement from the National Guard and Florida Highway Patrol, with added help from President Donald Trump’s Justice Department.

Of the 135 bills Brosche sponsored, all but 22 were resolutions. Appointments comprised 71 bills, the bulk of those from her council presidency. 31 were honorary resolutions.

This spot was paid for via the Florida Republican Senatorial Campaign Committee as part of a three-pack, making this the third time Curry has used that mechanism to buy time at favorable rates.

The introduction of the new spot gives Curry three ads currently on television, with this spot joining the FRSCC-funded positive Cops for Curry ad, and a second spot slamming Brosche as trying to “sell” herself.

Metrics reveal a race where Brosche is still getting her footing, even as vote by mail has already started up.

Curry is up by 38 points in a public poll of the race conducted last week, and has nearly $2.5 million on hand.

Brosche and Curry are two of the three Republicans on the ballot. Atlantic Beach’s Jimmy Hill rounds out the trio. Independent candidate Omega Allen is on the ballot also.