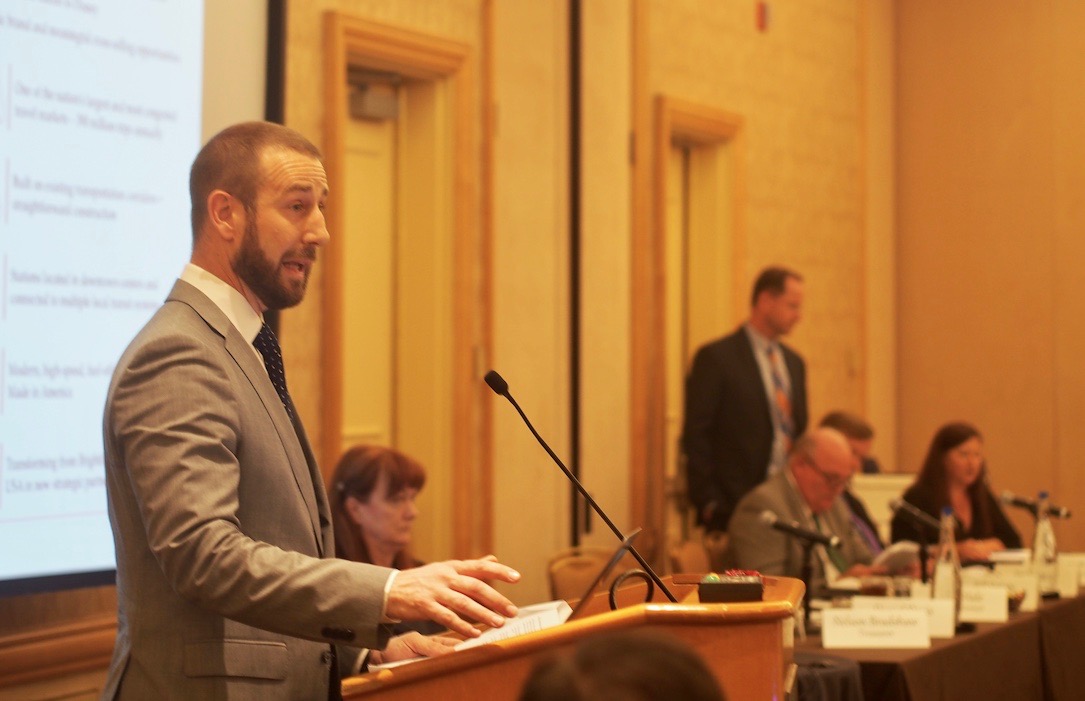 Virgin Trains President Patrick Goddard said the company is in talks with Disney World for a station.

Two hours of testimony turned out to not be enough, and the Florida Development Finance Corporation was forced Wednesday to recess its review of Virgin Trains USA’s request for $2.7 billion in private activity bonds to build a private passenger railroad until another meeting.

The train company, formerly known as Brightline and before that as All Aboard Florida, is seeking to increase its authority to sell the low-cost bonds by another $950 million over the last time the state’s private financing agency gave it a go-ahead. It needs the money to extend its higher-speed, private, passenger rail operation from South Florida to Orlando.

The company has struck deals to reduce organized opposition to its plans, reducing it largely to officials and residents of one county along the route, Indian River County. However, there were no clear tracks Wednesday during the corporation’s board meeting in Orlando.

After the company’s presentation, organized responses from Indian River County and a group called Florida Alliance for Safe Trains, and more than a score of individual speakers giving their views, the board’s general counsel suddenly advised Chair Daniel Davis that they were just about out of time. That came even though there remained 27 speakers signed up to give views on why Florida should or should not sign off on Virgin Trains’ financing package, plus the board’s debate and decision.

Caught in the realization that there was no way to finish in time Wednesday, and that extending into the evening could put the board in violation of Florida’s Sunshine Laws, the board suddenly adjourned, vowing to call another meeting soon to finish the business.

Left in a lurch is Virgin Trains, whose president Patrick Goddard declared the company’s construction plans for the West Palm Beach to Orlando railroad is shovel-ready if only the company can sell the bonds. The company previously had received approval to sell $1.75 billion in private activity bonds, which are federally authorized, tax-free securities that must have state approval. On Wednesday the company was seeking reauthorization of that, plus another $950 million.

A bevy of local, state, and federal officials or their surrogates expressed their eagerness to see the project get underway toward providing Florida with the nation’s first private, intrastate, high-speed, passenger rail system, connecting two of the biggest tourist spots in the world, South Florida and Orlando.

The opponents focused much of their argument on disputing Virgin Trains’ financial picture, essentially charging that the company keeps coming back for financing authorizations and reauthorizations because the company has been unable to convince investors, to date, to get onboard the train. The opponents warned that the FDFC board was being asked to sign off on a financing package with a company they expected to go belly-up. And that could force Florida, they warned, into the awkward position of considering whether to bail out a private railroad that so many elected officials had so publicly backed.

Goddard was having none of that pessimism. He insisted that the first phase, linking Miami, Fort Lauderdale and West Palm Beach, is doing well enough now, and will do even better once Orlando is added to the system.

Goddard said the company wants to break ground this spring on the South Florida to Orlando railroad and wants to be running private passenger trains, going as fast as 110 mph through the Treasure Coast, and 120 mph between Cocoa and the Orlando International Airport, within three years of that.

Virgin Trains also has plans to extend from Orlando to Tampa, but that wasn’t part of Wednesday’s discussions.

However, Goddard did say the company is in discussions with the Walt Disney Co. for a station at Walt Disney World. That would be a key part of any Orlando to Tampa passenger railroad.

“The business is ramping up very well,” Goddard said. “We have a clear line of sight for covering expenses and debt service and ultimately profitability. Our system is not just improving mobility in our state and directly contributing billions to the economy, but in addition will continue to generate significant indirect, incremental, economic activity for this state for decades to come.”

How come then, opponents contended, the company’s filings show it has fallen well below its original ridership projections, and that the company lost tens of millions of dollars in each of its first three quarters of operation reported since the South Florida service initiated in early 2018? And why did the state’s Office of Program Policy Analysis and Government Accountability recently project the company will need to spend $3.7 million on the South Florida to Orlando phase, roughly double Virgin Trains earlier estimate, and well above what it’s now seeking? they asked.

“So, we have shaky financial information and now we have uncertain costs going forward. … This project needs to be financially feasible and needs to demonstrate the ability to repay the investors,” said Indian River County’s County Attorney Dylan Reingold. “Now that you’ve seen the real numbers the FDFC must either reject or defer this request.”

If Davis or the board at all signaled its expectations, it may have been in how Davis sought, in the last few minutes he had left, to agreed to let the opponents speak, assuming most of the proponents would waive their testimony.

previousSixty Days for 3.6.19 — A prime-time look at the 2019 Legislative Session