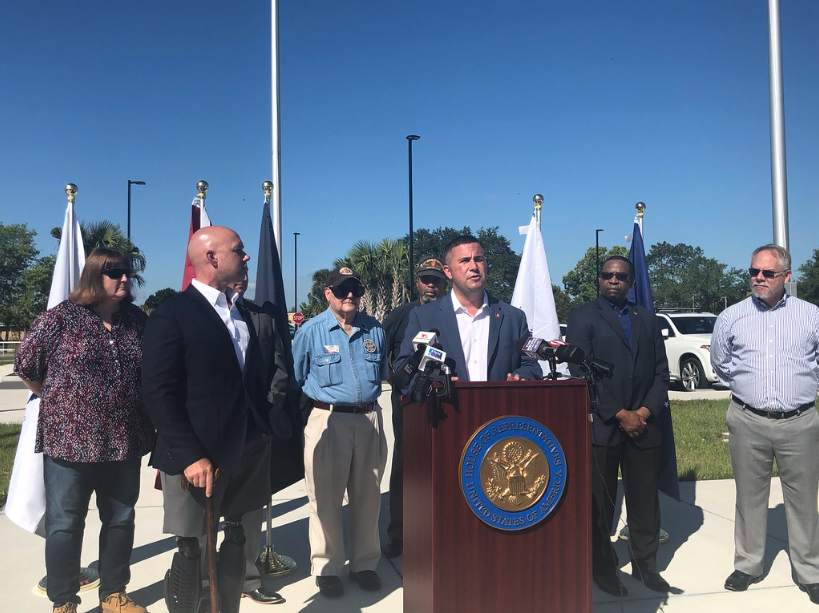 Contending that federal red tape makes it far too difficult now, two Florida members of Congress who have opened field offices in Veterans Affairs hospitals introduced a bipartisan bill Monday to make it easier for their colleagues to do so.

Republican U.S. Rep. Brian Mast of Palm City and Democratic U.S. Rep. Darren Soto of Kissimmee announced Monday they are sponsoring the Improving Veterans Access to Congressional Services Act. In short, the act instructs the U.S. Secretary of Veterans Affairs to make it happen if a member of Congress asks to put a district field office inside a VA hospital.

At a news conference at the 65th Infantry Veterans Park in Kissimmee Monday morning, both said the offices have been invaluable to helping veterans.

“At its core, this legislation is about helping our veterans,” Soto said. “Having congressional offices located inside VA facilities allows for more efficient and easily accessible services provided to veterans who need it most. Almost half of our office’s constituent casework are veterans cases. Since we opened our congressional office in the Lake Nona VA Hospital, we’ve been able to increase our in-person, same day walk-in services for veterans. Representative Mast and I are proof of the benefits our offices can provide. We hope this can be replicated in VA facilities across the nation.”

The bill also requires the Department of Veterans Affairs to develop regulations regarding the use of VA office space by members of Congress, mandating that the space be made available during normal business hours and in a location that is easily accessible to the member’s constituents.

“Serving veterans in our community is not only deeply personal to me, it’s also the most frequent request that I get as a member of Congress,” Mast said. “Opening the first-ever congressional office inside a VA hospital has allowed us to help veterans on the spot: when and where they’re having an issue. Every single member of Congress should do the same at their local VA and this bill will pave the way to make that high level of service a reality for our veterans.”