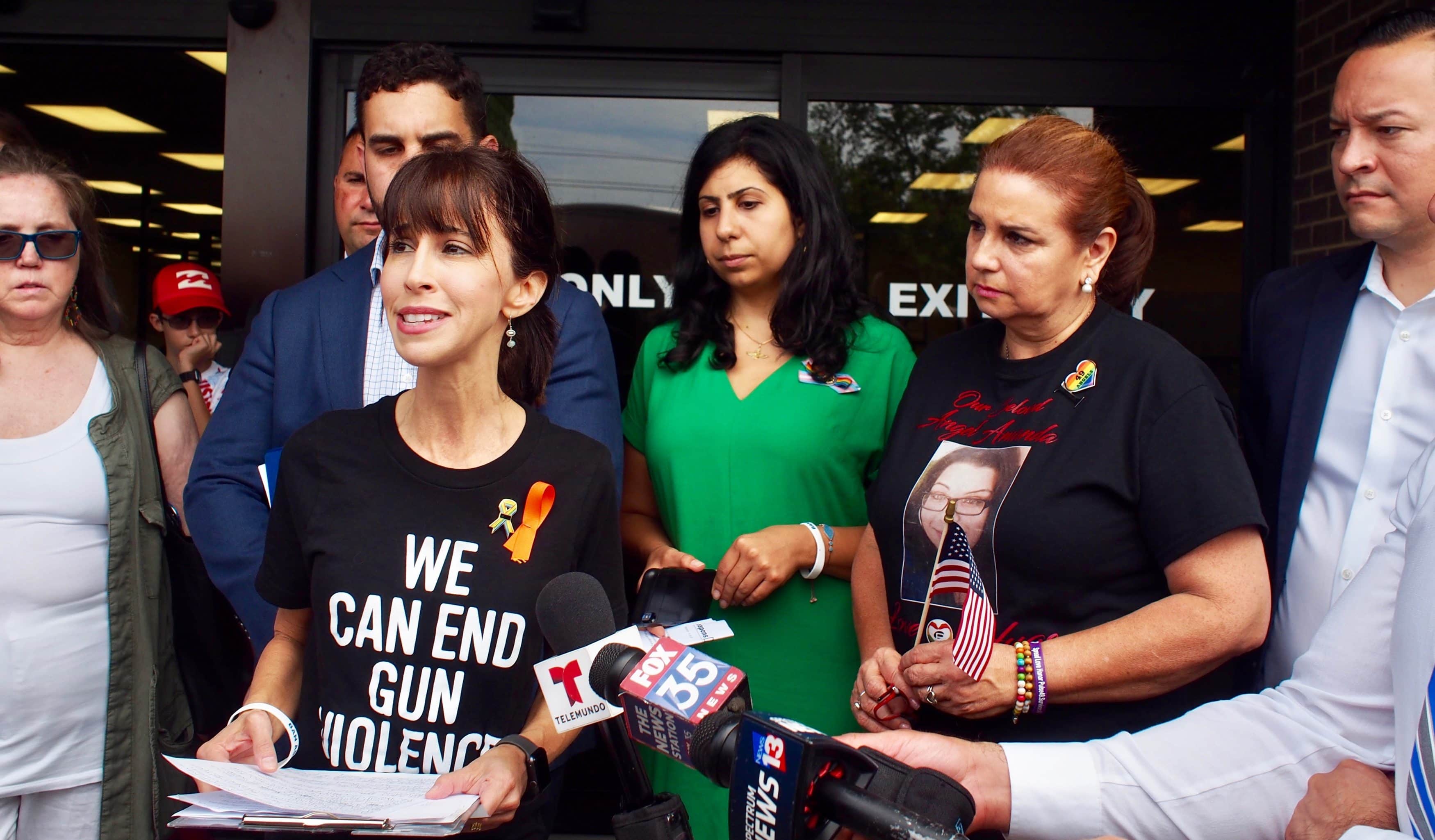 'This is a huge milestone,' Schwartz said.

Organizers of a drive to have a proposed assault weapon ban constitutional amendment on Florida’s 2020 ballot said they have topped 100,000 signatures and expect to get a review of ballot language by the Florida Supreme Court any day.

Ban Assault Weapons NOW and the League of Women Voters of Florida joined with Democratic state Reps. Carlos Guillermo Smith and Anna Eskamani and U.S. Rep. Darren Soto Monday to announce they’ve reached the point where they expect the review.

They also vowed that final approval Friday of HB 5, which restricts citizen initiatives to get measures on the statewide ballot, will not slow them down.

They met at the Orange County Supervisor of Elections Office Monday to turn in another 728 petitions. The news conference was held minutes after one concluded a few blocks away at Pulse, where organizers are preparing to mark the third year, Wednesday, of the massacre there that left 49 dead and 53 wounded. The Ban Assault Weapons NOW conference included family members of people killed at Pulse on June 12, 2016, and at Marjory Stoneman Douglas High School on Feb. 14, 2017, in Parkland, a massacre that took 17 lives.

Both gunmen used semi-automatic rifles that once were banned under federal law as assault weapons.

“Ban Assault Weapons NOW, a bipartisan initiative, has submitted over 103,000 signed petitions from Floridians all across the state who agree that enough is enough,” said Gail Schwartz, aunt of Parkland victim and chair of Ban Assault Weapons NOW. “We will soon be headed to Florida’s Supreme Court with our amendment that will, for the first time, give voters a say in the types of weapons we want [to be] sold in our state.”

The proposed amendment would ban “semi-automatic rifles and shotguns capable of holding more than 10 rounds of ammunition at once.”

“This is a huge milestone,” Schwartz said.

Orange County Republican Chair Charles Hart blasted the proposed amendment and the effort behind it for seeking to take away fundamental constitutional rights from law-abiding people. Hart charged that Democrats are behind the movement and are taking advantage of suffering people and “a change in the political wind.”

He predicted the drive could backfire and bring people to the polls to vote support gun rights and to vote Republican while they’re in the booth.

Acknowledging that many of the people behind the drive lost family members at Pulse or Marjory Stoneman Douglas High School, Hart added:

“People are suffering. They’re upset. They have a right to be upset. But I don’t think they have a right to take away a fundamental right that every law-abiding citizen has. Their suffering is immense and my heart goes out to them. But at the same token, this is a right everyone should have.”

Ballot amendments must gather 76,620 petitions to trigger a Florida Supreme Court review and need 766,200 in all in order to make the ballot.

After reaching 76,620 verified petition signatures, the proposed ballot language goes before the Court for a review to determine if it meets Florida requirements for a ballot petition.

Should the question reach the 2020 ballot, it likely will lead to one of the fiercest and costliest pro- and con- campaigns ever, as evidenced by the harsh political divide. Patricia Brigham, president of the League of Women Voters of Florida, pointed out that public opinion polls have consistently found high majorities of Florida voters in favor of some sort of ban of assault weapons, especially since the Pulse and Parkland tragedies.

If it makes the 2020 ballot, it would need to earn approval from 60 percent of voters to pass.

Soto, Smith, Eskamani, and family members of victims and a Pulse survivor spoke of the need for a ballot initiative in Florida because the Republican-controlled Florida Legislature has not allowed committee hearings on bills to ban assault weapons sales.

“This is ingenious, Gail, because this is exactly what we need,” said Christine Leinonen, mother of Pulse victim Drew Leinonen. “We will be the first state in the country to ban assault weapons through this means.”

Smith noted he has introduced legislation to ban assault weapons in three consecutive Legislative Sessions since Pulse, and none was given any committee hearings or support by the Republican leadership.

“That is why we are here today,” he said Monday. “We are prepared to collect the number of petitions necessary to get this on the ballot so that voters can decide the issue once and for all.”

Eskamani noted that her House District 47, covering northern and central Orange County, is home to Pulse “where three years ago this week we lost 49 mostly queer black and brown people to the hands of one assault weapon. My motivation to run for office was to honor those no longer with us through action.”

To view the video, click on the image below: