Last Call for 6.11.19 — A prime-time read of what's going down in Florida politics

(This year’s budget is a Senate bill so the timing was up to Senate President Bill Galvano as to when to send it. The House and Senate trade off every year.)

“The Senate had been coordinating with the Governor’s Office to determine the timing of the presentation of Senate bills to the Governor,” Betta explained.

But line-item vetoes already are in the offing, the Governor said, also Tuesday, according to The News Service of Florida.

Appearing at a bill-signing event in The Villages, DeSantis — who has line-item veto power over state budgets — said he and his staff completed a “first glance” at the line items in the $91.1 billion budget.

“Some of them (budget items) obviously just don’t pass muster with me, so they’re not going to make it,” DeSantis said, not indicating which ones.

“There’s others that definitely pass muster, so they will.”

The budget is, of course, publicly available, but once he officially receives it he has 15 days to act or it goes into effect in its entirety without his signature.

The fiscal year starts July 1; by Friday, it will have been 40 days since lawmakers passed the budget.

“It seems to me we’re wasting a lot of time discussing a statute that doesn’t matter anymore.” — 1st DCA Judge T. Kent Wetherell II, during oral argument in a case involving the state law that implements the constitutional amendment authorizing medical marijuana in Florida. 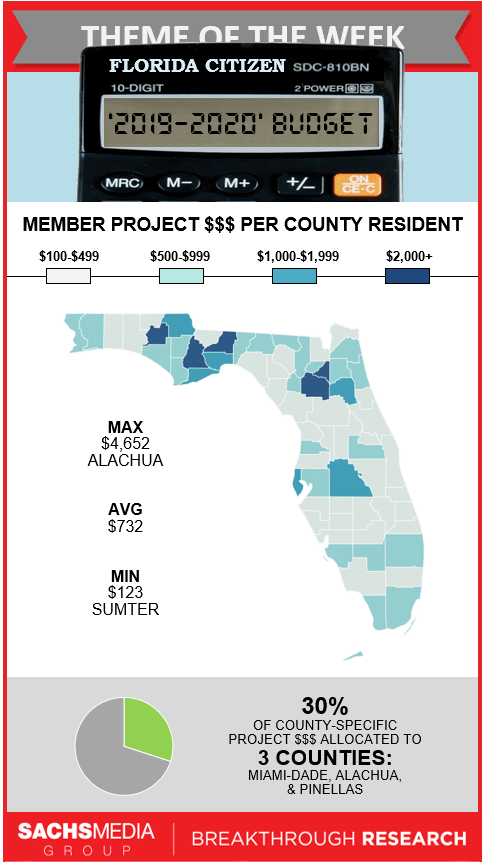 The Florida Association of Counties will hold an annual conference, with Agriculture Commissioner Nikki Fried expected to speak during an opening session. Other scheduled speakers include GOP Sen. Debbie Mayfield, and Republican Rep. Holly Raschein, who will discuss water policy. A Florida Association of Counties board meeting is scheduled for 8:30 a.m., with the conference opening session at 10:30 a.m., Hyatt Regency Orlando, 9801 International Dr., Orlando.

The state Revenue Estimating Conference will hold what is known as a post-session “impact” conference. That’s at 9 a.m., 117 Knott Building.

The Claims Committee of the Citizens Property Insurance Corp. Board of Governors will hold a conference call that is slated to include an update on the 3,333 lawsuits filed against the insurer in the first four months of the year, a monthly average of 833 that is down 22 percent from the same period a year earlier. Nearly 90 percent of residential lawsuits are from Miami-Dade, Broward and Palm Beach counties. As of April 30, the state-backed insurer had 14,091 lawsuits pending, which is up 14 percent from a year ago. That’s at 10 a.m. Call-in number: 1-866-361-7525. Code: 5219676193.