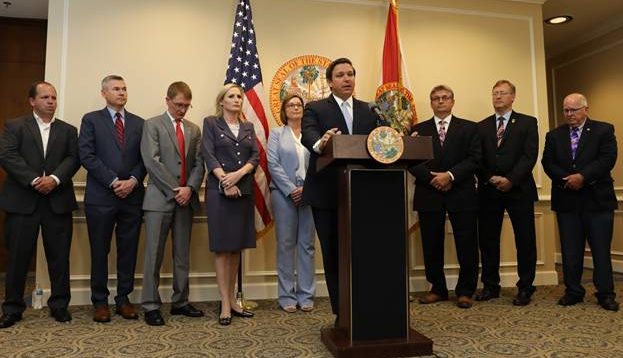 Gov. Ron DeSantis said he is “redistributing” $2.3 million from the federal government to counties to boost election systems security.

He appeared Monday at the Capitol to make the announcement with several county elections supervisors and Secretary of State Laurel Lee, the state’s chief elections officer.

The move is “to ensure the safest, most up-to-date modifications are made to our (elections) infrastructure,” he said.

The money is what’s left over from a $19 million federal election security grant provided to Florida for the 2018 cycle. It wasn’t all spent in time for that election.

The money DeSantis announced Monday is in addition to $2.8 million appropriated by lawmakers this year “to enhance cybersecurity for our election systems in preparation for 2020,” the Governor said.

“Public faith in our elections (is) the cornerstone of our democracy,” he added. “I’m going to take every step necessary to preserve the integrity of our infrastructure,” including addressing vulnerabilities and funding additional resources needed.

In 2018, Florida accepted $19.2 million from the federal government to further secure voting systems that were targeted by Russian hackers in 2016.

Two attempts to breach Florida elections systems were noted as part of an indictment issued by Special Counsel Robert Mueller against 12 Russian intelligence officers for hacking Democrats in 2016.

County elections supervisors were supposed to be able to use the money for such things as software security upgrades and improving the safety of buildings in which election equipment is stored or used.

DeSantis also said work continues in a review of the security — particularly cybersecurity — of Florida’s election systems. He had asked the Department of State to evaluate election security after the FBI disclosed to state officials that Russian hackers successfully breached two counties’ election data ahead of the 2016 election.

His order directed Lee to make the review a top priority and “identify and address any vulnerabilities.”

When reminded that the previous Rick Scott administration made the counties return any unspent money from the grant, the Governor said that administration didn’t have the full story on the extent of Russian hacking in 2016.

“As you know, this has become an issue in the last couple of months in a way that I did not know and really no one appreciated because the public wasn’t informed,” he said. “I was never briefed on it. … We figured, hey, you know, we want to make sure that they (county elections supervisors) have resources. We’re taking the issue seriously.”

DeSantis earlier this year had asked for funding for a “cybersecurity unit” inside the Department of State, which lawmakers turned down.

“We might” ask again next year, DeSantis said. “I want to see, you know, how all this works …  I’ve said previously, you know, the issue of cyber is not going away … this is not a one-off deal and it’s not just to do with elections.”