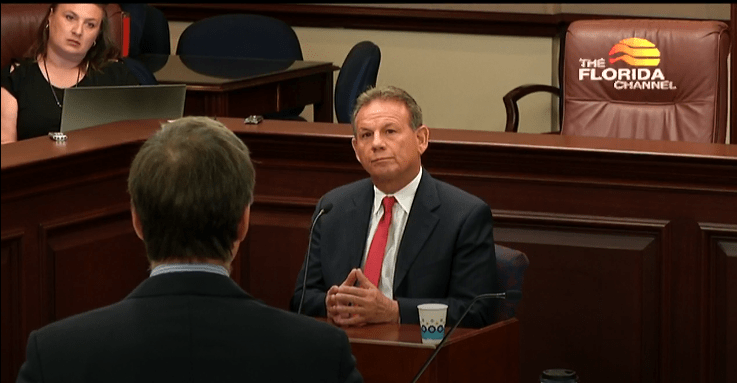 “I’m responsible for all the actions and inaction of every member of the agency."

Scott Israel spent seven hours in the witness chair Wednesday, as the suspended Broward Sheriff argues to be reinstated as head of the Broward Sheriff’s Office (BSO).

That follows a 90-minute block of testimony from Israel on Tuesday. Former lawmaker Dudley Goodlette is overseeing the hearing as special master.

Goodlette was assigned by Senate President Bill Galvano to preside over the proceedings and ultimately issue a recommendation to the Senate. That body will determine whether to terminate Israel or reinstate him as Sheriff.

Goodlette’s report is not expected until at least August.

Israel began the day being questioned by his own attorney, Ben Kuehne, regarding his role overseeing the shootings as Stoneman Douglas High School and the Fort Lauderdale Airport. Gov. Ron DeSantis cited BSO’s handling of both those attacks in his Executive Order suspending Israel.

They spent a large portion of the day on the 2018 Parkland shooting, which resulted in 17 deaths and 17 more injuries. BSO deputy Scot Peterson, who worked as the school resource officer at the high school that day, was recently arrested and charged for failing to confront the shooter during the attack.

Kuehne asked Israel whether he had any reason to believe Peterson would not immediately enter the building, based on BSO training guidelines. Israel said he did not.

“Had I had that knowledge,” he said, “I would have removed him as a deputy.”

That issue was revisited on cross-examination, as DeSantis attorney Nicholas Primrose pressed Israel on the whether the department’s active shooter training requirements were sufficient.

“It was your decision. You could have prioritized certain training more often, right?” Primrose asked.

“And you could have made the school resource officers do the active shooter training on a more frequent basis than just once every three years?” Primrose asked.

The suspended Sheriff asserted that active shooter training was not “perishable,” and that deputies were able to retain information from those sessions. But Primrose pointed to Peterson’s failure to try to neutralize the shooter, despite that training.

Ultimately, Israel did state, as Sheriff, he was responsible for Peterson failing to enter the building.

“I was responsible for his inaction that day,” Israel said. But Israel argued that his “responsibility” was manifested in ensuring Peterson faced the consequences. Israel stood by his earlier testimony that he could not have foreseen Peterson responding the way he did.

“And as soon as I saw that video, being a tactical officer myself, I suspended him, brought in an internal affairs investigation, and was ready to wait for the results and take action.”

“Did I hear you correctly in saying that you are, in fact, responsible for his actions or inaction that day?” Primrose responded, highlighting Israel’s partial concession.

“As every Sheriff, I’m responsible for all the actions and inaction of every member of the agency,” Israel said.

Primrose later replayed a controversial interview Israel had with CNN’s Jake Tapper back in 2018. In that interview, Israel said he had given the agency “amazing leadership.” He also seemed to shirk any responsibility for Peterson’s actions whatsoever, telling Tapper, “It’s not the responsibility of the general, or the President if you have a deserter.”

Israel walked those remarks back on Wednesday.

“I don’t think I conveyed appropriately to the American public about responsibility. Of course, I take responsibility for everything that goes on in the agency,” Israel said.

Primrose also grilled Israel on reports showing BSO had encountered the Parkland shooter before, even receiving information that he planned to carry out a mass shooting. Two deputies were punished, but not fired, after failing to document those reports properly.

Israel said his agency’s hands were tied, and that even had he gotten word of the potential threats made by eventual shooter Nikolas Cruz, no arrest could have been made, as Cruz had not yet committed a crime.

Primrose pressed Israel as to why the agency did not have a policy in place to send any reports of a mass shooting straight up to the sheriff.

“I don’t know of any agency in the United States of America who has that protocol in place,” Israel responded.

“Yesterday, today and tomorrow we had the appropriate policies in place, and they were trained to do reports. And if those reports were serious enough, they would have gone up the chain of command, eventually to me if need be.”

Israel ultimately said that should he be reinstated, he would seek to serve out the remainder of his term as Broward Sheriff.

“If that’s the Senate’s will, I would fulfill my term, yes.”

Primrose closed his questioning of Israel by asking whether Israel believes in any way he was incompetent or neglected his duty while heading the BSO. Israel asserted he did not.

“The only singular person I’ve ever heard say that is your boss, Gov. DeSantis. I’ve heard no one else say that, sir.”

previousBoeing moving its Space and Launch division to Titusville