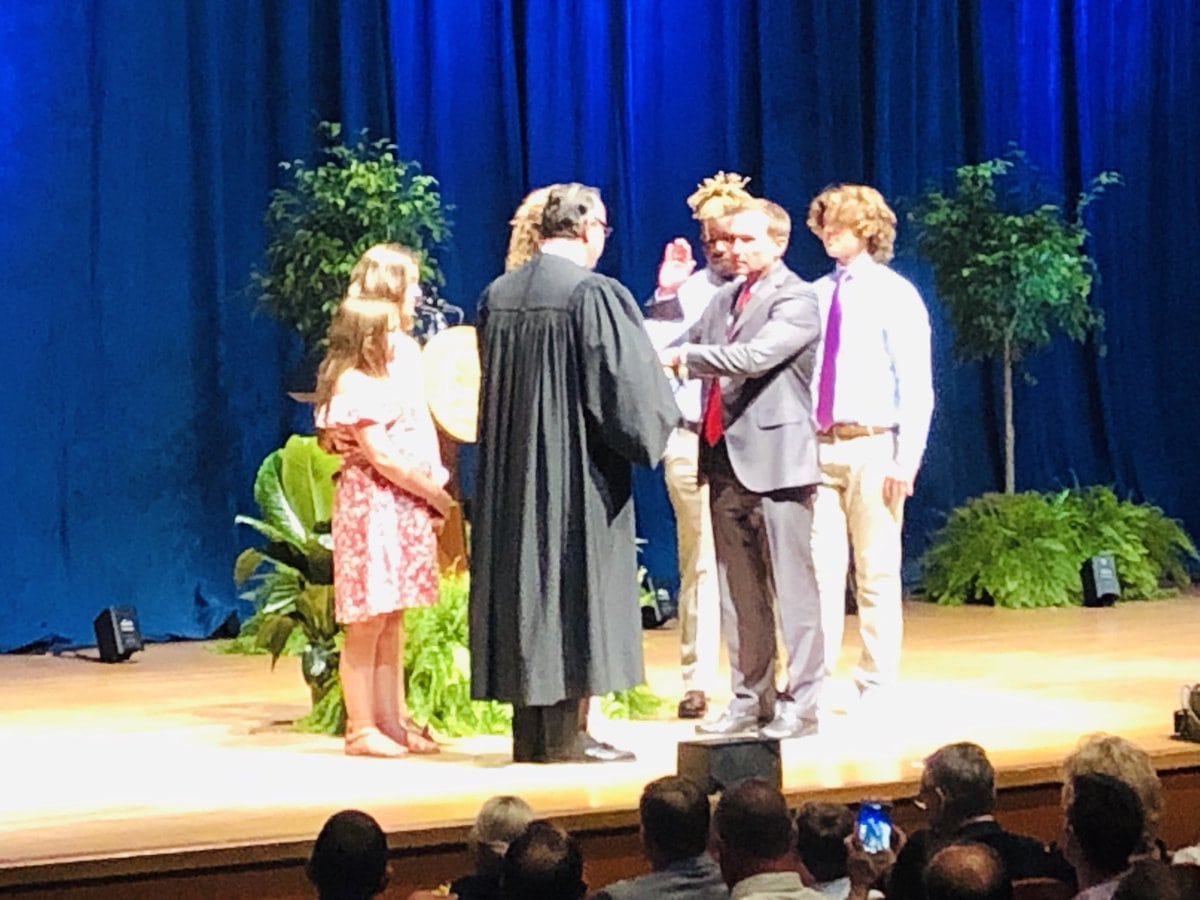 Four more years were made official for Jacksonville Mayor Lenny Curry, with a half-empty Times-Union Center the scene for his second Inauguration.

Curry augured the One City, One Jacksonville theme four years ago, in what was a packed auditorium.

Monday’s speech was a “promises made, promises kept” address, with a plethora of empty seats amidst the attendees, despite robust donor class support on the inaugural committee.

Curry won reelection in March with 57 percent of the vote. However, his bare-knuckled political style, atypical of previous Jacksonville Mayors, has led to conflicts on issues such as when to vote on a sales tax for school construction and what to do about local utility JEA.

Though there were no protests inside, of course, outside was a different matter.

We out here in front of the Times Union Center to tell @jsosheriff that we say NO to a 35 million dollar JSO budget increase and that money should be invested into the community! #FundEducationNotIncarceration #NoAnotherDime #FundJobs #FundMentalHealthEducation pic.twitter.com/3Hl16XeH6G

The energy was muted, and Curry slammed through his remarks, speaking as if racing a clock.

“Where has the time gone,” Curry asked, leading into acknowledgements of his family, first responders, members of the City Council.

Murders are spiking this year, with 81 already, despite heavy fiscal and rhetorical investments in public safety.

Curry also gave a hat tip to “school choice” in his remarks, notable given the intro was by the Executive Director of KIPP, and given the school tax referendum still being considered.

Curry has re-introduced wife Molly Curry into recent branding, and people will watch with interest how she is deployed through this second term and ahead of 2023.

Molly introduced her husband Monday, describing his “passion” for the city, a “non-stop drive and desire to make Jacksonville better.”

“A lot of early morning meetings,” Mrs. Curry said, “and some may have happened after he spent the night on Twitter.”

Mayor Curry strikes a combative posture on Twitter at times.

Williams, in brief remarks, heralded a “transformation” in the community, with “collaborative efforts.”

“We will continue walking side by side with you,” Williams said. “We will stay the course with a sharpened focus … every neighborhood deserves to be safe.”

Williams lauded collaboration with city leaders and their “steadfast commitment to safety.”

Williams, who some believe has the clearest path to the Mayor’s Office should he want it, was introduced by Kent Stermon.

Rev. John Guns, who reprised his words of inspiration for four years before, urged “critics” to embrace the “unifying vision of our Mayor and Sheriff.”

Whether that happens or not, and the city “rises above polarization” as the pastor urged, remains to be seen.

“Let’s ride,” Guns said, just as he did four years prior.

Though Guns was working the mike as effectively as he did the last time he gave such remarks, the crowd sat on its hands for most of his remarks, a measure of the gap of time between 2015 and today.

At the end, however, they stood and gave him a standing ovation.

previousSunburn — The morning read of what’s hot in Florida politics — 7.1.19