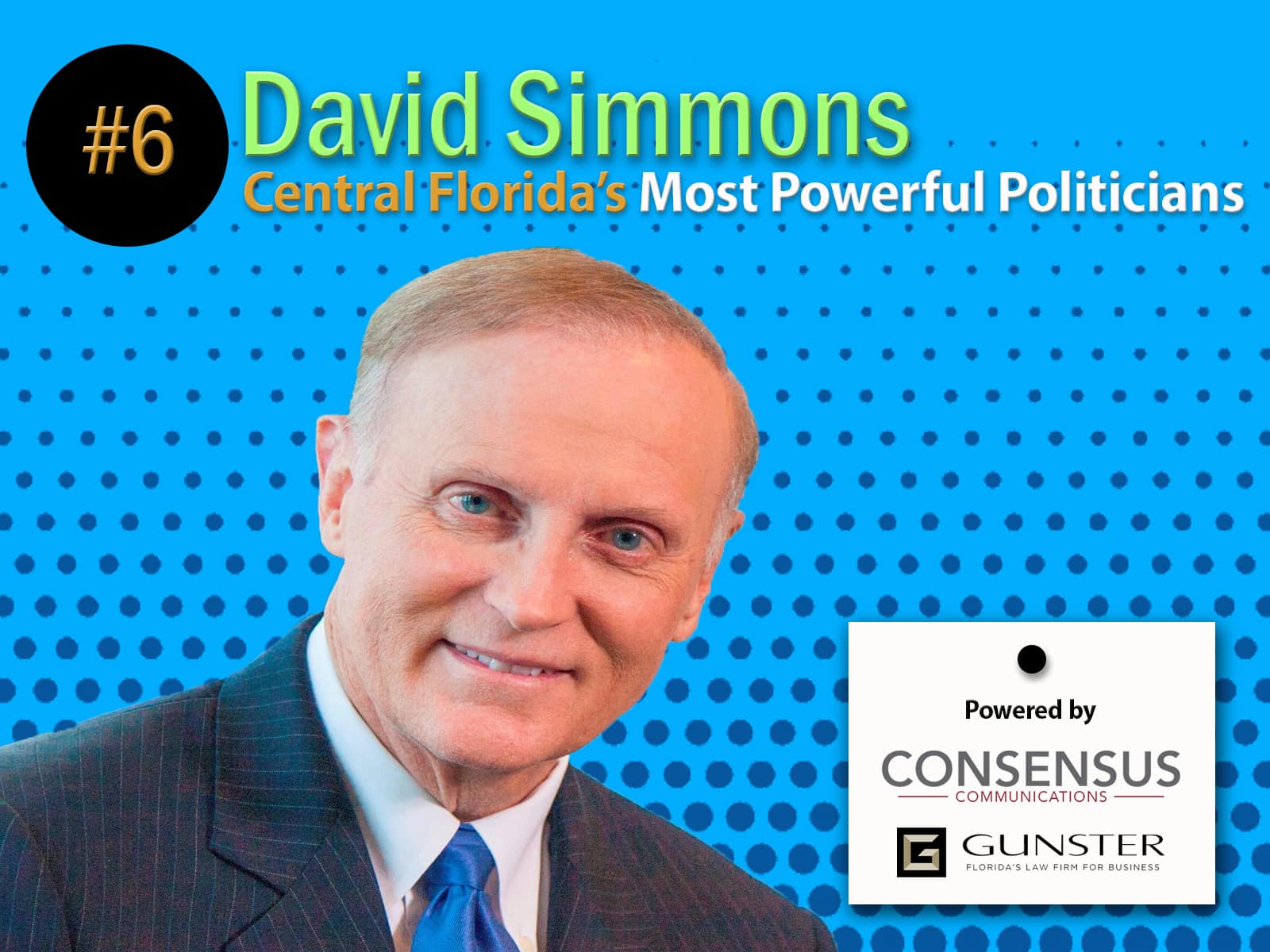 For nearly the entire 21st century so far, state Sen. David Simmons‘ measured and dignified approach to conservative politics, lawmaking, and public speaking has set a rhythm to policy leadership that has drawn widespread, bipartisan appreciation and respect.

That makes Simmons, 67, a Republican who represents Florida Senate District 9 in Seminole County and southwestern Volusia County, the most powerful member of Central Florida’s legislative delegation. Overall, he is the sixth most powerful elected official in the Florida Politics Central Florida 25 most Powerful Politicians survey.

For Simmons political influence and policymaking always have been about getting things done, toward conservative goals, without ever getting nasty or personal. It has worked for him for nine years in the Florida Senate and before that during eight years in the Florida House of Representatives.

“A long-standing member of the Florida Legislature now serving in the Florida Senate, Sen. Simmons has carved out his niche as a thoughtful and meticulous policymaker. He is a legislator’s legislator,” said Derek Bruce, managing shareholder at Gunster in Orlando. “In an age when many elected officials govern by sound bite, David Simmons is not afraid to immerse himself in the details of policy initiatives – his own as well as others that come before him in the Florida Senate.

“His detail-oriented approach to legislating resulted in his being entrusted with shepherding some of House and Senate leaderships most important priorities through the legislative process, most recently as Chair of the influential Judiciary Committee,” Bruce continued. “He will be retiring in 2020 due to term limits and, no doubt, his knowledge of the process along with relationships he is cultivated over nearly 20 years of service will be missed in the Central Florida legislative delegation.”

“It is incredibly important for people to treat each other with dignity and respect, and it’s certainly important to not let personalities get in the way of getting good legislation done,” Simmons said. “You can’t get to the policy if you can’t get past the personalities.”

In 2019, working under Senate President Bill Galvano, Simmons and other Republicans got plenty of major legislation done. Simmons was in the middle of debating and working through some of the most controversial and partisan bills, notably the education package that authorized state tax dollars going directly to private schools, the Amendment Four implementation bill that requires felons to pay all restitution before they can have voting rights restored, the ban on sanctuary cities, and others.

But the lawyer from Altamonte Springs argued that even the most controversial of the bills still also contained broad appeal with important provisions that many Democrats supported. He offered the education bill as an example: Yes, Republicans included the new scholarships to private schools, which many Democrats opposed. But they also included significant increases in funding for public schools and other measures Democrats espoused.

This is how Simmons has always seen lawmaking.

“Because we treated people with respect, in the vast majority of the legislation we passed we reached some common ground on,” Simmons contended.

For many years, Simmons was a rare Republican expressing strong commitments to environmental protection. That’s no longer the case. Though Democrats would argue they want more than the GOP, more and more Republicans are joining Simmons’ calls for more protection and more money, notably through the landmark 2016 water protection bill, more commitments to the Everglades, and other measures, and now with Gov. Ron DeSantis styling himself as an environmental Governor.

Simmons specialty and priority has been the protection of springs and groundwater, particularly through standards to would greatly reduce phosphates and nitrates. It’s protection seen as imperative to the restoration of the health of Florida’s springs, as well as something that would also address the environmental crises of the Everglades, and the red tides and algal bloom along the coasts. He wants to help that continue in 2020.

“We plan on working together with our local governments to solve this challenge, and we’re very close to doing it,” Simmons said. “And we want to expand that program to include all, not just where springs are as priority areas, but to make sure we are addressing all the surface water as well as the groundwater in the state. So I do plan to work with fellow senators to make sure we create a future we can all be proud of.