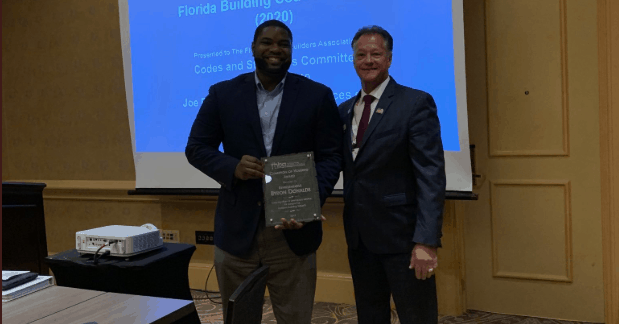 That’s the goal of the FHBA Champion of Housing award, according to the organization’s website. They select an appointee, or multiple, each year that must be someone within the state legislature who has committed to service that positively impacts the building industry in Florida.

In a news release the FHBA said of the men, they ”sponsored HB 207, the Impact Fee Reform bill. The bill codified a series of case law, which was often ignored by local governments.

“The bill requires that an impact fee must only be used to offset the actual impact of development and that the local government must specifically earmark funds collected under the impact fee for use in acquiring, constructing, or improving capital facilities to benefit new users.”

Gruters sponsored the legislation in the Senate, SB 144, also known as the Impact Fee Reform bill.

“Unnecessary costs further amplify the cost of homes when local governments collect permits in excess of what it costs to enforce the building codes. Thank you, Sen. Gruters, for working to keep the costs of homeownership as low as possible.”

Both men received the award at separate times during the Southeast Building Conference in Kissimmee, FL.

Gruters and Donalds are joining a long list of state officials who have been recognized for their positive service before them. Others who have received this award include:

For more information on the FHBA Champion of Housing award, visit the FHBA website.