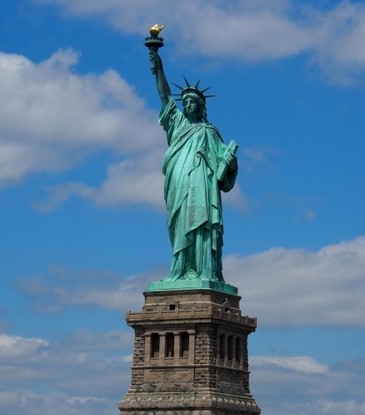 Forget the green card. Let's see your gold or platinum card. And how's your portfolio doing?

My astonishment threshold is high, but Ken Cuccinelli breached it with his crack about immigration. His rewrite of the iconic Statue of Liberty inscription has opponents spitting anger and #CuccinelliResign trending on Twitter.

Yeah, in Cuccinelli’s world, the words on Lady Liberty would read: “Give me your tired and your poor who can stand on their own two feet and who will not become a public charge.”

Hello, world, especially anyone from Europe! Do you want to come to America? Forget the green card. Let me see your gold or platinum card. By the way, how’s your portfolio doing?

Cuccinelli said the department is merely enforcing immigration law that has been on the books for decades. Sometimes it’s not what you say, though, but how you say it.

And this was a smug, snarky, immigrant-bashing taunt.

Cuccinelli is the acting Citizenship and Immigration Services Director. That’s because Senate Republicans won’t confirm him to be lead the agency that oversees the nation’s immigration policy. He assumed the acting position in June and can stay there for 210 days.

Let that sink in. This guy is too toxic for even members of the President’s core Senate supporters

Florida Sen. Marco Rubio is in that group. So is Senate Majority Leader Mitch McConnell.

But before we go there, let me throw this question out there to those who consider themselves part of President Donald Trump’s support base. Is this what you signed on for in 2016?

Oh, I know, many true believers will reflexively say yes. But I wonder how many Trump voters have had direct negative encounters with immigrants – undocumented or otherwise?

Here in this huge, beautiful melting pot we call Florida, an estimated 20 percent of the population are immigrants. Of those, about 850,000 are considered undocumented.

Before anyone says it, yes, some of them committed crimes. But I’m talking big picture.

Have you had a bad experience with any of them? Did they cause a riot somewhere that I missed?

Many studies have shown that our labor force depends on immigrants – legal and undocumented. They do the jobs you won’t. They are long-haul truckers, agricultural and construction workers, janitors, hotel maids, and so on.

That’s not a complete picture, of course. Some are in the medical field or other professional jobs.

But if you have eaten at a restaurant, stayed in a hotel, brought fruit or vegetables at a grocery store, or had work done at your house, you probably had contact with an undocumented immigrant.

Did the experience leave you scarred?

The Cato Institute, a Libertarian think tank, found that the conviction rate for undocumented immigrants in Texas is about half that of native-born Americans. And that’s in a state considered Ground Zero for the immigration battle.

So, back to Cuccinelli, the latest attack dog sent on a destruct mission by this administration.

How much damage can an acting department head do in 210 days?

Plenty, but maybe not the kind he intends.

While immigration will remain a scorching topic through 2020, a quote like Cuccinelli’s can give undecided voters a moment of pause. What kind of nation are we becoming? And what would be like after four more years of this rhetoric?

The Trump camp believes enough people will decide the President is trying to protect America and keep out the riff-raff. It’s a calculated gamble.

It’s not about draining the swamp anymore. Trump’s strategy is an appeal directly to scared white voters that their world is ending and immigrants are the reason why.

Unless those immigrants have money, of course.