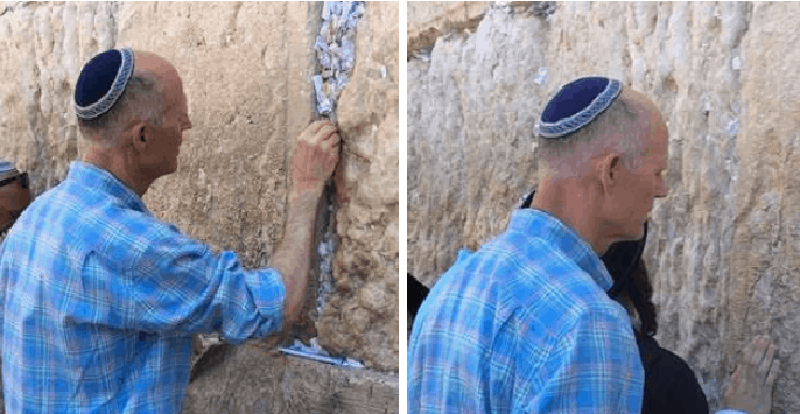 Is Scott out of step with Trump?

While Sen. Rick Scott was in Israel Tuesday, he continued a hallowed tradition of Florida Republicans — a pilgrimage to the Western Wall.

As was the case with Govs. Charlie Crist and Ron DeSantis, he inserted a prayer into one of the holiest sites in the world.

Unlike his predecessor and successor, the Governor-turned-Senator did not pray for hurricanes to avoid the peninsula.

Rather, the Naples Republican prayed for regime change in Venezuela, via an end to the Nicolas Maduro regime.

The Senator has been adamant in insisting the “genocidal” Maduro must go, even as regime change does not seem to be a White House priority.

In May, Scott urged allies at a summit in Colombia not to “blink” in the face of Maduro continuing to stay in office despite the election of Juan Guaido.

“Russia, China, Iran, Hezbollah and others will have a base for activity,” Scott said. “The presence of our enemies will eventually destabilize every country in the region.”

By June, appetite for action in Venezuela and D.C. dwindled further.

Polling showed that Venezuelans see Nicolás Maduro as the real President and that their preference was to remove him electorally. And Trump — wearied by then of the mechanics of regime change — did not get an “easy win” after all.

But in a speech to the Atlantic Council, Scott continued to press the case with urgency.

“We cannot take the possibility of using American military assets off the table,” Scott added, as potentially “the next thing we can do to get Maduro to step aside.”

However, the President may not be in Scott’s column. According to Fox News, Trump and Maduro have been negotiating via American intermediaries.

Meanwhile, despite the United States not recognizing Palestinian statehood, Scott issued (with no context attached) a statement contrasting Israel and Palestine.

“As I continue to travel to Israel, the contrast could not be more clear,” he said. “Israel is a vibrant democracy that supports capitalism, champions human rights and holds free and open elections.”

“Conversely, Palestine had their last election for president in 2005, refuses to hold open and free elections, and fails to champion human rights. The United States must always align with those fighting for freedom and democracy, and stand up against those that do not respect human rights,” the Senator added.

Scott’s comments are an interesting set-up for President Trump’s Israeli/Palestinian peace plan, set to be rolled out after Israeli elections next month.