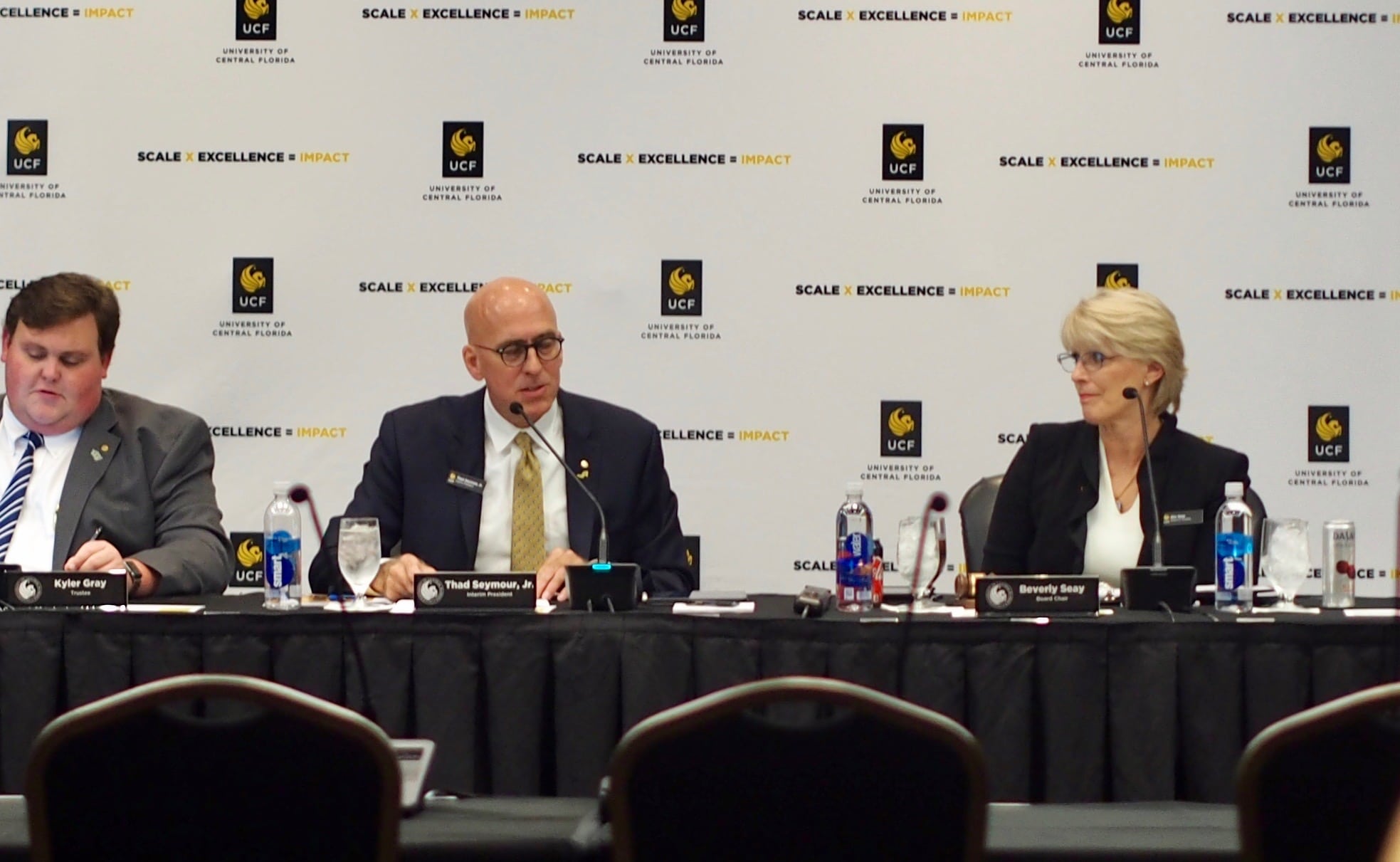 The University of Central Board of Trustees voted Thursday to restart its search efforts for a new president they hope will begin a new era after Interim President Thad Seymour, who has been cleaning up messes from the last era, said it’s time to move on without him.

Seymour, interim since February, thwarted a call by several trustees to keep him a good while longer and delay any more transition. He told them that he believes it is time for UCF to bring in a new leader and that he would not be a candidate.

The first observation dissuaded some trustees hopes that he would be willing to help them buy more time. The latter vow answered concerns raised from a consultant, and echoed by several board members Thursday, that if Seymour were considered a potential inside candiate, other, good, outside candidates might decide not to bother applying.

“I have given this a lot of thought. I have been asked almost daily about it. I really believe we are at the point… where we have to look ahead and we have to move forward,” Seymour said. “I completely agree with what you got from the consultants. I should not be a candidate for this search. I won’t be a candidate for this search. I think all of us ought to be thinking in terms of about: How do we put the best foot forward to attract the best possible pool of candidates for great leaders? And I think we can do that.”

His declaration averted what was bound to be a split and contentious vote on where UCF would go next. The university has spent the past eight months trying to shake off financial scandals that emerged last year, which dated to the last few years of the 26-year reign of John Hitt. It also tainted the presidency of his successor, Dale Whittaker, who was forced to resign last February after just eight months in office.

Those scandals began with an audit revelation that UCF had misappropriated $38 million to build the Trevor Colbourn Hall building. Deeper looks found more. In addition to Whitaker’s resignation, the board also accepted resignations from its Chair Marcos Marchena and UCF’s chief financial officer Bill Merck, and several people were fired from the next level of the administration.

After Seymour agreed to be the interim president, UCF initially began its presidential search in March, while he took on the task of reestablishing UCF’s credibility with the Florida Legislature and the Board of Governors.

But in July, with concerns that the financial scandals still weren’t completely off the university’s shoulders, the board suspended that search indefinitely. The concern was: who wanted to come to a university that might still be on fire?

Indeed, Trustee William Yeargin advised the board Thursday that consultants he spoke with said candidates would be very concerned about the prospect that there could be “a high level of involvement by the Legislature and the Board of Governors in this process.”

In fact, when UCF suspended the search in July, the Florida Board of Governors still was investigating matters. In August the Board of Governors released a blistering investigative report detailing almost $100 million in misappropriations under Hitt, including some during Whittaker’s tenure as UCF provost and executive vice president.

On Thursday, several trustees, notably Robert Garvey and Ken Bradley, expressed that they liked the job Seymour was doing; that they didn’t think it was a good time to launch another search; and they would just as soon delay another year or two to make sure everything was cleared, and maybe even remove his interim title during that period.

However, others, notably Board Chair Beverly Seay pushed to start the search immediately. Seay said she had given the Board of Governors her commitment that the UCF Board of Trustees would do so.

“The Board of Governors did not give us direction. I would say it was we who gave a commitment that we would move forward,” Seay told the board.

It was a statement that rankled at least one board member who wondered when the board had authorized her to give such a commitment.

“I believe that until we move on with this, no one will believe that we are finished with the problems that we’ve been living under for the past year,” she continued. “And as we do this search, as Trustee [Joseph] Conte pointed out, we do have flexibility. I enjoy working with Thad. He is great to work with. I think we’re doing very well together.

“This search will yield a candidate that will likely start at the beginning of the next fiscal year. We have another ten months, nine, ten months, to work with President Seymour,” she said.

The vote to move forward was unanimous.

The university stated after the meeting that the goal will be to have the new president in office by next summer. The presidential search will be led by a search committee that will be established by the Board of Trustees. The committee will include representatives from faculty, staff, students and the community.