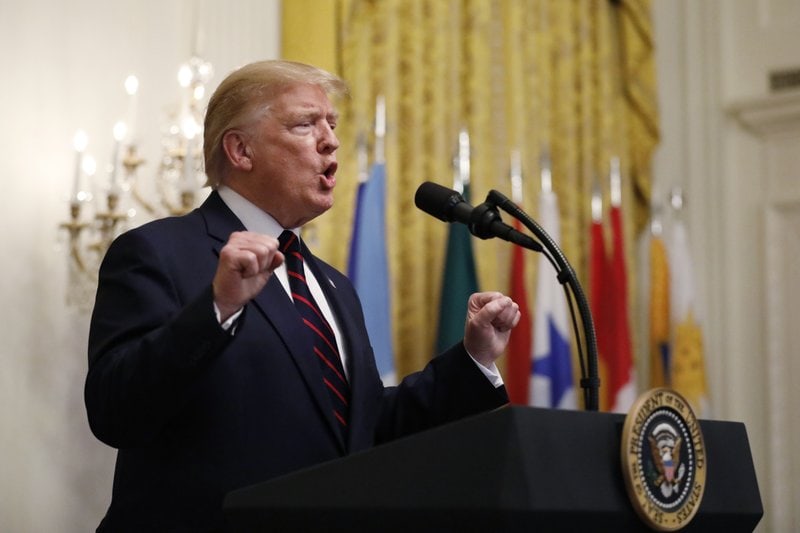 Republicans were straining under the uncertainty.

At the end of a stormy week of revelation and recrimination, House Speaker Nancy Pelosi framed the impeachment inquiry as a somber moment for a divided nation.

“This is no cause for any joy,” she said on MSNBC.

At the White House, a senior administration official confirmed Friday a key detail from the unidentified CIA whistleblower who has accused Trump of abusing the power of his office. Trump, for his part, insisted anew that his actions and words have been “perfect” and the whistleblower’s complaint might well be the work of “a partisan operative.”

The White House acknowledged that a record of the Trump phone call that is now at the center of the impeachment inquiry had been sealed away in a highly classified system at the direction of Trump’s National Security Council lawyers.

Separately, Trump adviser Kellyanne Conway told reporters that the whistleblower “has protection under the law,” something Trump himself had appeared to question earlier in the day. He suggested then that his accuser “isn’t a whistleblower at all.”

Still at issue is why the rough transcript of Trump’s July 25 phone call with Ukraine’s president was put on “lock down,” in the words of the whistleblower. The CIA officer said that diverting the record in an unusual way was evidence that “White House officials understood the gravity of what had transpired” in the conversation.

The whistleblower complaint alleges that Trump used his office to “solicit interference from a foreign country” to help himself in next year’s U.S. election. In the phone call, days after ordering a freeze to some military assistance for Ukraine, Trump prodded new Ukrainian President Volodymyr Zelenskiy to dig for potentially damaging material on Democratic rival Joe Biden and volunteered the assistance of both his personal attorney, Rudy Giuliani, and U.S. Attorney General William Barr.

Pelosi refused to set a deadline for the probe but promised to act “expeditiously.” The House intelligence committee could draw members back to Washington next week.

At the White House, it was a senior administration official who acknowledged that the rough transcript of Trump’s conversation with Ukraine’s Zelenskiy had been moved to a highly classified system maintained by the National Security Council. The official was granted anonymity Friday to discuss sensitive matters.

White House attorneys had been made aware of concerns about Trump’s comments on the call even before the whistleblower sent his allegations to the intelligence community’s inspector general. Those allegations, made in mid-August, were released Thursday under heavy pressure from House Democrats.

One former official said memos of Trump calls with foreign leaders had to be severely restricted after leaks in 2017. Calls with Saudi Arabia’s Crown Prince Mohammed bin Salman and Russia’s Vladimir Putin were among those whose distribution were kept to a minimum. The official cautioned that administrations discuss sensitive matters with both nations, and that the treatment shouldn’t imply anything untoward on the call. Even some calls with US allies are also restricted due to discussions of classified topics. The person spoke on the condition of anonymity to describe the process.

On the Ukraine matter, Trump was keeping up his full-bore attack on the whistleblower and the unnamed “White House officials” cited in the complaint, drawing a warning from Pelosi against retaliation.

Late Thursday, Trump denounced people who might have talked to the whistleblower as “close to a spy” and suggested they engaged in treason, an act punishable by death. Then on Friday, he said the person was “sounding more and more like the so-called Whistleblower isn’t a Whistleblower at all.”

He also alleged without evidence that information in the complaint has been “proved to be so inaccurate.”

Pelosi told MSNBC, “I’m concerned about some of the president’s comments about the whistleblower.”

She said the House panels conducting the impeachment probe will make sure there’s no retaliation against people who provided information in the case. On Thursday, House Democratic chairmen called Trump’s comments “witness intimidation” and suggested efforts by him to interfere with the potential witness could be unlawful.

Trump’s Friday comment questioning the whistleblower’s status seemed to foreshadow a possible effort to argue that legal protection laws don’t apply to the person, opening a new front in the president’s defense, but Conway’s statement seemed to make that less likely.

The intelligence community’s inspector general found the whistleblower’s complaint “credible” despite finding indications of the person’s support for a different political candidate.

Legal experts said that by following proper procedures and filing a complaint with the government rather than disclosing the information to the media, the person is without question regarded as a whistleblower entitled to protections against being fired or criminally prosecuted.

“This person clearly followed the exact path he was supposed to follow,” said Debra D’Agostino, a lawyer who represents whistleblowers. “There is no basis for not calling this person a whistleblower.”

Lawyers say it also doesn’t matter for the purposes of being treated as a whistleblower if all of the allegations are borne out as entirely true, or even if political motives or partisanship did factor into the decision to come forward.

Giuliani, already in the spotlight, was scheduled to appear at a Kremlin-backed conference in Armenia on Tuesday, but he said Friday he would not be attending. The agenda showed him speaking at a session on digital financial technologies. Russian President Vladimir Putin also was scheduled to participate in the conference.

Republicans were straining under the uncertainty of being swept up in the most serious test yet of their alliance with the Trump White House.

“We owe people to take it seriously,” said Sen. Marco Rubio, a onetime Trump rival who is now a member of the intelligence committee.

“Right now, I have more questions than answers,” he said. “The complaint raises serious allegations, and we need to determine whether they’re credible or not.”

A swift resolution to the impeachment inquiry may not be easy. The intelligence committee is diving in just as lawmakers leave Washington for a two-week recess, with the panel expected to work while away. One person familiar with the committee’s schedule said that members might return at the end of next week.

Findings will eventually need to be turned over to Rep. Jerrold Nadler’s Judiciary Committee, which is compiling the work of five other panels into what is expected to be articles of impeachment. The panel will need to find consensus.

Meanwhile, Trump’s reelection campaign took to accusing Democrats of trying to “steal” the 2020 election in a new ad airing in a $10 million television and digital buy next week.

The ad also attacks Democrat Biden, highlighting his efforts as vice president to make U.S. aid to Ukraine contingent on that country firing a prosecutor believed to be corrupt. The ad claims that the fired prosecutor was investigating the former vice president’s son.

In fact, the prosecutor had failed to pursue any major anti-corruption investigations, leaving Ukraine’s international donors deeply frustrated. In pressing for the prosecutor’s ouster, Biden was representing the official position of the U.S. government, which was shared by other Western allies and many in Ukraine.

Pelosi said she was praying for the president, adding, “I would say to Democrats and Republicans: We have to put country before party.”

nextJeb Bush pines for the days of civility