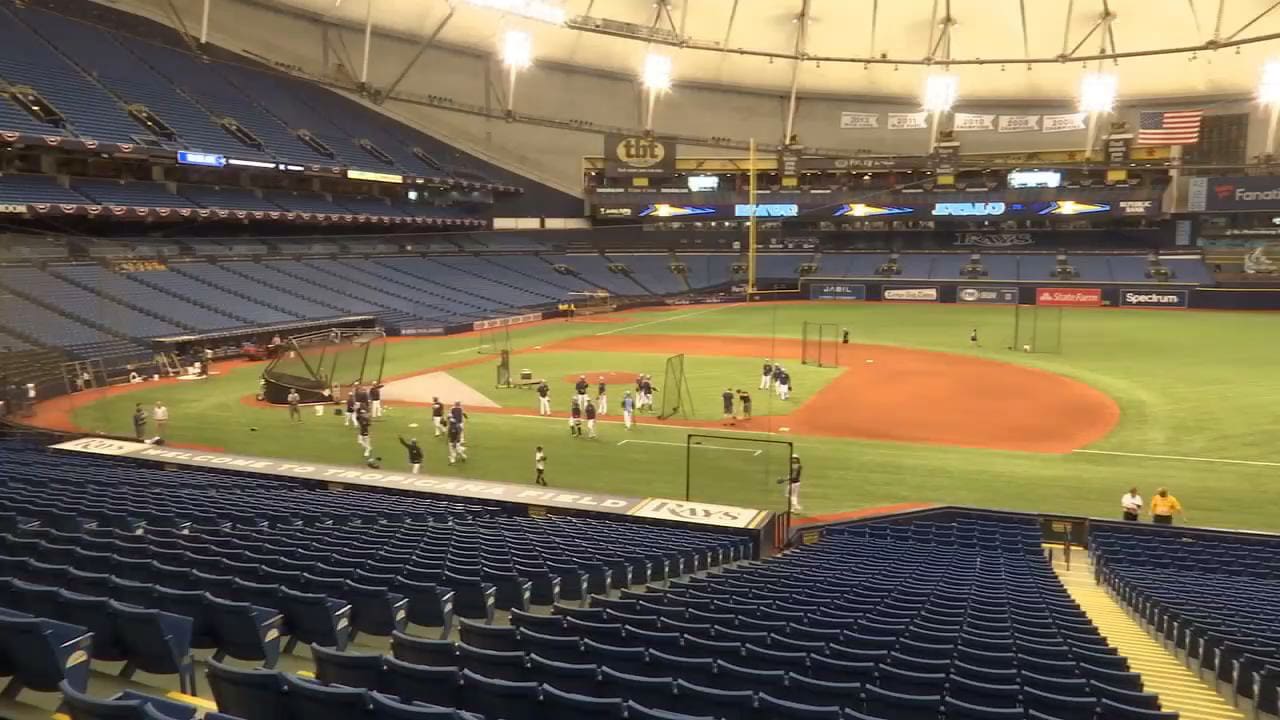 The Rays finished with the lowest home attendance in the American League for the fifth consecutive year.

The Tampa Bay Rays finished the 2019 regular season with the second-lowest home attendance in MLB for the second consecutive year.

An average of about 14,552 fans per game attended the team’s 81 home games at Tropicana Field this season, according to Baseball Reference. Tropicana Field has a capacity of 25,025 fans.

Tampa Bay had a total home attendance of 1,178,735 fans during the 2019 regular season, according to Baseball Reference.

Tropicana Field had three sellout crowds this season: March 28 on Opening Day against the Detroit Tigers, May 11 against the New York Yankees and May 12 against the Yankees.

The Trop’s season-low for fan attendance came May 28 against the Toronto Blue Jays. There was an announced attendance of 5,786 fans for the game. The Miami Marlins had baseball’s lowest single-game attendance this season with 5,297 fans attend the Aug. 26 game against the Cincinnati Reds.

Before the start of the season, Tropicana Field got rid of the upper-level seats, which reduced the capacity from 31,042 fans. Tropicana Field also became the first cash-free sports venue in North America this season.

While attendance at Tropicana Field has long been a topic of discussion throughout the Tampa Bay area, it’s worth noting the Rays make most of their money through the television rights to broadcast their games. The team is in the first year of a 15-year television contract with Fox Sports Sun. The contract is worth about $1.23 billion in total, according to Sports Business Daily. The Rays make an average of about $82 million per year on the deal.

The Rays are committed to their lease at Tropicana Field through the 2027 season. However, Rays management said in June the team will explore the possibility of splitting the 81-game home schedule between the Tampa Bay area and Montreal.

Rays owner Stuart Sternberg and President Brian Auld have met with St. Petersburg Mayor Rick Kriseman at least twice about the team’s future, according to the Tampa Bay Times.

I wrote for WTSP in June about the logistical challenges the Rays would have splitting a season between two cities. It includes getting permission from the city of St. Petersburg to explore other cities, financing two stadiums and getting the MLB Players Association to agree.

In December 2018, the Rays terminated its negotiating window with the city of Tampa to build an $892 million stadium in Ybor City.

For the second straight year, the Miami Marlins finished last in MLB in home attendance. The Marlins had 811,302 fans go through the turnstiles at Marlins Park and an average of 10,016 fans per game. The stadium — which was built ahead of the 2012 season — has a capacity of 36,742 fans.

The Atlanta Braves — the team with the newest stadium in baseball — finished with the 12th highest home attendance in baseball this season as of Sunday night. The Braves had 2,654,920 total fans and about 32,777 fans per game. SunTrust Park was built ahead of the 2017 season and has a capacity of 41,000 fans.

The Rays could play the Yankees in the postseason. The teams wouldn’t play until the AL Championship Series.

Tampa Bay made the playoffs for the first time since 2013. The AL Wild Card Game against the Oakland A’s is set for 8:09 p.m. ET Wednesday at the Coliseum in Oakland. The winner plays the Houston Astros in the AL Division Series.

If the Rays advance, the team will reopen the upper deck at Tropicana Field for postseason games. If the Rays beat the A’s, Tropicana Field would host a playoff game Oct. 7 for Game 3 of the ALDS. The ALDS is the best of five games.

Mark Bergin is a freelance journalist. He’s worked as a writer for 10News WTSP in St. Petersburg and WBIR 10News in Knoxville, Tennessee. Bergin has covered the Tampa Bay Rays’ stadium negotiations, the 2018 midterm elections, Tampa Bay’s transportation issues and city/county government. You can follow his work on Facebook, Twitter, YouTube and Instagram. Reach him by email at [email protected].

nextSt. Pete to take next step in launching e-scooter program