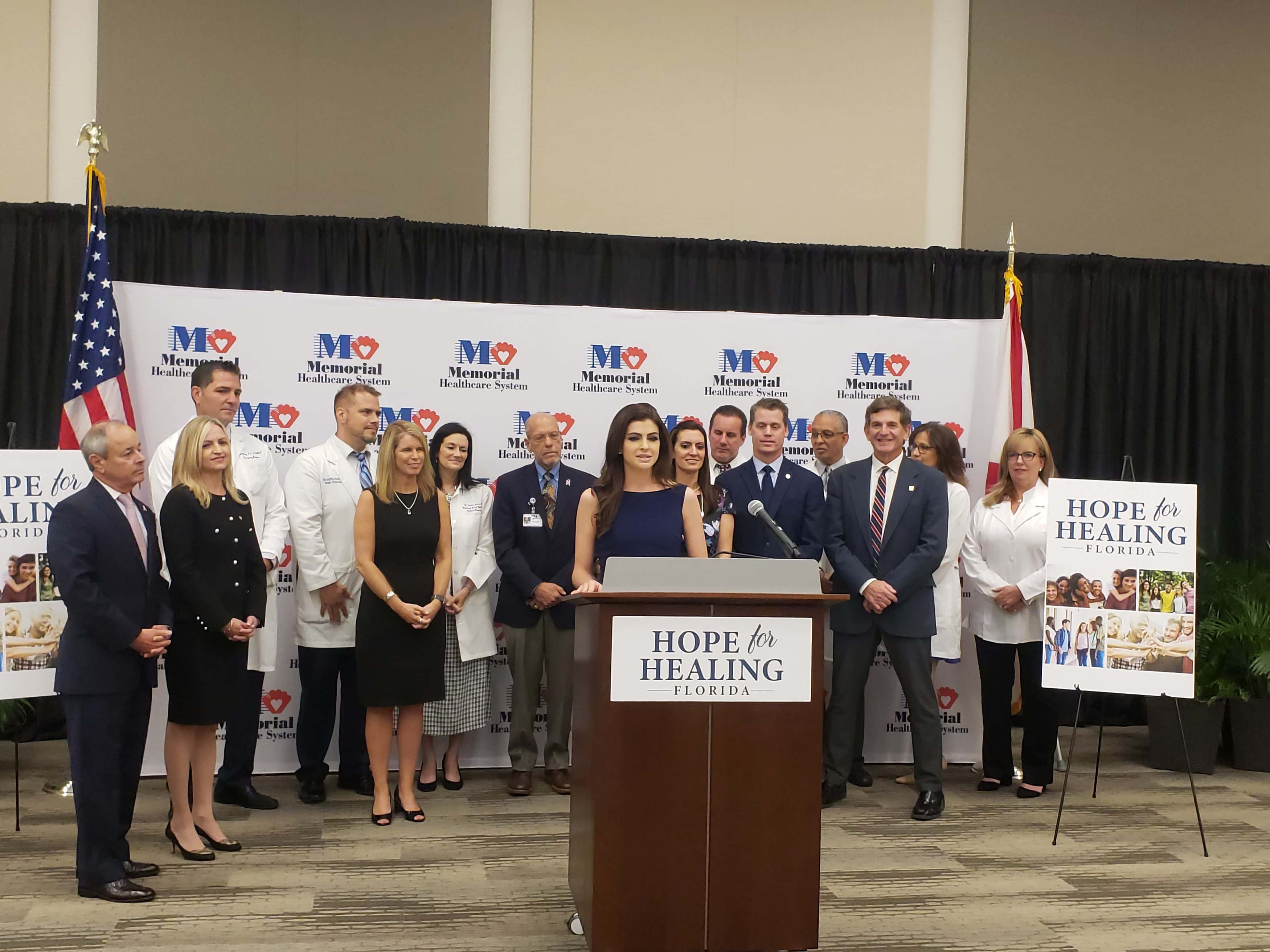 DeSantis made the announcement at Memorial Regional Hospital in Hollywood.

First Lady Casey DeSantis visited Broward County on Wednesday to announce the creation of a new state position aimed at helping pregnant women who are addicted to opioids.

DeSantis also says the state will receive a $58.8 million federal grant to help deal with the opioid problem.

DeSantis made the announcement at Memorial Regional Hospital in Hollywood. She was joined by Lt. Gov. Jeanette Núñez, Surgeon General Scott Rivkees and other state officials. They toured the facility, which included visiting two newborn children suffering from what’s known as “neonatal abstinence syndrome” (NAS). NAS occurs when a newborn is withdrawing from drugs he or she is exposed to inside the womb.

“As a mother of two children and now pregnant with our third, this really does hit home for me,” DeSantis said. “Instead of innocent cries, babies born addicted shriek in high-pitched scream of pain.

“They endure seizures as their muscles flex uncontrollably. They deal with fever, diarrhea, difficulty breathing. They can’t be soothed. They have trouble eating. They can’t sleep. They’re in pain as they endure the cruelty of going through withdrawal.”

DeSantis said a new Neonatal Abstinence Syndrome Statewide Prevention Coordinator will be created within the Department of Health to help address the issue.

“That person will coordinate and enhance resources and services for pregnant women, mothers and newborns who are addicted to opioids,” DeSantis said.

In addition, the state is receiving a $58.8 million dollar federal grant to enhance the tracking of and response to opioid abuse.

“This new three-year overdose data-to-action grant from the Centers for Disease Control and Prevention will provide really critical staffing and funding to collect and analyze and derive key information to real-time life-saving services and resources.”

That’s in addition to a separate $26 million grant awarded in April for the state’s Opioid Response Project.

“We have a serious opioid crisis in this state,” Rivkees added. “Last year, 4,200 individuals lost their lives to opioids. And also, there were 1,500 children who were born with neonatal abstinence syndrome, which the First Lady spoke about. This is a serious condition.”

Caitlin Beck Stella, who serves as CEO for the Joe DiMaggio Children’s Hospital, added to the urgency with her own statements Wednesday.

“We have reached a public health crisis in this country,” Stella said. “Stories of parents and children struggling are becoming the norm.”

Stella cited the hospitals’ maternal addiction program, which aims to help mothers withdraw from drug use while pregnant.

“We’ve treated about 130 moms and 92 percent of their babies have been born drug-free,” Stella said.

It’s those types of programs that DeSantis, who started Hope for Healing Florida to coordinate action on health issues at the state level, is looking to promote.

Rivkees says the federal money will go toward solving issues such as finding out which medications people are overdosing on, researching programs to link the health community to people who are addicted and in need, and other areas.

Núñez noted the importance of aiding addicted moms, saying she has heard the need for help in conversations across the state.

“Over the past 10 months, I’ve had the opportunity to visit with over two dozen county health departments, including the one here in Broward County,” Núñez said. “And I will tell you that this issue comes up time and time again.”