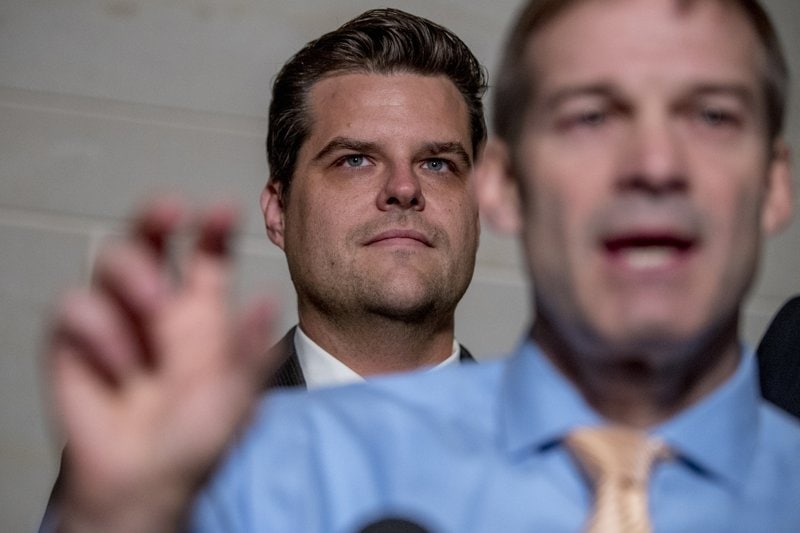 Gaetz’s blunt candor has endeared him to voters in his district.

Long before Republican U.S. Rep. Matt Gaetz was calling the chairman of the House Intelligence Committee “Captain Kangaroo,” he built a reputation as an agitator who wasn’t shy about calling out other lawmakers on social media or with reporters.

During a news conference Tuesday, Gaetz mocked U.S. Rep. Adam Schiff, a Democrat from California who is leading the impeachment probe into President Donald Trump’s conversation with Ukraine about political rival Joe Biden.

“What we see in this impeachment is a kangaroo court, and Chairman Schiff is acting like a malicious Captain Kangaroo,” Gaetz said, referring to the beloved children’s television character who first went on air 27 years before Gaetz was born.

Gaetz, 37, is only in his third year in Congress, yet he has already become nationally recognized as one of Trump’s most ardent defenders. He’s a frequent guest on cable news stations and has appeared with the president several times. While his style works in his Florida Panhandle district, one of the state’s most conservative, liberal Democrats love to hate him — and he seems to revel in the criticism.

“He knows exactly what he’s doing,” said Democratic state Rep. Evan Jenne, who was often on the opposite side of Gaetz in Florida. “How many other sophomore congressmen are getting consistent phone calls from the White House? … Any third-year congressperson would have to be envious of the amount of influence he has on the national stage in such a short period of time. And let’s be honest, he’s obtained this, in part, because of saying stuff that sounds a little bit kooky.”

Jenne called the Captain Kangaroo comment tame compared to some of what he’s heard Gaetz say in the decade he’s known him. But Jenne also called Gaetz a friend, someone he greets with a hug and with whom he has worked closely on environmental and other issues.

“Matt is a highly intelligent individual. If anyone thinks that’s not the case, you’re doing yourself a disservice because he’s going to run over you if you’re not prepared to debate with the guy,” Jenne said. “Matt loves, loves, loves a good political fistfight. He loves it.”

On Tuesday night, Gaetz spoke at a political event in Niceville for a local school superintendent candidate. He looked like a star in his district as he slowly moved through the crowd. As supporters made their way toward him, one man said: “He’s like the president. You can’t get to him.”

Gaetz barely made it to the event on time after he was forced to change his flight when Trump called him to the White House that morning.

Gaetz later told The Associated Press that he and Trump talked about Syria. That same day, Trump announced he was withdrawing troops from northeastern Syria — a decision Gaetz supports.

“I am incredibly grateful that this is the first president since Ronald Reagan to not start a new war. My generation is weary of these endless wars. We have been trading the same villages back and forth in Afghanistan for 18 years,” Gaetz said. “I think about what the global picture would look like if Donald Trump had not won. If you had a President Hillary Clinton, Jeb Bush, John Kasich, we’d probably be at war with two out of the four: Syria, Venezuela, Iran, North Korea.”

While true to many core Republican values, Gaetz also works with Democrats both on environmental matters — he and Democratic U.S. Rep. Scott Peters of California are co-sponsoring a bill to reduce climate pollutants — and issues such as medical marijuana.

“I come from the pro-science wing of the Republican Party. I understand that the Earth is warming, that medical marijuana can help people live better lives and no one chooses to be gay. I can’t believe that any of those things are still issues of debate among any group of intelligent adults,” Gaetz said. “As we see more young people enter the Congress, we start to see more issues divide us generationally rather than just by party affiliation.”

Like Trump, one of Gaetz’s favorite tools is Twitter. His Twitter profile includes a quote from Trump describing Gaetz: ”‘He’s a machine … handsome and going places’ says @realDonaldTrump.”

In February, Gaetz attacked Trump lawyer Michael Cohen prior to his testimony before a House committee, tweeting, “Hey @MichaelCohen212 – Do your wife &amp; father-in-law know about your girlfriends? Maybe tonight would be a good time for that chat. I wonder if she’ll remain faithful when you’re in prison. She’s about to learn a lot…”

When the tweet was perceived as a threat, he deleted it and apologized — sort of. Before getting to, “I’m sorry,” Gaetz tweeted, “it is important 2 create context around the testimony of liars like Michael Cohen.”

While in the Florida House, Gaetz made headlines in 2015 for questioning the intelligence of two black lawmakers. Some said the tweet was racist, and Republicans and Democrats alike condemned it. The Republican House Speaker at the time, Steve Crisafulli, apologized for the remark, but also defended Gaetz. “He is an agitator, yes, but not a racist,” Crisafulli tweeted.

Former state Sen. Arthenia Joyner, one of the black lawmakers, said Gaetz hasn’t changed. “He’s just an attack dog who can’t help himself, because he’s privileged and was born with a silver foot in his mouth,” Joyner said.

But Gaetz’s blunt candor has endeared him to voters in his district. He won reelection last year with 67 percent of the vote.

“What’s refreshing is hearing the truth,” said Jim Heald, a 66-year-old retired Air Force officer and a registered Democrat. “What I don’t like is when someone is deceiving me, and Matt’s telling the truth. I’m a big supporter.”

nextFlorida lawmaker wants you to have a 'healthy marriage'