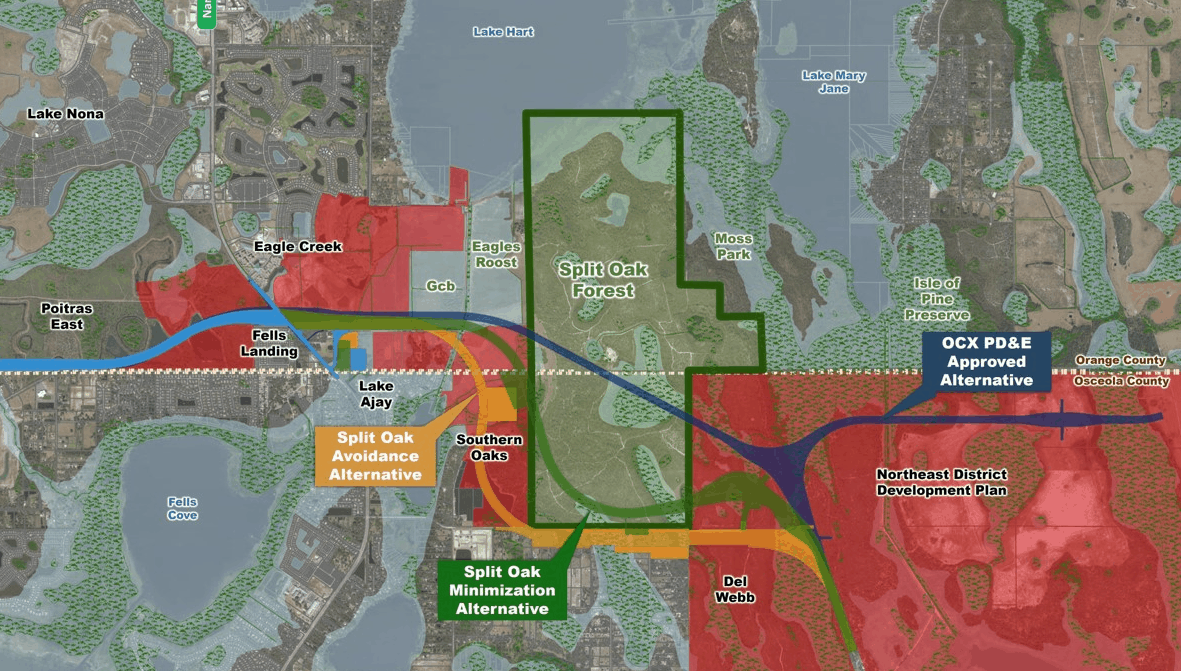 The long-awaited study recommending a path for the proposed Osceola Parkway extension will be unveiled this week, bringing more focus to what may happen to the Split Oak park, existing neighborhoods in southern Orange and northern Osceola counties, major developments in the region, and longterm transportation connectivity from there to Brevard County and the Space Coast.

The study should show the preferred route for that highway to be pushed through the region of Lake Nona, Split Oak and communities in between.

The region is along, just north of, and just south of the county line between Orange and Osceola counties and would affect both counties, in an area that is on the verge of booming with thousands of acres development.

The key point of contention in the route being unveiled this week is a matter of intense controversy. A short stretch of the Osceola Parkway extension would have to either plow through existing neighborhoods and already planned developments southeast of Lake Nona or through the Split Oak Forest Wildlife and Environmental Area, a conservation preserve that has intense defenders.

The study also will reveal the preferred route for a connector, west of Split Oak, from Osceola Parkway to State Road 417 and to the Orlando International Airport, with possible routes either west of Lake Nona near Boggy Creek, or through the Lake Nona development itself.

But the the most interest will be in the Split Oak recommendation. Three options have been proposed: one through existing developments, requiring eminent domain and destruction of numerous homes, and then south of Split Oak; one through just about the middle of Split Oak; and one through the southern 160 acres of the 2,000-acre preserve.

In efforts to work with conservationists, a key developer in the region, the Tavistock Development Co., has offered to donate 1,550 additional acres of natural forests and wetlands to the cluster of parks and preserves in the area. That is contingent on the selected route being the one through the southern 160 acres of Split Oak, a route considered to be a far less disruptive alternative to the proposal going straight through the park, and far less destruction of existing developments than the one that avoids the park altogether.

The Audubon Florida‘s Central Florida Policy Office has endorsed that proposal, praising the buffers it would create around Split Oak Forest, Moss Park, and the Isle of Pine Preserve. But others, most notably Friends of Split Oak Forest, remain strongly opposed, arguing that Split Oak is a unique preserve in Central Florida and should remain unspoiled by a highway, even one cutting through the less-pristine southern end.

Tavistock is developing both Lake Nona and a large, new development to the east, Sunbridge, which would be served by the Osceola Parkway extension.