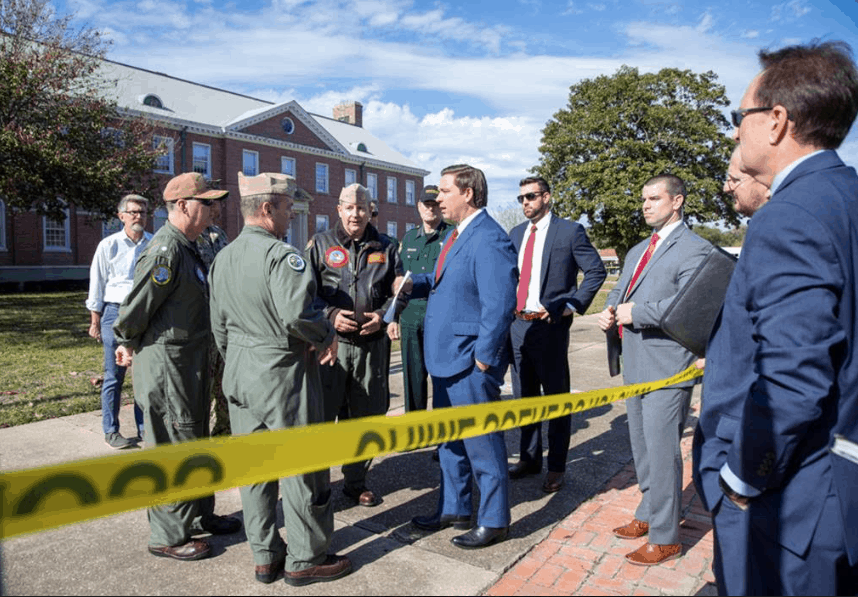 An aviation student from Saudi Arabia opened fire in a classroom at the Naval Air Station Pensacola on Friday morning, an attack that left three dead in addition to the assailant.

The assault, which left eight others injured, was the second at a U.S. Navy base this week and prompted a massive law enforcement response and base lockdown.

Twelve people were hurt in the attack, including two sheriff’s deputies who were the first to respond, one of whom killed the shooter, Escambia County Sheriff David Morgan said. One of the deputies was shot in the arm and the other in the knee, and both were expected to recover, he said.

Gov. Ron DeSantis confirmed at a news conference that the shooter was a member of the Saudi military who was in aviation training at the base.

The Governor pledged state resources ranging from the Florida Department of Law Enforcement to mental health counselors and a health care crisis team to  back up the sheriff’s office, Escambia County, the Navy, and the FBI.

“Today’s shooting not only strikes at the heart of Northwest Florida, but for the Navy nationwide and around the world. The response we saw from the deputies at Escambia County Sheriff’s office and active personnel responding to the scene is commendable and lives were saved because of the bravery of those wearing the uniform of the U.S. Navy and our local law enforcement, including from those who were wounded and still worked to help others. Their bravery will not be in vain,” DeSantis said in a news conference.

The shooter was identified as Mohammed Saeed Alshamrani, a member of the Saudi military, a U.S. official told The Associated Press. The official wasn’t authorized to discuss the matter publicly and spoke to the AP on condition of anonymity.

Earlier Friday, two U.S. officials identified the student as a second lieutenant in the Saudi Air Force, and said authorities were investigating whether the attack was terrorism-related. They spoke on condition of anonymity to disclose information that had not yet been made public.

“We have learned that the shooter was a foreign national in the employ of a foreign service and the government of Saudi Arabia needs to make things better for the victims and they’re going to owe a debt here,” DeSantis added.

Base commander Capt. Tim Kinsella confirmed at a news conference that the shooter was an aviation trainee at the base. He would not comment on his nationality or possible links to terrorism.

All of the shooting took place in one classroom and the shooter used a handgun, authorities said. Kinsella noted that weapons are not allowed on the base. The base remained closed until further notice and those still there would be evacuated when authorities decided it was safe to do so, Kinsella said.

President Donald Trump declined to say whether the shooting was terrorism-related.

Saudi state media did not immediately report on the shooting. The kingdom has relied on the U.S. to train its military.

“Obviously, the government of Saudi Arabia needs to make things better for these victims,” DeSantis said. “I think they’re going to owe a debt here, given that this was one of their individuals.”

President Trump tweeted his condolences to the families of the victims and noted that he had received a phone call from Saudi King Salman. He said the king told him that “the Saudi people are greatly angered by the barbaric actions of the shooter, and that this person in no way shape or form represents the feelings of the Saudi people who love the American people.”

One of the Navy’s most historic and storied bases, Naval Air Station sprawls along the waterfront southwest of downtown Pensacola and dominates the economy of the surrounding area.

Part of the Pensacola base resembles a college campus, with buildings where 60,000 members of the Navy, Marines, Air Force and Coast Guard receive training each year in multiple fields of aviation. The base’s training program includes a couple hundred from countries outside the U.S., Kinsella said.

The base is home is home to the Blue Angels flight demonstration team, and includes the National Naval Aviation Museum, a popular regional tourist attraction.

Lucy Samford, 31, said her husband, a Navy reservist and civilian worker on the base, was about 500 yards from where the shooting happened. She said she got a call from him a little after 7 a.m. and “one of the first things out of his mouth was, ‘I love you. Tell the kids I love them. I just want you to know there’s an active shooter on base.’”

Her husband, whom she declined to identify, later told her he was OK.

Escambia County Commissioner Jeff Bergosh, who works at the Naval Air Station as a civilian contractor, told the Pensacola News Journal he was in line to go through the gate Friday morning when it was shut down due to the active shooter report.

“There’s probably been 100 or so various law enforcement vehicles zooming down the wrong side on Navy Boulevard,” Bergosh told the newspaper. “There’s been ambulances, fire trucks. It’s my understanding there’s multiple causalities.

The shooting is the second at a U.S. naval base this week. A sailor whose submarine was docked at Pearl Harbor, Hawaii, opened fire on three civilian employees Wednesday, killing two before taking his own life.

The Florida Politics staff and the News Service of Florida contributed to this post.