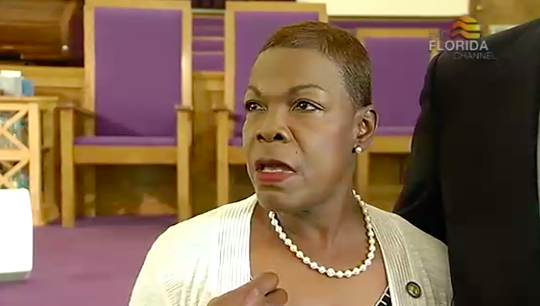 “Our new decade has a slim chance for a fresh, bolder start because talking a good game but never putting much effort in moving the ball toward the goal line is not a win for Floridians,” Gibson said.

McGhee, of Cutler Bay, said this millennium has not brought the protections Floridians need.

“Since 2000, our budget has nearly doubled from $50 billion to over $90 billion, and you’re correctly wondering where all this money has gone when there still exist struggling schools, low wages, a threatened environment and no pathway upwards,” McGhee said.

“All of these are our priorities as Democrats,” Gibson said. “They should be the Governor’s, too.”

“They know the Governor is leaving half of their colleagues out of proposed salary increases even though they’ve worked arm in arm, committed to educating our children, despite years without any additional salary consideration,” Gibson said.

On prescription drug costs, she said the Governor’s Canadian drug importation plan will bring some savings for the state government through Medicaid and the Department of Corrections, but that it’s not enough.

“The cost of prescription drugs continues to soar, but the best the Governor has offered over the past year is a plan to import drugs from Canada,” Gibson said.

Gibson also blasted DeSantis on Amendment 4 implementation. She said ex-felons in Florida expected to start the new decade with the restoration of voting rights.

“But since Amendment 4’s passage, the Governor has done everything in his power to undo the people’s will,” Gibson said. “And nothing in his speech today gave us any hope that he was going to change, and honor his commitment to uphold the constitution.”