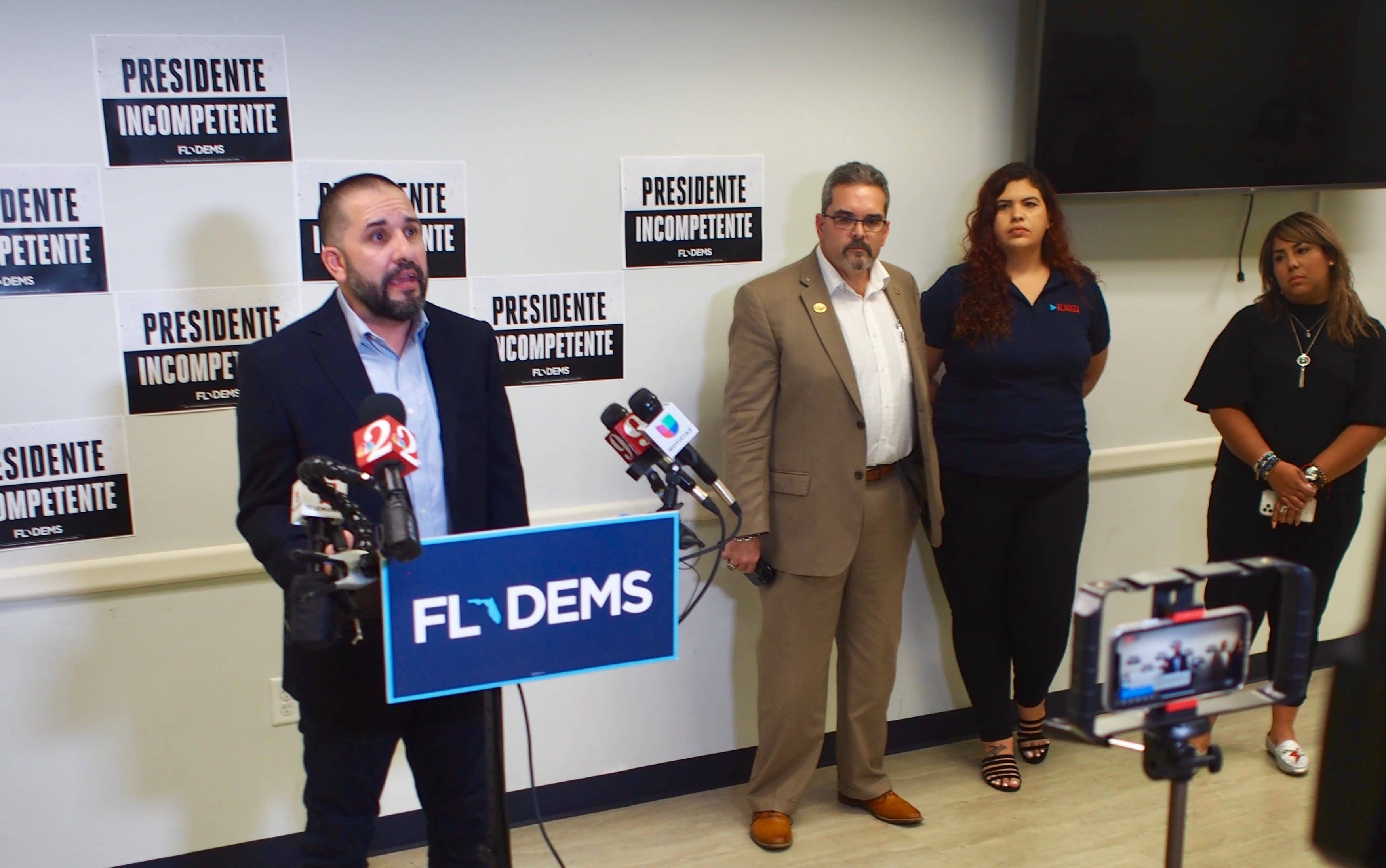 The Florida Democratic Party took its shots Wednesday in Kissimmee at President Donald Trump‘s record toward serving Hispanics in Florida, accusing him of everything from actively working against residents of Puerto Rico to fostering a culture of hatred toward Latinos everywhere.

The preemptive attack from Florida Democratic Party Executive Director Juan Peñalosa, Kissimmee Mayor Jose Alvarez and allies came the day before Vice President Mike Pence is set to address a rally called “Latinos For Trump” in Osceola County, a few miles from where the Democrats held their “Latinos Against Trump” press conference.

“We will never forget how they [Trump and Pence] turned their backs on the Hispanic community,” Peñalosa said.

The Democrats took their shots at Trump over his response to Hurricane Maria’s 2017 wallop of Puerto Rico, for which the Trump administration released just Wednesday $8 billion of the $41 billion in aid that Congress had appropriated in 2018; for immigration policies that Alvarez said attack “brown-skinned immigrants, immigrants like me, who came to this country over 47 years ago;”  and for separating children immigrants from parents and locking them up.

They also posted a billboard on Florida’s Turnpike, for traffic heading toward Kissimmee from Orlando, that depicts Trump tossing a roll of paper towels to a room full of desperate Hurricane Maria survivors. That image has come to symbolize critics’ allegation that the Trump administration’s responses to Puerto Rico plights, now including earthquakes this month, have ranged from intentional neglect to hostility.

Pence is expected to counter Thursday night at the Nación de Fe church, located just outside the Kissimmee city limits, that the Trump administration’s economic policies have led to the lowest unemployment rates in history for Latino workers; that Trump’s deregulation efforts have helped the large number of Latino-owned small businesses; and that the Republican Party’s more conservative social views on issues ranging from abortion to gay rights are more in line with evangelical Christian values shared by many Latinos.

Peñalosa, Alvarez, and other speakers, Chrstina Robinson of Alianza for Progress and Krizia Ivelisse Lopez Arce of Respeta Mi Gente Coalition argued that there may be more jobs, but wages are so low many Latinos have to have two or three of them. Peñalosa contended that Trump’s policies and statements go against his Christian teachings.

Peñalosa said Pence’s visit to Kissimmee is a “logistic decision” by the Trump campaign because more than 53% of the population is Hispanic.

“They try to lie to us. They try to take our vote. What I tell my constituents is, ‘Stop. Look what he’s done for us. Are our lives better now or before Donald Trump? ‘And it is worse.,” Alvarez said. “Not only that, but he continues to attack the rights of women and the rights of the LGBTQ community. He continues to attack the Affordable Care Act.

Polls have shown Trump polling in the range of 35% to 40% among Florida’s Latino voters, likely higher in Cuban-America communities and lower in Puerto Rican communities like those that dominate the Kissimmee market. Yet while Democrats boast a big advantage in voter registrations among Central Florida Latinos, they also know that in recent elections voter turnout has been dismal in Central Florida’s Hispanic communities. In the end, no one gets the vote.

To that end, Peñalosa said Florida Democrats and its allies, such as Respeta Mi Gente, began organizing efforts far earlier for the 2020 election than ever before, in June 2019, and were at 80% field operation a year out. They also are gearing up with more field staff, and with an emphasis of getting Spanish-speaking organizers into Hispanic neighborhoods.

“We’ve learned from our mistakes,” he said.