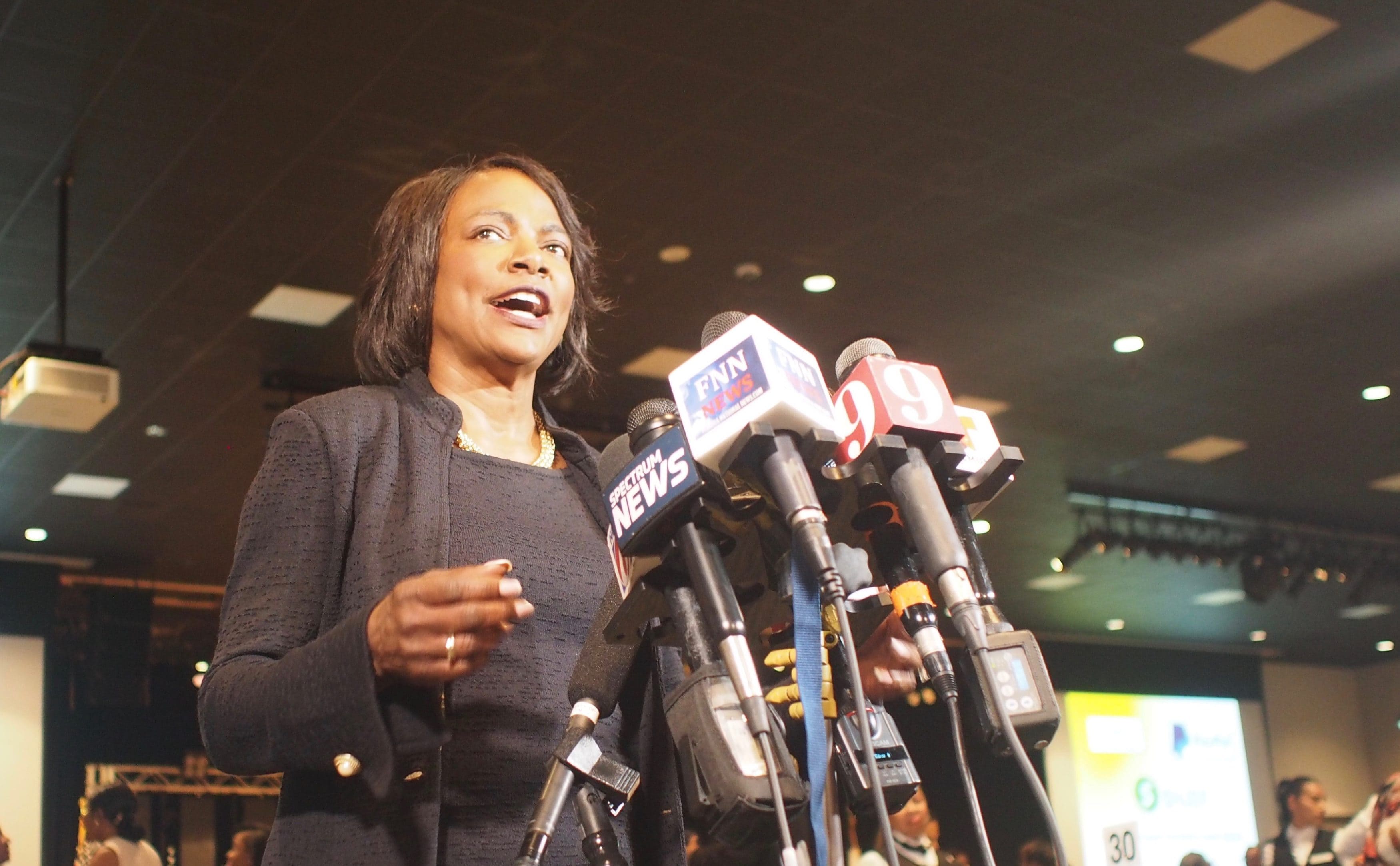 U.S. Rep. Val Demings, picked by Democratic leadership as one of seven House impeachment managers, vowed Friday in Orlando that the Democrats will find a way to hold President Donald Trump accountable of the charges for which he has been impeached.

Demings, of Orlando, conceded it would be “a heavy lift” to expect the 67 votes necessary to find Trump guilty and remove him from office, given the Republicans’ 53-47 advantage.

But she also said she views the trial more as being in the court of American public opinion than in that court that next Tuesday will form from the U.S. Senate.

“He will be held accountable,” Demings said of Trump. “He’s already been impeached. And he will be impeached forever.”

She described the personal opportunity of being essentially a prosecutor in a presidential impeachment trial as “a great honor.”

She then ducked questions in Orlando about whether she has any thoughts about, or if any Democratic candidates’ campaigns have asked her about becoming a vice presidential candidate this year.

“I have got to stay very focused on the work in front of me. We’ll have plenty of time to talk about going forward,” Demings said.

Demings is the only impeachment manager who served on both of the House committees that conducted the bulk of the impeachment proceedings last year in the U.S. House of Representatives, the House Intelligence and Judiciary committees. As such, Demings participated in every minute of those proceedings.

“I know every nook and cranny of the cases before us,” she said.

Demings has left no doubt for many months that she believes Trump is guilty of impeachable offenses by seeking to pressure Ukraine’s government into digging dirt on his likely 2020 election opponent Joe Biden, and then covering it up by refusing to allow any documents or witnesses under federal government control from going to the House impeachment investigation. Her blunt talk on such points might be one reason Pelosi selected her as a House impeachment manager.

Left undetermined at this point is whether the Senate and its Republican leadership, starting with Senate President Mitch McConnell, will allow for any witnesses or documents. She expressed outrage at the prospect that any trial in any forum would preclude witness testimony or documents.

“We as the greatest nation in the world should not tolerate it,” she said.

She would not comment on whether the Democrats have yet worked out a Plan B, should McConnell allow little case to be presented. But she also expressed confidence that it might not matter.

“He shall be held accountable,” Demings said. “I will do everything in my power to hold him accountable.”

The other six Democratic impeachment managers all are lawyers with deep experience as courtroom litigators. Demings is a cop, someone who started on the streets, became an investigator of both criminal activity and of internal affairs, then rose through the ranks to become Orlando Police Chief, before running for Congress.

“That’s really what we’re doing now. This is about wrongdoing by a person who has been given tremendous responsibility, who have been given sacred trust of the American people, and chose to abuse that. And then we began our investigation, chose to obstruct our investigation,” she continued.