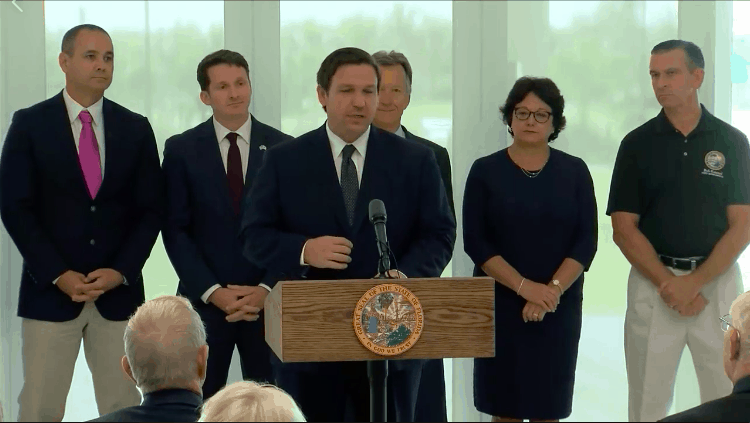 The standards go live on the state's website next week.

Gov. Ron DeSantis on Friday said the new set of Florida education standards to replace Common Core is complete. The changes include requirements children learn cursive, study the Constitution in grade school  and meet several measures in literacy based on grade level.

The Benchmarks for Excellent Student Thinking will be published on the Department of Education website next week. But a summary of recommendations and changes was made available shortly after a press conference in Naples.

Among the most notable changes were new expectations in literacy ranging from learning sight words in grade school to being able to comprehend Shakespearean sonnets before graduating high school.

But in some places, standards change downward. In one section that promises “No ‘Confusing’ Math,” a requirement for students to learn to “multiply a whole number of up to four digits by a one-digit whole number, and multiply two two- digit numbers, using strategies based on place value and the properties of operations” gets changed to simply multiplying four-digit whole numbers by a one-digit number with “procedural fluency.”

DeSantis spoke to supporters in Naples about the mission to replace Common Core. A year ago, he signed an executive order demanding the elimination of all vestiges of the derided standards.

What’s in the new standards will become more clear next week, but he promised a focus on literacy and civics, a long-held priority of the Republican leader. The new standards require teaching the U.S. Constitution in 5th grade, as opposed to 11th grade.

DeSantis managed to sneak an allusion to President Donald Trump’s reelection campaign slogan — that students must “understand the principles that make America Great.”

But much of the press conference was spent deriding the 2010 national standards BEST will replace. That showed the significant evolution in the politics of Common Core, originally adopted in some form by 41 states.

Former Gov. Jeb Bush championed the Common Core standards. Then-Republican Gov. Charlie Crist adopted them. Gov. Rick Scott enforced them as they were rebranded. And all this happened as a Republican-controlled Legislature championed accountability and high standards during a mission of education reform.

“It says something when teachers unions and Tea Party conservatives come together and agree we have a problem,” Eagle said, “and it’s Common Core.”

Many derided the “new math” associated with the standards. DeSantis noted Minnesota, when it adopted other Common Core standards, refused to adopt the math criteria. That state in the meantime has seen students regularly produce some of the best math test scores in the nation.

“As a nation we have flatlined,” he said.

Of course, that statement stood somewhat in contrast to state Rep. Bob Rommel, who touted that Florida’s K-12 education has risen to No. 4 in the nation. But Rommel also celebrated the new standards.

“We are continuing to improve education,” he said. “We will allow teachers to teach and students to learn.”

It’s unclear how the new standards will affect the testing regimen students go through in Florida schools, a regular complaint from critics of Common Core. DeSantis did say there would still need to be testing done to assess student learning.

But while much about the BEST standards remains unclear, lawmakers at the press conference expressed certainty they would improve education.