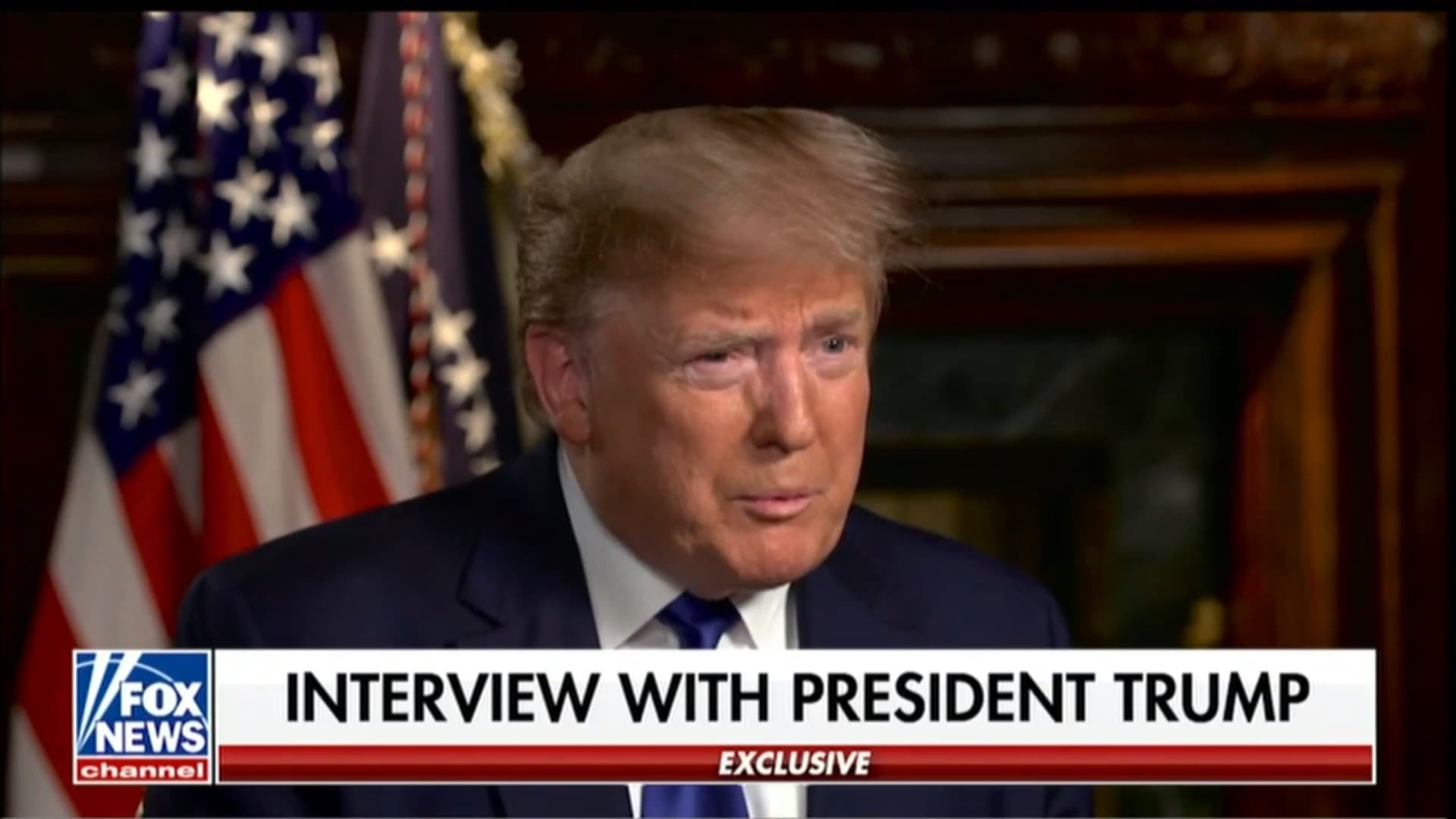 The President called him "Mini Mike" on Twitter Sunday morning.

President Donald Trump shared his thoughts on his Democratic rivals in a lightning round interview with Fox News’ Sean Hannity during the network’s Super Bowl pregame show Sunday.

“Mini Mike” is Trump’s tagline for his newest challenger, former New York Mayor Mike Bloomberg, who joined the Democratic primary race in November. The quip came in a Sunday morning tweet, ahead of the interview’s premiere, but after its recording.

Bloomberg’s campaign denied the accusation and called the President a “pathological liar.” In a campaign stop, the former Mayor shot back when asked if Americans wish to see a Twitter feud between the two.

“I stand twice as tall as he does on the stage, the stage that matters,” he said.

On Friday, the Democratic National Committee revealed Bloomberg’s refusal to accept campaign contributions made him ineligible under previous rules with fundraising thresholds. Entrepreneur Andrew Yang and New Jersey U.S. Sen. Cory Booker are among those who criticized the DNC’s rules, including its polling threshold.

“It’s very interesting. Cory Booker and all these people couldn’t get any of the things that Bloomberg’s getting now,” Trump said. “I think it’s very unfair for the Democrats. But I would love to run against Bloomberg.”

The former New York Mayor and billionaire philanthropist has skipped early Democratic nominating contests to focus on Super Tuesday. And in Florida, a St. Pete Polls survey released Tuesday found him second place in the state with 17%, behind former Vice President Joe Biden, who had 42% support.

The President also told Hannity that he will not postpone his State of the Union address, set Tuesday, ahead of his anticipated acquittal in the Senate’s impeachment trial. His treatment by the media has been unfair, the President said.

“Mostly it was unfair to my family,” Trump said. “My family suffered because of all of this, and many other families suffered also. It’s a very serious thing that should never happen to another president.”

And the President touted the economy, cutting taxes and the military.

“There’s a revolution going on in this country, I mean a positive revolution,” he said. “African American, Hispanic American, Asian American, we have the best numbers we’ve ever had.”

As for the travel ban to China, which began Sunday over the coronavirus outbreak, the President said the United States cannot allow thousands of people possibly carrying the deadly virus into the country.

“We’re offering them tremendous help,” he said. “We have the best in the world for that. We’ve done a tremendous job in many other instances on that, even recently.”

And as for his other Democratic rivals, Trump rehashed “sleepy,” “Pocahontas” and “communist” for Biden and U.S. Sens. Elizabeth Warren and Bernie Sanders respectively. He also questioned why Biden’s son, Hunter Biden, hasn’t been in the media spotlight.

“He went from having no job, no income, he had nothing — as you know he had a very sad experience in the military, he has nothing — to making millions and millions of dollars a year.”