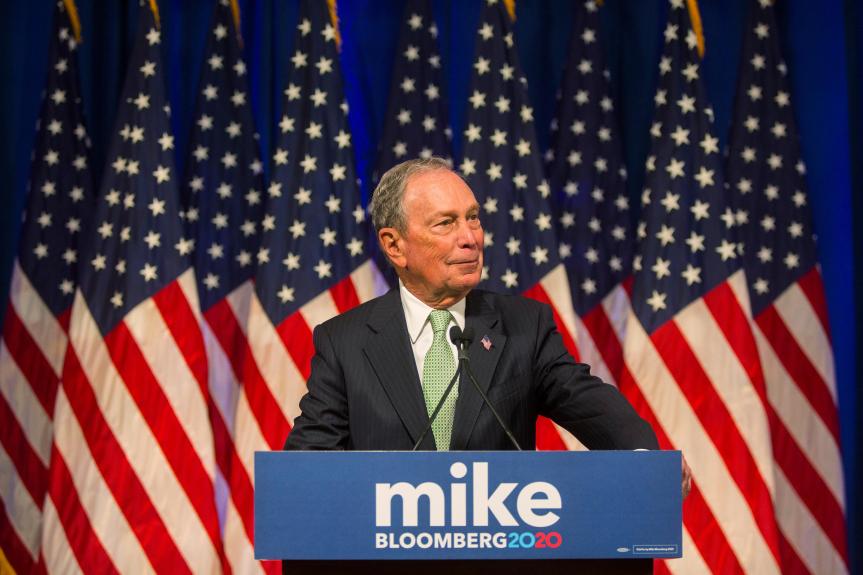 While gearing up to try to take Florida in the March 17 primary, campaign officials for Mike Bloomberg declared Tuesday they believe there are only two viable Democrats left, Bloomberg and Bernie Sanders, and charged that only Bloomberg could beat President Donald Trump in November.

“It’s very clear the Democrats have to consolidate around a candidate who has the ability to take on Donald Trump and win. It is quite clear to us … that we are really down to a race where there are three people left who can really be considered viable to be sworn into office next year, and that’s Bernie Sanders, Mike Bloomberg, and Donald Trump,” Mike Bloomberg 2020 States Director Dan Kanninen told reporters Tuesday. “And of that bunch, only Mike Bloomberg has a chance to beat Donald Trump in the November elections.”

Kosanovich laid out details of Bloomberg’s Florida organization, with 135 staffers, with a goal of having 200 by mid-March; 10 field offices already open and another 10 field offices set to open soon; and round after round of endorsement and surrogate announcements, most recently of former Chief Financial Officer Alex Sink. Soto laid out details of the campaign’s Hispanic outreach efforts, which is stressing the diversity of Florida’s Latino communities and the need to speak to people in each with both language and cultural understandings.

Kanninen laid out the Bloomberg campaign’s message for Florida: It’s over for Joe Biden, and the sooner his campaign and supporters realize that, the better chance the Democratic Party has to stop Sanders from getting the nomination and subsequently losing the November election to Trump. The other candidates, former South Bend, Indiana, Mayor Pete Buttigieg, Sens. Elizabeth Warren and Amy Klobuchar, businessman Tom Steyer, and Rep. Tulsi Gabbard were not mentioned at all.

The Bloomberg campaign’s message was dismissive of Biden and Sanders for very different reasons.

Sanders, Kanninen charged, is the most vulnerable candidate to lose to Trump in November. He said states like Florida will not be available to Democrats if Sanders is the nominee.

“If Democrats run a campaign with a candidate who cannot put Florida in play, then we have to have an inside straight to beat Donald Trump,” he said.

He charged that Sanders is succeeding in consolidating the Democratic Party’s left wing, and that could be enough to win the nomination if the more moderate voters don’t also pick one candidate — Bloomberg, not Biden, Buttigieg, or Klobuchar — to consolidate behind before the California primary on March 3 and the Florida primary on March 17. The delegate distribution rules could lead to what Kanninen called “a danger” that Sanders could grab an insurmountable lead, just with the left.

“Even Mike running a very strong second to Bernie in California, under the right circumstances, could result in Bernie having a delegate lead that is tough to match. I think voters should understand that there is really only a two-candidate race at the top of the Democratic field, and that stacking up votes for candidates that do not have viability either in Florida or in California in other Super Tuesday states is likely to perpetuate a Bernie nomination.”

Other campaigns either did not respond or offered only unattributable thoughts. One campaign argued that Bloomberg has managed to avoid any direct voter and media contact so far, and that the narrative about him will change when he is vetted by voters and media.

Biden’s campaign offered the same thoughts in a response given to Politico:

“Mike Bloomberg has not yet endured a single debate. He has not been on the ballot in early states or won a single delegate to the convention. He has spent the last week weathering headlines about sexual harassment at his company, the racist Stop and Frisk policy he oversaw and advocated for, how he attributed the financial crisis to the end of one of the worst housing discrimination practices, and his regular demeaning of President Barack Obama. It is a jarring but unsurprising level of arrogance for his campaign to suggest in any way that his position in this campaign is solid or assured,” Politico quoted Biden’s Spokesperson Andrew Bates.

The narrative Bloomberg’s campaign is pushing is that his rise in the polls is not just a result of hundreds of millions of dollars of TV and digital advertising, but of ground-game efforts and Bloomberg’s appearances in places outside of Iowa, New Hampshire, Vermont, and Nevada. He’s been to three events in Florida this year, and in Denver, Phoenix, Nashville, and Richmond, Va.

The ground-game efforts have included 2 million conversations with voters in the past month, Kanninen said. “We’ve seen growing momentum and enthusiasm for Mike’s candidacy across the country,” he said.