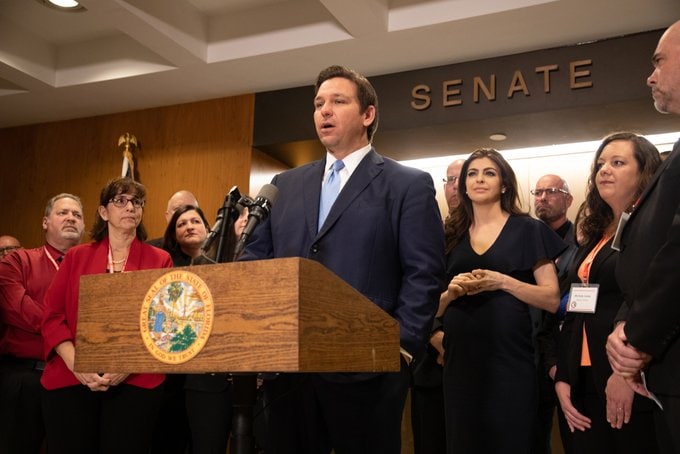 The FCADV saga now carries implications for other non-profit partnerships codified in statute.

Thursday evening’s Executive Order 20-44 outlines several reviews for all agencies to undertake and report within the next 45 days. And going forward, each agency must give annual reporters of partnered non-profits’ executive team compensations.

Those reports would go to the Governor’s office or the office of Chief Inspector General Melinda Miguel.

DeSantis and the Legislature have taken swift action against the Florida Coalition Against Domestic Violence (FCADV), which finally turned over documents last week to House ethics lawmakers and staff after more than a year of stonewalling. Lawmakers had teased that they would look into the state’s oversight of contracted independent groups, but the order marks the first substantive step taken beyond FCADV.

Speaking to the press Thursday morning, the Governor thanked the House for taking the lead on the FCADV contract repeal. But the he noted his budgets proposed putting domestic violence coordination directly under DCF not because the job is easy but because he wanted a check on an entity that has the power to choose its own board of directors and pay schemes.

“When I first came in, I told the folks in our office, ‘Let’s look at all these practices contracting everything, figure out what we can do better and figure out where there are inefficiencies,’ because these things build up,” he said.

Carr reportedly earned $761,000 annually, but the new documents showed she also earned more than $7 million in compensation over three years. Sections of those papers were also redacted despite the House Public Integrity and Ethics Committee’s request.

“We were asking for information. They just gave us the back of their hand. They didn’t want to participate at all, so obviously, that’s very troubling,” DeSantis said.

A third provision asks the agencies verify partnered non-profits meet state audit requirements and submit a corrective plan to the Chief Inspector General. Those plans would carry timelines to rectify non-compliance or other issues discovered.

Moments after the executive order went public, the House adjourned and Speaker José Oliva fielded questions from the press. He agreed with the executive order, called for greater oversight and called FCADV’s alleged abuse extraordinary.

“Anytime an abuse of this nature happens, and it happens somewhat right under our noses, we’re all tremendously concerned,” he said. “The extraordinary actions we took last week is because we realized what this all became — not only the audacity of the wasteful spending that went on, but then the reluctance to share information about it. These are public dollars.”

His chamber earlier in the day passed legislation (HB 1087), spearheaded by Miami-Dade Republican Rep. Juan Fernandez-Barquin, to free the Department of Children and Families from its legal handcuffs to FCADV. The Senate is expected to pass the bill on Wednesday.

“I want everyone here to know that if I get reelected, this is going to be the first of many battles against nonprofits to ensure that taxpayer money is being used efficiently,” Fernandez-Barquin said.