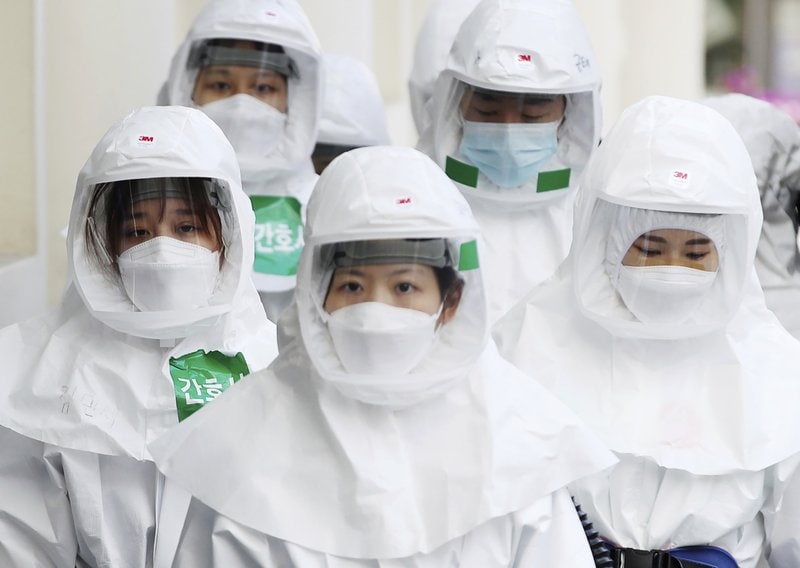 In an abrupt turnaround, President Donald Trump extended lockdown measures across the United States as deaths in New York alone from the new coronavirus passed 1,000. Moscow went on its own lockdown Monday as all of Russia braced for sweeping nationwide restrictions.

The health systems in Italy and Spain, which have been crumbling under the weight of caring for so many desperately ill patients at once, hoped relief was coming as infection rates drop each day. Together, the two European nations have seen more than half the world’s 34,000 deaths from the virus that has upended the lives of billions of people and devastated world economies.

In a situation unimaginable only a month ago, Italian officials were cheered when they reported only 756 deaths in one day.

In a stark reversal of his previous stance, Trump extended federal guidelines recommending Americans stay home for another 30 days until the end of April to slow the spread of the virus. The comments came after Dr. Anthony Fauci, director of the National Institute of Allergy and Infectious Diseases, said up to 200,000 Americans could die and millions become infected if lockdowns and social distancing did not continue.

“We want to make sure that we don’t prematurely think we’re doing so great,” Fauci said.

The U.S. now has more than 143,000 infections and 2,500 deaths, according to Johns Hopkins University, while around the world almost 725,000 people are infected. The true number of cases is thought to be considerably higher because of testing shortages and mild illnesses that have gone unreported.

Russian President Vladimir Putin has asked all citizens to stay at home,and Moscow Mayor Sergei Sobyanin began enforcing a strict lockdown for all city residents except those working in essential sectors.

“The extremely negative turn of events we are seeing in the largest European and U.S. cities causes extreme concern about the life and health of our citizens,” Sobyanin said.

He said an electronic monitoring system will be used to control residents’ compliance with the lockdown and warned “we will steadily tighten the necessary controls.”

Moscow, a city of 13 million, accounts for more than 1,000 of Russia’s 1,836 coronavirus cases and the numbers have been rising rapidly. Prime Minister Mikhail Mishustin has told regional governors to prepare for the same strict lockdown as the capital.

In Italy, which has seen by far the most deaths from the virus worldwide, officials expressed cautious optimism that the drastic measures they have taken to keep people apart are having an impact.

Italy has reported 97,689 infections and 10,779 deaths so far, but on Sunday said the number of positive cases in the last day increased just 5.4%, and the number of deaths have shifted down about 10% a day since Friday.

’’These are big changes that reflect the fact the health system is responding and of the impact of the measures that have been put in place,″ said Dr. Luca Richeldi, a lung specialist, told reporters. ’’We are saving lives by staying at home, by maintaining social distance, by traveling less and by closing schools.″

Experts say the critical situations in hospitals in Italy and Spain will be soon heading toward the United States.

Coronavirus patient Andrea Napoli, 33, told The Associated Press he didn’t remotely expect that he would be hospitalized, struggling for his life from the virus, since he was a young, very fit man. But what he saw at a Rome hospital shocked him.

While he was being treated, three patients died in his ward. He saw doctors stressed and exhausted from the long hours, out of breath from pushing equipment around, dressed in protective masks, suits and gloves.

In Spain, where 6,803 people have died and 80,110 have been infected, hotels have been converted into makeshift hospitals and a Madrid ice rink has been turned into a temporary morgue.

For most people, the coronavirus causes mild or moderate symptoms, such as fever and cough. But for others, especially older adults and people with existing health problems, the virus can cause severe symptoms like pneumonia and can be fatal. More than 152,000 people have recovered.

China’s National Health Commission on Monday reported 31 new COVID-19 cases, among them just one domestic infection. At the peak of China’s restrictions, some 700 million people were in areas ordered to stay home, but those rules are easing.

New York state remained the epicenter of the U.S. outbreak, with the vast majority of the deaths in New York City. But infections were spiking not only in cities but in Midwestern towns and Rocky Mountain ski havens. West Virginia reported its first death, leaving only two states — Hawaii and Wyoming — with none linked to COVID-19.

The pandemic is also taking its toll economically around the world.

A lockdown in India covering the country’s 1.3 billion people has put day laborers out of work and left families struggling to eat. With no jobs, those living in the country’s crowded cities are walking back to their native villages.

In Europe, budget airline EasyJet grounded its entire fleet of aircraft — parking all 344 planes — amid a collapse in demand due to the COVID-19 crisis.

Australia announced a 130 billion Australian dollar ($80 billion) plan to subsidize businesses, paying up to 6 million people a minimum wage for the next six months.

“We want to keep the engine of our economy running through this crisis,” said Australian Prime Minister Scott Morrison.

previousFlorida succeeds over other states in acquiring supplies for coronavirus response