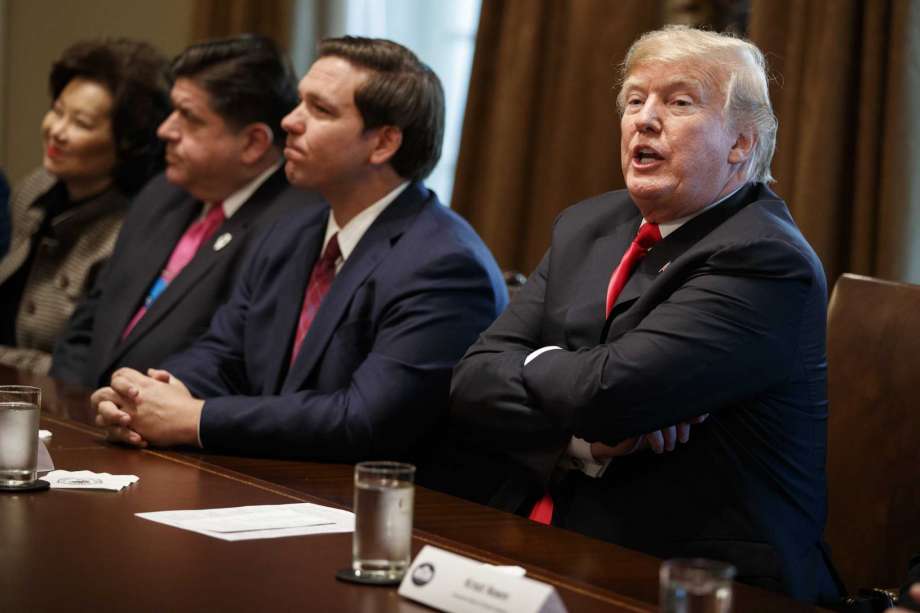 Ron DeSantis has been following Donald Trump's lead throughout the coronacrisis.

With Florida and the rest of the United States moving past coronavirus economic restrictions, the President and Governor met Tuesday morning.

At the White House Pres. Donald Trump and Gov. Ron DeSantis sang from the same hymnal regarding opening up America safely and quickly.

DeSantis looks likely to make a move past the current executive order, which expires Thursday.

“We’re going to make an announcement tomorrow,” DeSantis said. “We’ll announce it tomorrow about the next step forward.”

The “next step is going to be done thoughtfully, in a measured way … I do think there’s a path to do that,” said DeSantis, who noted that despite all the activity in the state ahead of coronavirus shutdowns in March, “we didn’t have outbreaks.”

DeSantis also noted, regarding the Re-Open Florida Task Force currently finalizing recommendations, that they all want “innovative ways to do this safely.”

“It isn’t going to happen overnight,” DeSantis said, but it will happen.

Expectations are for restrictions on beaches, restaurants, and elective surgeries, among a swath of other categories, to be relaxed. However, these changes will not be uniform throughout the state necessarily, with hard-hit South Florida suffering more from COVID-19 than the rest of Florida.

The Trump administration has trumpeted Florida as a success story of how to flatten the curve while following White House guidelines. Press conferences have seen laudatory defenses of the state’s COVID-19 dashboard website as comprehensive and Jacksonville’s decision to reopen beaches.

On Tuesday in Washington, DeSantis and Florida were extolled as role models in the path forward by the President.

Florida is ready to move forward, DeSantis said, in a “data-driven” way.

“And that’s for a reason … he’s doing a very good job,” Trump added.

Trump lauded the accelerated road construction in Florida, which DeSantis said would drive “reduced congestion” as the economy opens up.

The Governor stressed testing, a common theme of in-state press availabilities. Walk-up and drive-thru testing have been hallmarks of Florida’s approach, and they were mentioned by the Governor ahead of the media availability shortly after noon.

The Governor also noted that despite not issuing “draconian orders,” Florida has outperformed other states, with a “tailored and measured” approach done in a “safe way.”

“We have challenges,” DeSantis said. “But I have less than 500 people … on ventilators as of last night.”

The Governor is confident the state has the resources to handle a second wave in the fall.

Whereas the Governor of Florida’s northern neighbor, Georgia’s Brian Kemp, piqued the President with rushing toward a too-quick reopening, no such qualms permeated the Trump/DeSantis mutual admiration society Tuesday morning.

Unremarked upon during the joint appearance were failings with unemployment insurance systems , such as Florida’s, that the President blames on “Democrats” and “old computers.”

Also ignored by the two chief executives were comments by House Speaker Jose Oliva, a Hialeah Republican who sent out an official email with embedded articles saying coronavirus-driven shutdowns were not just “pointless,” but also “criminal.”