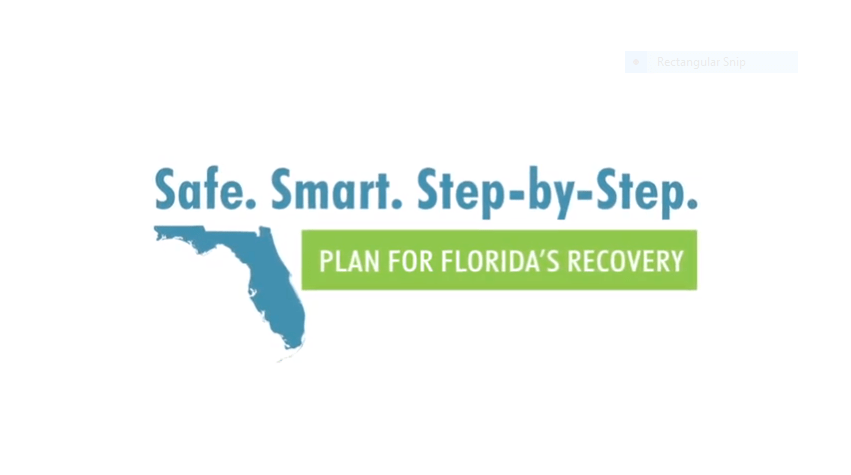 The videos, comprised of recent favorable media events, suggest the messaging strategy to come, with a new logo and slogan: “‘Safe. Smart. Step by Step: Plan for Florida’s recovery.”

Tailored and Measured Approach, a FOX 35 stream of the Governor’s meeting with Pres. Donald Trump, was perhaps the most forceful and effective of all of DeSantis’ recent pushback against the temptation to impose “draconian orders.”

The media, he contended, predicted an Italy or New York scenario.

Trump and DeSantis sang from the same hymnal regarding opening up America safely and quickly.

“We’re going to make an announcement tomorrow,” DeSantis said on Wednesday. “We’ll announce it tomorrow about the next step forward.”

The “next step is going to be done thoughtfully, in a measured way … I do think there’s a path to do that,” said DeSantis, who noted that despite all the activity in the state ahead of coronavirus shutdowns in March, “we didn’t have outbreaks.”

The Knows the Science clip includes a doctor from a media event, stressing the safety of moving into re-opening the economy.

“I’m comfortable that our Governor knows the science,” the clip from an Orlando press conference last weekend stated.

The final video, Dr. Birx praises Florida’s approach, sees a member of the White House coronavirus task force lauding the Governor and the state for deciding to “proactively test” in nursing homes.

The Governor has contended, even from the earliest days of the crisis, that the old and those with underlying health problems were most prone to serious illness or fatality. He has vowed to continue testing in nursing homes, a process currently handled by National Guard strike teams.